Crashes from Thomas the Tank Engine

Good idea, but I have another soundtrack in mind: http://youtubedoubler.com/9QAr
(Mute left video)

i’ve seen a lot of thomas episodes and i am constantly amazed at how inept thomas is at his job (despite the fact that there are engineers in the cab who aren’t doing anything to stop him from screwing up). thomas is never really punished for destroying cargo and potentially injuring and killing thousands of people. the newer cgi thomas episodes are a little more tame than the miniature live action series. still i can’t help but think thomas would have been decommissioned and scrapped within the first few episodes for overriding his human controllers and causing ignorant mischief all over the island.

I’m still more concerned about what really happened to the population of Great Waterton.

Here is a link to an article about the economics of Sodor Island. My art work is the featured image titled Thomas the Train Wreck. www.stevemaher.net

I had the exact same idea… different song 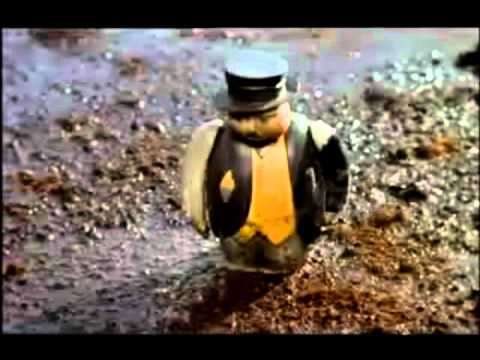 YouTube Doubler: i was bored so i decided to make a compilation to the crashes on thomas and friendsThomas is owned by HIT Entertainment VS.

Sir Toppam Hat is the real problem. What kind of negligent monster would keep giving more chances to employees who had caused countless train derailments?

And let’s not even start on his mismanagement of resources. He once assigned an entire locomotive to deliver a single balloon to a carnival. And that train had to make the trip FOUR TIMES before it finally succeeded.

I wonder if the crashes were bloodier and more destructive from the Carlin era, or the Starr era?

As someone who grew up with a Hornby train set in the home, I always thought there were too few needlessly dramatic train crashes in the Thomas series.

When it comes to safety, the Sodor Rail Authority has a dismal… track record.

I tellya, the entire Isle of Sodor appears to be utterly uninsurable.

The show always bugged me as a Yank. Every time things go wrong (and things go wrong in every episode), it’s a direct result of some engine or another showing a bit of independent thinking, pluck, ambition, or otherwise trying to rise above its station. The entire series seems aimed at keeping every cog in the great machine of society oiled and in its place. Maintain the status quo, perform your duty, don’t make any waves, and for the love of God don’t start getting any funny ideas that you might be slightly better than anyone else.

Successful as it is in the States, it’s very obviously not aimed at an American audience. U.S.-bred children’s programming is full of specialness, uniqueness, social mobility, and the triumph of the underdog. Thomas and his pals exhibit only socialist virtues such as teamwork, humility, cooperation, and serving the common good. I like all that stuff as much as the next lefty, but I wish Sir Toppam Hat didn’t try so hard to hammer every shred of individuality and ambition out of the engines. He’s a regular brick in the wall, he is. I pity those trains that work for him.

Except Gordon, of course. That arrogant, self-satisfied show pony deserves every gallon of mud that ever clogged his boiler.

The biggest compliment you can give to a steam train seems to be that they are a “really useful engine”, which backs up your point somewhat. You didn’t mention the fact that the evil diesels are generally black, and the good steam engines generally aren’t. It’s not universal, Donald and Douglas and some other steam engines are black while some bad characters like Diesel 10 and Old Stuck-Up are different colors, but it’s possible to make an argument that black is bad in Sodor.

Coming from the British side, I often found the characters in US TV shows to be too happy and enthusiastic about everything. It was nice to see some counterbalance when Daria came out.

I admit, this rendition, too, has its moments.

A glib response I need too make is reminiscent of Atlas Shrugged, all the pertinent problems of railway management stemmed from faulty rail, inept crews and the sort that lead too crashes. Until Readon Steel came along and James Taggart and his cronies put the hooks in that, hehe. Great novel. Carry on.

That’s exactly right. The trains are treated like puppies, and show a puppyish need to be recognized and appreciated by their masters. Since “really useful” is the most praiseworthy attribute in their world (rather than “clever” or “creative” or “independent thinker” or “compassionate toward others”), it seems to be the only behavior that gets rewarded. The first couple of episodes I saw, I thought it was perfectly normal. But as time went on, I quickly came to realize that just about every single episode of the show (I never read the books) reinforces this theme.

And I hadn’t noticed anything about the trains’ colors in any racial sense. But now you mention it, yeah. All the steam engines are brightly colored except for a bit of black around the boiler. The diesels generally have a much more realistic paint scheme, which ends up being mostly black.