Crockpot cookbook recalled because recipe could cause explosion

hmm off to the thrift shop for a crock pot… FOR SCIENCE!

Suffering for your art is nothing new, but wear some safety equipment just to be sure.

Cooking condensed milk in its can… is this not, essentially, dulce de leche? Whatevs. It’s made me hungry. But play safe, kids!

I was going to say the same thing, although, since it’s not really an authentic recipe for dulce de leche, it may as well be “Silky Caramel,” I guess. Whatever you call it, though, it’s delicious.

Do not let the water boil away. Or there could be a visit to the emergency room and lots of work scrubbing caramel off of the ceiling in your (or your roommate’s future) Trust me on this.

edited to add: Also, don’t put a nylon jacket down on top of an operating carbide lamp. Melted nylon is very sticky.

Caramelization is the browning of sugar, a process used extensively in cooking for the resulting sweet nutty flavor and brown color. The brown colours are produced by three groups of polymers: caramelans (C24H36O18), caramelens (C36H50O25), and caramelins (C125H188O80). As the process occurs, volatile chemicals such as diacetyl are released, producing the characteristic caramel flavor. Like the Maillard reaction, caramelization is a type of non-enzymatic browning. However, unlike the Maillard rea...

Since flavor change is coming entirely from maillard reactions, it’s not technically a Silky Caramel either

Encase creamy ice-cream and caramel within a dark chocolate mould for a magical melting moment this Christmas.

Or the anarchist crockpot, am-I-rite?

You can it just takes longer. You can make Dulce de leche in an immersion circulator. At around 185f. You can do it right in the can, but most recipes will recommend moving to jars for legal reasons. 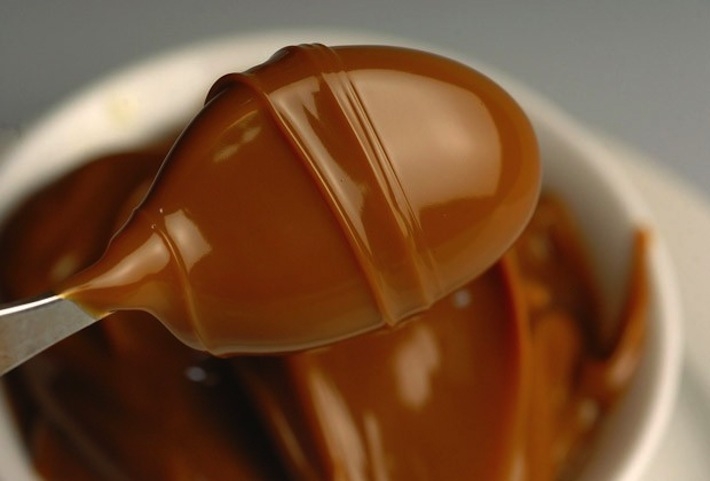 It takes 15 hours or more though. You can also caramelise other things this way. Things you normally wouldn’t think you could caramelise. A pastry chef friend of mine caramelises white chocolate in Mason jars. Then aerates it and tempers it right in the jar. The result is insane. Tastes like caramel. Has the texture of a much better made Aero bar.

I remember this as being an easy recipe for fishermen stuck on their boats for extended periods. If I recall though, they cooked it until you could dump it out and nearly slice it. (This was from a LONG time ago and I could be misremembering the end result.)

Suffering for your art is nothing new, but wear some safety equipment just to be sure.

As a kid, working in a pub we were all up one end of the kitchen, chatting whilst getting on with stuff when the first of about twenty cans of condensed milk blew the lid of the enormous, and now dry, saucepan they were cooking in (ready to make banoffee pie with). I was the one sent down the kitchen with only a pan lid to protect me, in order to turn the gas off.

A few years later, my brother is at university, when he gets the great idea to make himself some banoffee pie, so on goes the stove, and the condensed milk goes into the pan, and then he went off and got stoned.
A couple of hours later, hearing the bang, he goes in to find caramelised and burnt milk spread across the shared kitchen. Worst of all, the pan has jumped off the stove and burnt a neat round hole in the vinyl.
Cleverly, he and his flatmates pulled the fridge out, cut a piece out of the vinyl flooring underneath, and carefully fitted it where the burnt section had been. The managed to get their deposits back at the end of the year so it must have worked.