Who are “we”? If there isn’t any group specified, I need to assume that this is merely the author speaking for themselves.

There may be more to the story. Word is the “cultural appropriation” bit was made up out of whole cloth by the teacher. A student who went to the class had a post about this:

The University of Ottawa yoga controversy: a disabled person’s response

The recent wave of media coverage of the cancellation of a yoga class at the University of Ottawa is a perfect illustration of everything that is wrong with mainstream media. Some context: sometime…

The teacher also seems to have some interesting views about universities and immigrants.

Sensing there's maybe more to the Ottawa Yoga story seeing as this is the teacher's FB page. https://t.co/CIxpudR0E1 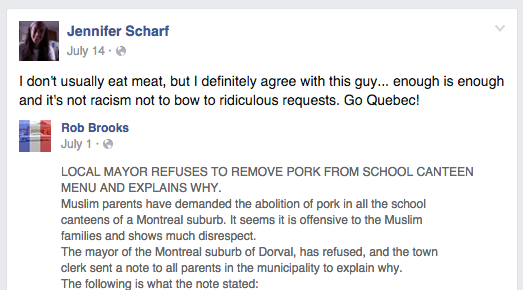 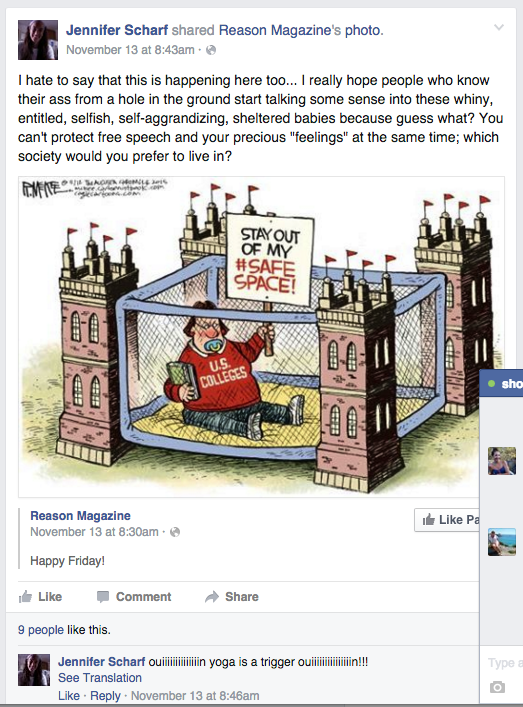 Can someone explain Cultural Appropriation to me slowly? Is this the idea that we (any group of people) shouldn’t act like other types of people? Or that we should not claim to have invented particular ways of acting? I thought I kind of understood the Cyrus Twerking claim, but now I feel like I don’t know what’s going on.

I’d be interested to know where the concern about yoga being OMG cultural plundering originated, and why.

Did somebody, or some group, assume that it had been plundered to feed the taste for orientalist trinkets; without specific evidence one way or the other; but knowing the fact that we certainly don’t mind doing a little plundering if we fancy a new orientalist trinket, and so the odds seemed good?

Was there some sort of attempt to de-exoticize the deliberately ‘Indian’ export that did amount to appropriation(albeit one where an export was whitewashed, rather than something plucked from its native land and shipped back for our amusement)?

Did people who were looking for authentically plundered foreign trinkets play up the degree of appropriation, first for pleasure and later as a matter of lingering guilt?

“We” are the readers of the blog, english-speakers, demographically predominated by members of “the West” ?

The murkygreenwaters piece remains somewhat unconvinving for me, as it also seems highly biased, and it’s specualtions seems to contradict emails that have been provided to the media.

In this case, the use of the term seems unfounded.

But if you’re actually interested, this is a pretty good primer:

An Open Letter to Non-Natives in Headdresses

tânisi! I see you are confused about what constitutes cultural appropriation.  I would like to provide you with resources and information on the subject so that you can better understand what our c…

Does this shame extend to the member of the village people also? Felipe Rose (born January 12, 1954) is a founding member of the disco group the Village People. In the group he represented the Native American from 1977 through 2017. Rose (birth name: Felipe Ortiz Rose [note 1]) was born in New York City to a father who was a Lakota Sioux and a Puerto Rican mother. He was raised in Brooklyn where he displayed an interest in the arts during his childhood. His mother was his main inspiration as she herself had been a dancer for the Copacabana during the 1940s a...

Considering that he’s Lakota, I don’t think so?

Fair comment. I didn’t know much about the band.

Finally, something SJW and Fringe Fundamentalist Christians can agree on! They too think it’s a plot to introduce barbaric pagan rituals into Christian lives.

Appropriation or not, Yoga is a great exercise if done right and can really get someone limbered up an increase strength. I used to do it a lot.

I’d get all bent out of shape about this issue, but I wouldn’t want anyone to think I was doing yoga.

But has he actually earned it as per your link?
I suspect not.

Yoga is a religious practice that is interrelated with the Hindu faith. There are some meditations and exercises associated with it, and most non-Hindus think the exercises are all there is to Yoga, but that’s only a tiny teaspoon from a deep and rich well. I have met people at the local temple who have made yoga the focus of their entire lives yet claim they don’t do the exercises very much.

That being said, Hinduism is an appropriative, syncretist religion and Hindus of my aquaintance are sincerely puzzled by the idea that anyone would be alarmed by cultural appropriation.

I hereby give all people everywhere the right to appropriate my culture for any purposes they like, including wearing silly hats based on my most sacred headgear. Enjoy yourselves and send photos.

In almost all cases, cultural exchanges and cultural inspirations are a good thing - it is the very engine of culture itself and civilization. Without it, cultures stagnate. However in rare instances typically involving oppressed cultures, a more powerful culture’s understanding, or misunderstanding, or version of that other culture’s culture has enough of a megaphone that it starts drowning out the underdog culture’s own ability to define and maintain itself. Maybe a bit like if you were slandered but no-one listens to you try to tell them the truth because the slanderer is more popular than you and has everyone’s ear. (Or more likely, instead of one liar, it’s a hundred friends who genuinely like you and are being honest, but they misinterpreted something you did because you knew something they didn’t, and now because their version of events is so widespread, it’s taken as fact and your version is lost in the chatter. If the accepted story reflects badly on you then perhaps you unfairly can’t get a job because of that story, even though everyone is doing what they see as good.)

Of course, lots of cultural exchanges and influences upset people but are still a good thing nonetheless. For example many people tie their self-identity up in a subculture or look or style and then feel robbed of identity when unique trappings of their subculture become more popular and then become mainstream and then stores start selling mass-produced versions to kids. Generally those hurts (while keenly and painfully felt) are just part of living and growing up and not problematic; culture is not property to be owned, and likewise cannot be “stolen”, even if it makes you mad that kids are buying “your” style without understanding it, or you worry that you now look like some empty-headed fad-follower instead of being unique. But some cultural interactions, when a massive power differential is involved, can accumulate lots of little (often-innocent) things into something that is clearly creating or exacerbating a sustaining problem, is clearly doing something ugly. (This is also usually completely unintended, but a problem nonetheless).

When people say “cultural appropriation” they mean “cultural misappropriation” - because even though almost all cultural appropriation (in the face-value sense) is positive in the long run, people use the term to refer specifically to the rare exceptions that are problematic.
Many people who are aware they are in the powerful culture do not want to contribute to injustice, and sometimes that results in over-zealous inappropriate attempts to “protect” other cultures, and/or giving short shrift to how important and positive it is to constantly make cultural cross-influences. But, y’know, there’s a lot of fuzzy grey and disagreement spanning the distance between what is hard knocks and what is systematic oppression, so it’ll always be a bit messy.

I’m not the cultural appropriate police.

But I do find it interesting that he seems to have changed his costume in recent years to something that looks a little more authentic and less Walmart-halloween.

Completely off topic, but his appearance on Wait, Wait, Don’t Tell Me, was pretty dang funny.

That article is quite a mess. Starting from the uncritical acceptance that the U of O CSD’s cancellation was based on concerns of appropriation in the first place. And then going on to easily checkable facts being apparently quite wrong.

“Vivekananda’s yoga didn’t involve the asanas, or poses, that we know as yoga today, because asana-based yoga is a modern phenomenon”

“Patanjali’s Yoga Sutra (4-2nd century BC) does not mention a single asana by name, merely specifying the characteristics of a good asana.[38] Later yoga texts however, do mention the 84 Classic Asanas and associate them with Shiva”

Modern as in 4th century BC, eh? Something doesn’t add up here…

For the vast majority of people, yoga is exercise. For some people it is also a philosophy. Anything can be turned into a religion, and some leaders who run extremist versions of organized religions – which like to control people and keep the money rolling in – do not like competition, so they point to the offenders as “bad” or “evil” and sometimes try to stamp out that competition. These are the same people who are concerned about their “freedom of religion” being infringed upon.