Dare you enter this site to see how many weeks of life you have left?

I’m in my final third. I’m strangely okay with this.

Not to be confused with : 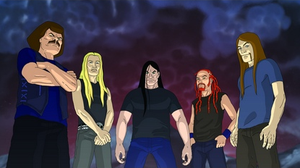 Dethklok is a fictional death metal band featured in the Adult Swim animated television series Metalocalypse. The first official Dethklok album was released on September 25, 2007, entitled The Dethalbum. The album debuted at number 21 on Billboard Magazine's Top 200 list. The band released Dethalbum II on September 29, 2009, and toured with Mastodon, High on Fire and Converge. The band's third album, Dethalbum III, was released on October 16, 2012. The soundtrack to the special episode, Metalo...

To quote Dave Lister, I’ll go out the way I came in - kicking and screaming.

‘I plan to go out the same way I came in: naked, screaming & covered in blood!’–Anonymous

‘I plan to go out the same way I came in: naked, screaming & covered in blood!’–Anonymous

I hope to die peacefully in my sleep like my grandfather, not screaming in terror like the passengers in his car.