wonder if that’s Jimmy’s dad? wouldn’t surprise me if Jimmy was of Pentecostal stock. sounds about right, actually.

Well cars were insanely dangerous contraption back then, although I think they were probably most worried about unsupervised hanky panky in the rumble seat.

Early cars really were “horseless carriages”, and they were very much just as dangerous. You might find it surprising, but carriage accidents at speed were not uncommon, and often incredibly fatal.

The key thing to remember is that traveling at speed was something very new to the world. You can easily find references in literature of the 19th century which describe how exhilarating people felt it was to top out at 30 or so miles per hour on the fastest horse powered conveyances - literally the fastest a person would ever go in their entire lives outside of the faster railroad lines (which of course you can’t personally control the route of, making it harder to crash one).

With early motor vehicles making upwards of 50 and 60 miles per hour, people were going faster than ever before, with very little of the training and preparedness to handle it that we take for granted today. And as you mention, the cars themselves were total deathtraps, with pretty rudimentary braking and steering systems, no protections against skidding or rolling over, and solid metal construction that doesn’t absorb the impact of a crash, but instead transfers it into the passenger.

The penalty of transgression? What transgression? Does the Lord ruthlessly enforce the speed limit? Or could it be like Mencken said - the haunting fear that someone, somewhere, may be having fun?

(which of course you can’t personally control the route of, making it harder to crash one).

It was hard to personally crash one, but just as with the other methods of transportation, trains used to be a lot more dangerous. Getting all of the cars to brake simultaneously has been a long-standing issue since the very early days: http://en.wikipedia.org/wiki/Westinghouse_Air_Brake_Company

If I remember my Driver’s Ed lessons correctly, you should always keep both hands on the wheel when you’re drunkenly racing across the train tracks a split second before a passing locomotive.

Plus, no seat belts. You can tell by the way the corpses are sprawled under the overturned vehicle.

Seat bets are a left-wing plot. Ralph Nader is stealing our freedom.

Thank goodness his repeated attempts to be elected president have been thwarted by the eternal vigilance of Ross Perot piloting Mecha Jesus.

I like how Death has “DEATH” printed on his arm, in case the reader was unclear on the symbolism of sinister black-robed skeletons.

Well cars were insanely dangerous contraption back then

Ha! This is great! I was just listening to the back catalog of the 99% Invisible Podcast and just heard the episode about the dangers of the early automobile and how pro- motorists conspired to change that view.

Give it a listen: 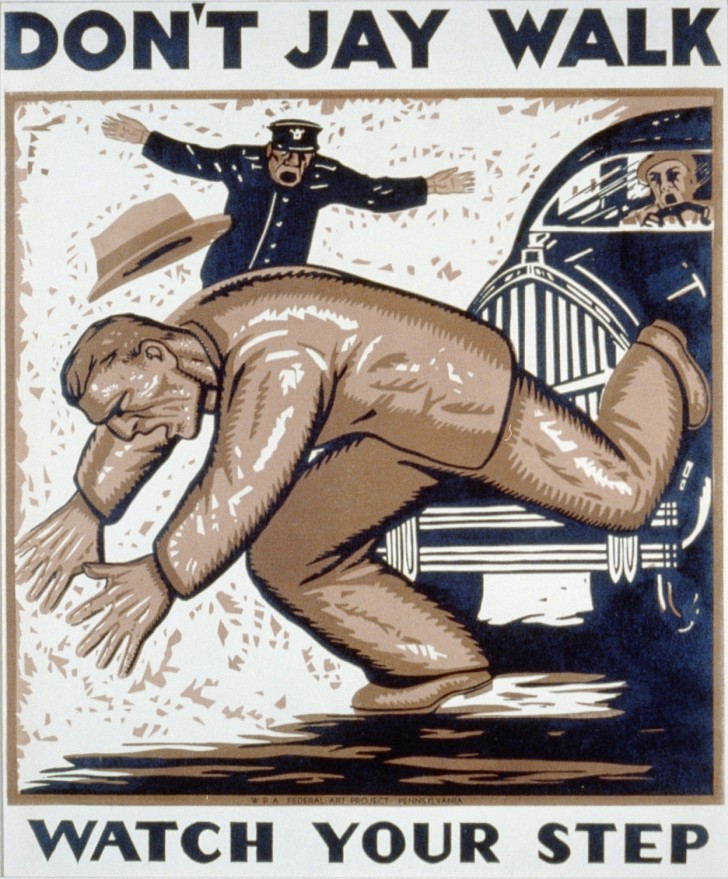 On the streets of early 20th-century America, nothing moved faster than 10 miles per hour. Responsible parents would tell their children, “Go outside, and play in the streets. All day.” And then the automobile happened. And then automobiles...

I got curious about just how much more dangerous cars were back then, so I looked up statistics on U.S. motor vehicle deaths, because I’m a nerd. There’s some interesting numbers in there*, but the closest to an absolute measure of the dangers of driving is “deaths per 100 million vehicle miles traveled.” In 2012, when (IIRC) cars were still the leading cause of death for kids aged 10-19, the deaths-per-100-million-VMT was 1.13. In 1921, the first year they recorded VMT, it was 24.09. Yikes.

*Deaths per capita peaked in 1937, then dropped hard, then peaked again in '41, then dropped hard again. The second drop I would guess was due to wartime rationing, but I can’t figure out why it would fall by 18% between '37 and '38, then rise by nearly as much between '40 and '41.

Yeah, well you had intersections with no signals. collisions with horses (which will kill you), collisions with cows (ditto), headlights putting out about 5 candle power (literally), steering column that would impale you just while parking, no seat belts, braking distances measured in miles, frequent outright mechanical failure of tires and vehicles every couple miles, no guard rails, no trauma center or life flight, and no cure for syphilis ( and that shit would kill you). Also in the 1920s paved roads were largely unknown outside city limits, and cars were still using paths cut into the landscapes by wagon trains.

Well a bad driver can only die once.

Of course DEATH must be labelled, else one might easily mistake it for the God of Infrastructure.

a bad driver can only die once.

There’s poetry implied in that, with a line beginning Whereas

Wait…the bible doesn’t have any death entity or grim reaper does it?

The sin of fun or pleasure that doesn’t stem directly from God/the church, of course.

If you’re serious, then I could point to at least two examples. One being the angel of death, that god sent to kill all of the Egyptian firstborns during the final plague in the Old Testament account of the Jewish Exodus from Egypt.

The second example is that of the fourth horseman of the apocalypse in Revelation, who is referred to as Death, along with the three previous horsemen of pestillence, war and famine.

The modern depiction of the grim reaper doesn’t bear any resemblance to the prior two figures though.