NOW can we get DOJ to go after the police union?

Wrongful Death / Negligence lawsuits need to come directly out of the Police Pension fund. Until they do that, the general public & municipalities will be on the hook every time a cop goes murder/rouge.

Lawsuits are paid by insurance municipal policies; what I like to refer to as the legal bookies.

Legal fees, on the other hand, come from police unions. Gut those, and we get more and better prosecutions. Bad cops get kicked of the force and can’t simply hop to a new city.

/s Awesome. I’m sure the police are shakin’ in their boots.

Democrats love to threaten “we’re totally gonna probe” and say it like they’re Darth Vader, sending those super-explodey droid emissaries throughout the galaxy, and that someone should feel threatened.

However, the “probe” we’re likely to get is the same kind that you do when you poke a marshmallow Peep to see if it’s stale enough to eat.

The efforts to present this as a “rogue cop” event are totally destroyed by the fact that all the cops on the scene completely lied about every aspect of what happened - even knowing that it was captured on their body cams (presumably expecting that either no one would look - or care), and it’s only because bystander video came out before the report was even written that it wasn’t swept under the rug.

It still boggles my mind how unconcerned the cops were about telling complete lies, knowing it was captured on their video, on security video, on video by multiple bystanders. They really didn’t expect to face consequences - and they may not, beyond Chauvin as the scapegoat. They got fired, and charged as accessories (though I haven’t read anything about that lately), but that doesn’t mean much. The police union there apparently has a very high success rate at re-instating fired officers (even after being fired multiple times, even after criminal convictions), and has been working to get them back on the job.

Cops have entrenched themselves as the most militant of all unionists in our current Bizarro-world “socialism for the overseers” labor movement.

Society can’t get rid of cop unions until the other unions repudiate them and get out of the way. Right now we’ve got all the mainstream labor federations ready to jump on the grenade to save their brothers in blue from the inconceivable injustice of at-will employment. 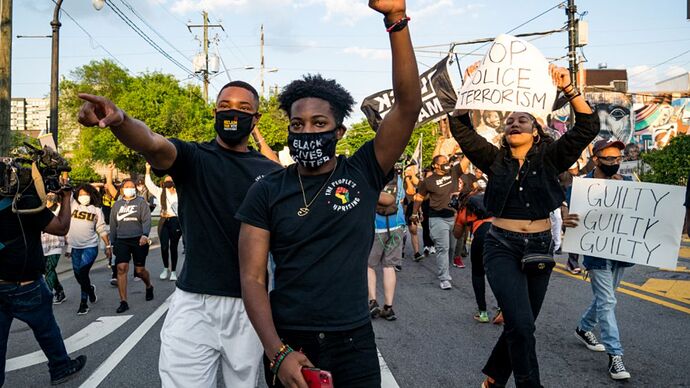 I never want to be so woke that I’m unwilling to celebrate small victories.

Is Minneapolis uniquely awful though? Hopefully this can be a wedge.

Surely the Police Union is a target for a RICO Case from the FBI.

Minneapolis, while not uniquely awful, is especially awful. Its top tier awful, but being Minnesota is less brash about announcing it and instead relishes it in a highly passive/aggressive manner.
(From Minneapolis, in case you wondered)

Reform needs to come from the top down. Beat cops aren’t going to be the ones who push for change and accountability. The people paying the bills might.

To work is really needs to come from both directions. A (relatively) liberal establishment pushing for change seems in some cases to just make the reactionary beat cops just circle the wagons, add punisher skulls and thin blue lines to their uniforms and forget even more the idea of policing by cnsent.

If we wait until the cops themselves decide it’s time for systemic reform and accountability it ain’t gonna happen.