Originally published at: Disneyland and Disneyworld are reimagining Splash Moutain to distance it from Song of the South | Boing Boing

Although the Princess and the Frog has some problematic elements in and of itself (Disney’s first black princess doesn’t remain black for much of the film) I absolutely love the movie (New Orleans, Randy Newman, and one of my favorite villains) and am glad to see that the Mouse is updating a ride to feature those characters and hopefully songs.

Finally leaving the remnants of Song of the South in the past is best for everyone.

Dumbo is typically the first film that comes to mind that prominently features negative Black stereotypes in the form of the crows. However, Disney’s Song of the South takes the proverbial cake.

Unfortunately there’s strong competition for that title if you include some of the earlier animated shorts. I’d argue that the 1933 film Mickey’s Mellerdrammer has some even worse depictions. Mickey and other characters are performing a scene from Uncle Tom’s Cabin in literal blackface. 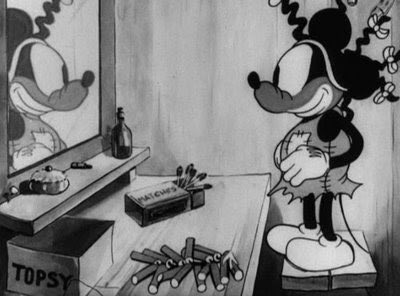 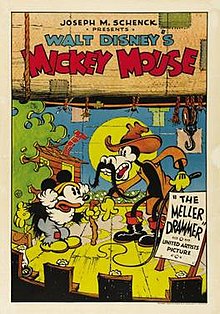 Mickey's Mellerdrammer is a 1933 American animated short film produced by Walt Disney Productions and released by United Artists. The title is a corruption of "melodrama", thought to harken back to the earliest minstrel shows, as a film short based on Harriet Beecher Stowe's 1852 anti-slavery novel Uncle Tom's Cabin and stars Mickey Mouse and his friends who stage their own production of the novel. It was the 54th Mickey Mouse short film, and the fourth of that year. The cartoon shows Mickey ...

To be brutally honest, Splash Mountain isn’t based on Song of the South, it’s based on one catchy song, and a couple of obscure clips from Song of the South, a movie that almost no one has seen, and those unlucky enough to see it today, on the black market, universally agree that, aside from that one catchy song, it’s a terrible, horrible, not so good movie in the first place.

Don’t forget one of the main driving reasons to use that theme: a strong desire within the company to find an IP that would let them re-purpose all the animatronics from the America Sings attraction (and save a ton of $$ on the theming in the process) 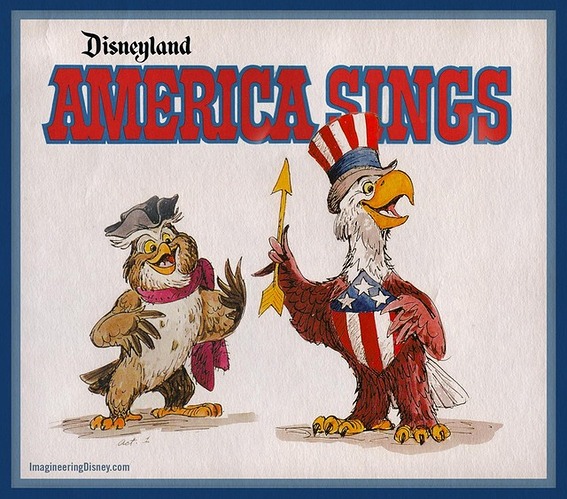 [ UPDATED 7-6 with new images and info ] A look back at the Marc Davis / Al Bertino patriotic ...

That said, the ride more closely follows some of the scenes from that movie than some other Disney rides follow their original IP. Mr Toad’s Wild Ride strays much further from the source material, for example. So it’s probably not accurate to say it isn’t “based” on SotS.

I can recall as a kid seeing cartoon footage and countless references to “Songs of the South” in other Disney materials and promotions, yet the movie itself was elusive. I did however eventually see a bootleg version later in life and can agree that it would be warped to treat it as just another family movie.

I do wish they would rehabilitate the Adventures of Br’er Rabbit and company. They are based on an amalgamation of African and Native American folklore. They could revisit source material, pre Uncle Remus. Get African, African-American, and Native American writers familiar with the folklore to update the stories slightly. More trickster rabbit, remove the racism.

It is some of the earliest American Folklore that should be preserved and returned to the voices it originally came from.

You write that as if that’s not the single easiest thing for them to do.

Most kids on the ride have no idea who the animatronic characters are or what movie they’re from. That’s a very good thing.

Most people have no idea that the ride is named what it is because Michael Eisner wanted to publicise the completely unrelated Tom Hanks/Daryl Hannah movie that was released about the same time the ride was announced. That’s a good thing in another way.

Hoooooooo-BOY! As a native Floridian lemme tell yuh, repugnicans are furious about this. The common theme is the usual theme they complain about - white culture erasure.

They ask the question, loudly and proudly, “Why can’t WE celebrate white pride?!? They’re erasing us by changing this (hokey pokey karaoke) ride at Disney (a company they hate for their “woke” politics in spite of the fact that Disney has consistently been one of the largest donors to the Florida GOP)!”

And they never, ever stop to think… oh, wait? White culture is predominantly founded on enslavement of others and oppression? I’m a white guy who owns a business and when I tell you this is a common theme amongst my customers, who speak openly to me as if I should, by my whiteness, agree with them, they’re surprised every time. And their complaints are always always ALWAYS followed up with vaguely racist and threatening comment. They then look very pleased with themselves, as though an intellectual argument had been won.

It’s infuriating. It’s comical. It’s insulting and hypocritical…. and my crappy state is only getting crappier. I’m gonna close my family business after 31 years so I can gtfo of this horrible place. The self-righteous theme of Do As I Say, Not As I Do is the law of the land here. So, so many of my neighbors and family are racists who get infuriated at the very notion that they might be a racist.

It’s almost as if they realize racism is an ugly, harmful thing, and don’t want to be associated with it. Hmmm…

This might be more difficult than you think - the Uncle Remus stories were all filtered through the pen of Joel Chandler Harris, a white 19th century Southerner. The whole thing is pretty problematic. Best for Disney to not touch it.

ETA: A closer reading of your post obviates part of my comment - but I still think it would be difficult for Disney to pull off.

I like the idea of getting black writers to strip away the white clag, and get back to the underlying tales. Image, “Jordan Peel’s “Br’er Rabbit””.

Speaking of Mr. Toad, you might enjoy this. She has so many great YouTubes. Did Kenneth Grahame get the idea for Wind in the Willows from a drunk guy in the pub? - YouTube

the Uncle Remus stories were all filtered through the pen of Joel Chandler Harris, a white 19th century Southerner.

You’re right. But these stores of American Folklore shouldn’t be tossed in the bin because the most popular rendition is through a white lens.

Like I said, revise it with story tellers that are culturally linked to the stories.

You’re right, Disney may not be the best vehicle. Though they have enough money to do it right if there was will.

Another option would be re-telling the stories through a different group. It won’t be the Disney version of the stories or the look, but something else. The source material, including the Uncle Remus stories they were based on, are public domain.

It’s not just the old stuff. The Lion Guard was released in 2015 and is pro ethnic cleansing. Disney isn’t all bad but you need to treat anything from that company as potentially PG.

To be brutally honest, Splash Mountain isn’t based on Song of the South, it’s based on one catchy song

Granted they changed the tar baby into a honeypot but it’s still got an awful lot of quotes and story elements from the film. 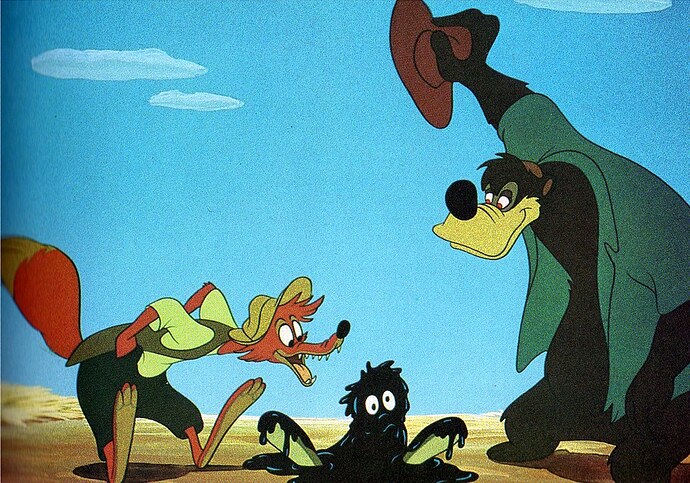 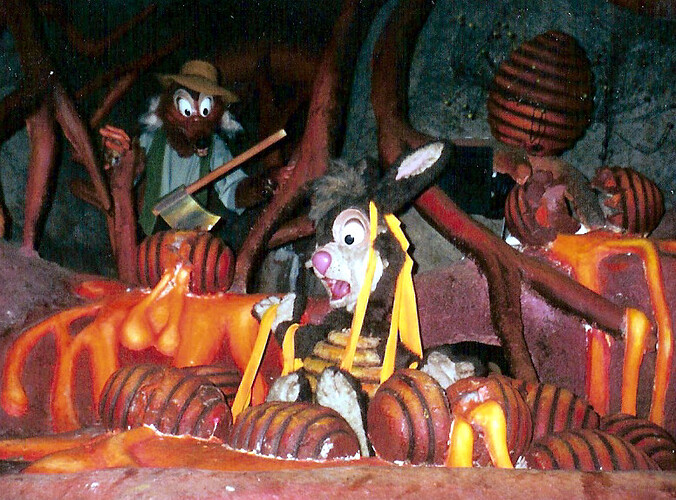 With some Disney fans I just went with: No kids have any connection to that movie and Disney tries to mix things up with newer properties where they can. On top of all that have you SEEN song of the south? I have and past a few good songs and some technical marvels of the time it is really fucking awful. The kids are just horrible actors and the film is slow as fuck. Every time it goes live action the film just dies. Really they just need to get rid of the cultural yikes from a shit film and move on with something kids actually possibly might actually care about.

I had back in the day got the Japanese laser disc of the film because I was being an animation completest and sat down to watch it. Really it is just a really bad film from a film-making stand point and cultural standpoint. The animation is top notch and it’s got catchy songs and that’s about it.

it’s still got an awful lot of quotes and story elements from the film.

Personally this single quote posted in the queue may be the most offensive part of the ride to me. 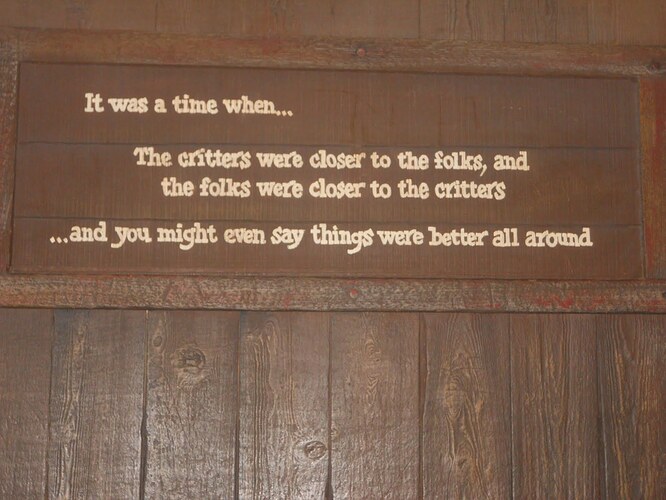 If uncle Remus was the one saying this while living on a plantation in the reconstruction era, he could only have been talking about a time when he or his family were enslaved, so there’s no way that things could have been “better all around.”

I do wish they would rehabilitate the Adventures of Br’er Rabbit and company.

As long as they are still considered to be due to Joel Chandler Harris, rather than understood in their original context as African stories, then that’s not going to happen.

The problem, of course, is that it’s not that easy. You can’t just wipe away how that stuff was appropriated. That’s a major part of our problem as a nation, lately, the drive to just erase the “bad” stuff that makes white men sad instead of understanding and acknowledging, and moving forward from that place of understanding.

It is some of the earliest American Folklore that should be preserved and returned to the voices it originally came from.

The racist Disney version is not that, though.

It’s almost as if they realize racism is an ugly, harmful thing, and don’t want to be associated with it. Hmmm…

They want it both ways.

But these stores of American Folklore shouldn’t be tossed in the bin because the most popular rendition is through a white lens.

No one is saying that. People are saying that if you just assume that they are American, and it belongs to all of us, without acknowledging the racist history of how they were appropriated, you only end up with covering up racism.