I’m pretty sure all the commenters here are careful to read it right the first time.

heh. thank you for assuming the best of me. but you’re wrong

This is limited to Google Search Appliance only from what I can tell.

Perhaps not entirely surprising; I guess they don’t want malicious and/or SEO-optimized pages to show the user things the googlebot skips. Slightly less of an issue when trawling an intranet.

I had actually read this in the early hours of signing up but did not remember.

I’m glad Jeff mentioned this discussion in another topic because I’d like to… uh, 8th? the suggestion.

@beschizza how do we go about making progress here, is this on the cards? Do you need anything from us?

At the bare minimum I am going to add a setting to the WordPress plugin for mirroring of posts and play around with the indexing to make sure you don’t lose pagerank on the main site.

Now that it’s been running for a while, the consensus is that BBS should have neither truncated excerpts nor full content. Truncation is frustrating to read, while duplication in full makes the site and the forums feel weakly integrated with one another.

The thought is that reading and commenting should be as simple and flowing as possible: read the post on the site, then land right into the discussion without unnecessary duplication.

At the Boing Boing end, we have a UX problem in that the link to the forum thread is buried under a lot of stuff after the post. Like so: 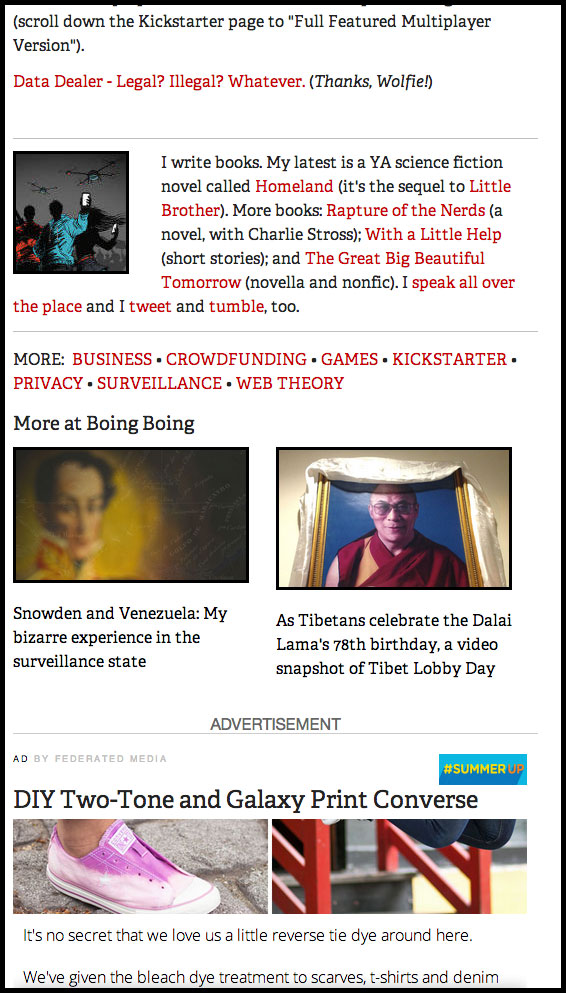 You wouldn’t even know there was a thread to go to. Instead, we’re going to make it look like this: 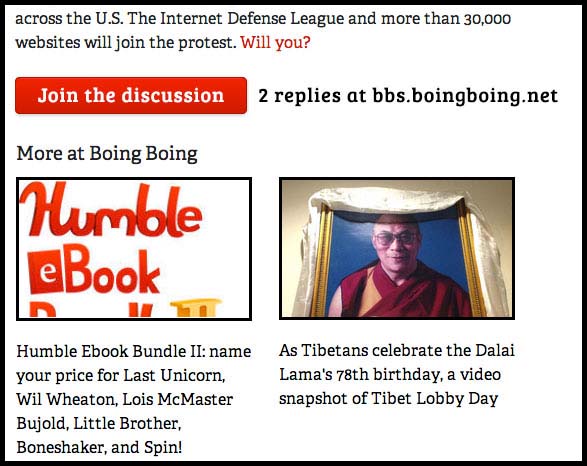 An immediate call to action. Few (if any) forum comments republished at the blog itself. This makes for a more natural and less confusing jump from one environment to the other. Less duplication all-round, less of a feeling that the forums are a “second class” version of the original post.

This leaves a new challenge here, though, jn that threads here would then be ‘headless’, except for the headline itself and a link to the original post, until at least one person has commented. My first thought is that if no-one’s commented, there should just be a comment box. But that seems at odds with the Discourse comment popup concept.

The thought is that reading and commenting should be as simple and flowing as possible: read the post on the site, then land right into the discussion without unnecessary duplication.

Blech. Worst of both worlds. So now I have to go back to looking at the site again? Can I claim for a new mouse for twice the clicking required when visiting BB now?

They’re two different things, and now that they both exist, the best approach is to embrace what each one does best. Articles at Boing Boing, discussion at the forum.

Consider how the “ecology” of web-postings usually works, from traditional forums, to reddit, to social networks, to blogging at large news sites – anywhere where the talk exists on a different URL to the thing being talked about. What generally works?

Reposting the full thing sometimes happens, but tends to make for a relatively unappealing OP. This goes double when the thing being reposted has typesetting or layout characteristics that are lost in the copy-and-paste action.

What usually happens is this: the thread starter will recap in their own words, select meaningful excerpts to illustrate or respond directly to, or just get down to the business of discussion. So whatever encourages that would seem the right approach.

This leaves a new challenge here, though, jn that threads here would then be ‘headless’, except for the headline itself and a link to the original post

It’s no more “headless” than, say, a Hacker News link to an article… 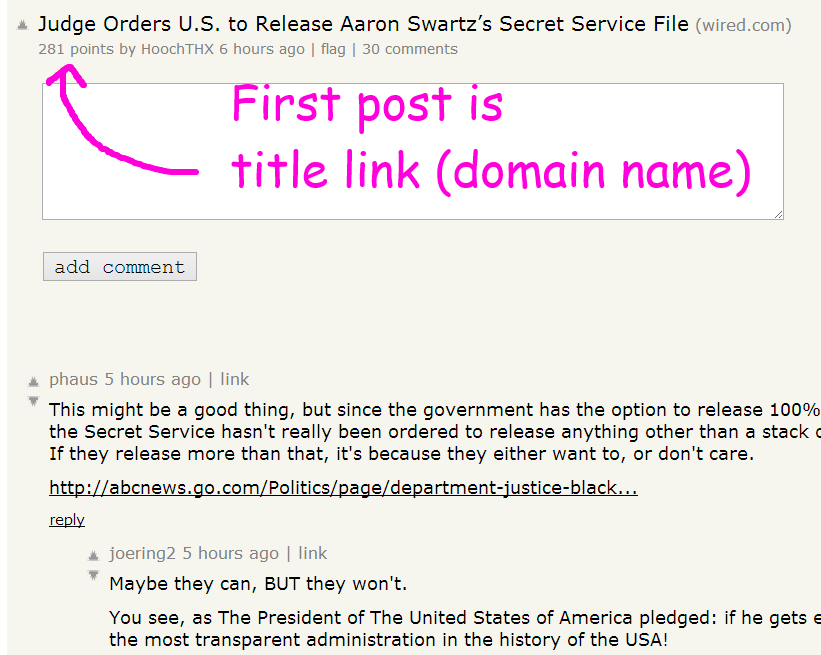 Both of which are all about discussion of the article in the “first post”.

I think you’re right! Just having the headline and that interesting metadata box is probably just the ticket.

What about – and this is just blue sky daydreaming – a system like the NYT uses:

A drone base established in February to track militants in Mali is the latest indication of the priority Africa has become for the United States, but the strategy has limitations.

If you scroll down at the bottom of the article you’ll see: 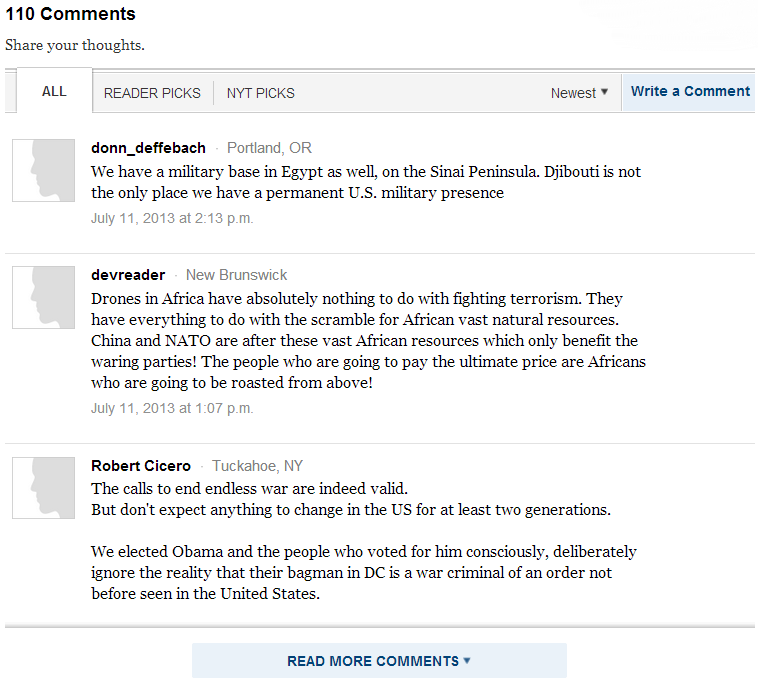 I guess the idea is that by default you only see editor selected comments but with a single click you could switch to community best, or even all.

Of course by the time you’ve clicked the mouse to switch your view, I guess you could have clicked over to the BBS itself… just thinking out loud here.

That sounds like a good compromise/solution to a couple of the issues raised. Most importantly, by doing that instead of just clicking over to the BBS, it allows the full text of the article to be seen by both comment readers and comment authors without needing to have two tabs per article.

Per @beschizza and @pesco the current format for the first post is now:

Where the Permalink text, obviously, links back to the article.

And about a year ago we added the Show Full Post button at the bottom of the first post, which addresses most of this.

This is very welcome, but it seems like many times it just expands to a “subscribe to the newsletter” blurb.

Wow, somehow I’ve never noticed this, and have just grumbled as I’ve opened the site up in a new tab in order to grab a quote from the original article.

Not sure if I’m just slow, or if it’s (somehow) a bit too subtle. Seems obvious now that I see it, but…

Maybe if it were shaded slightly before the mouseover?

This topic was automatically closed after 1327 days. New replies are no longer allowed.