He’s not a dog either. That’s just a cartoon!

hang on… so… what does plutocracy mean? 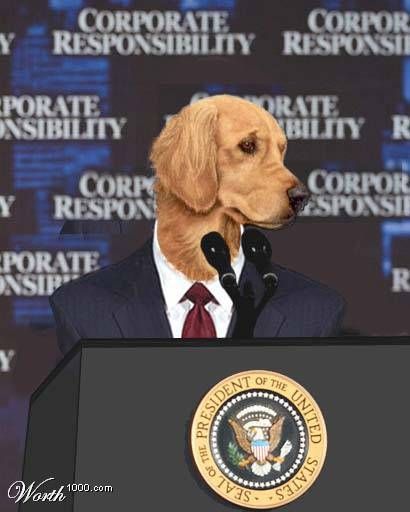 I wonder how many of them have ever even had a conversation with a Muslim?

But some of their best friends are Muslim. The good kind.

Remember when the magnitude of our national surveillance state was breaking news and one of the many very good arguments against that level of institutionalized surveillance was, you guys may be the heroes you’re claiming to be, but what about the next guy? Ladies and gentlemen, I give you Mr. Donald J. Trump. #pleaseclap

Well, I kind of did. In the debate, he was the only one who sounded at all reasonable/like a leader, and New Hampshirites seem like reasonable people. Plus Rubio panicked.

But some of their best friends are Muslim. The good kind.

Recently had a conversation at work where someone tried selling that argument to me and two muslims.

Apparently Chris Christie is pulling out.

Some are so fed up they’re following an authoritarian bigot

I guess the difference between Trump and his competition is that he says in public what they think and do in private (plus additional crazy stuff aimed at the white working class Republican voters).
But I do wonder how many voters support Trump because they suspect, based on his record, that he’s saying things to get votes that he would forget about five seconds after taking the oath. After all, one of his closest business partners is a Saudi Muslim, and the Saudis haven’t said a word against him.

I’m curious if the voting format helped Trump. In a private ballot, he soared. In a public caucus where his supporters had to show their face, he didn’t do so well. I don’t think that’s a coincidence.

I wish I could get all the Republicans (still in the race) to agree to speak about “we need to defeat Sanders in November” and freeze her out of their comments completely.

It just might drive Marie Madame Lafarge Antoinette Clinton completely over the edge.

The Spanish-language press calls Rubio “un joven viejo”, which translates best as “old fogey”. That’s about on the mark.

I think that the republican candidates secretly want Hillary to win the primaries, although they’ll never admit it in public. She is the least worst failure option. The idea of a socialist President Bernie Sanders is a nightmare for them, so they’ll keep ignoring him in the hope that Democrat voters think that only Hillary has a chance.

he actually pays his interns 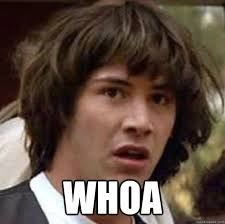 Marie Antoinette I can agree with, however, I highly doubt that H. Clinton would be so stealthy with her shit list, even if she does know how to knit.

I’ll say this, I probably disagree with the majority of Kasich’s policies, but I think he seems like a decent human being.

Aside from being a misogynist who enjoys the torment of women.

I think that there is a very interesting phenomenon occurring which is that you might have a fairly significant proportion of white male voters that would just as easily vote for Bernie as they would for Trump.

I bolded that only because of this snippet from fivethirtyeight.com’s writeup about the NH results. Sanders has done fantastically well, but his row to hoe beyond NH is not going to be easy ground: 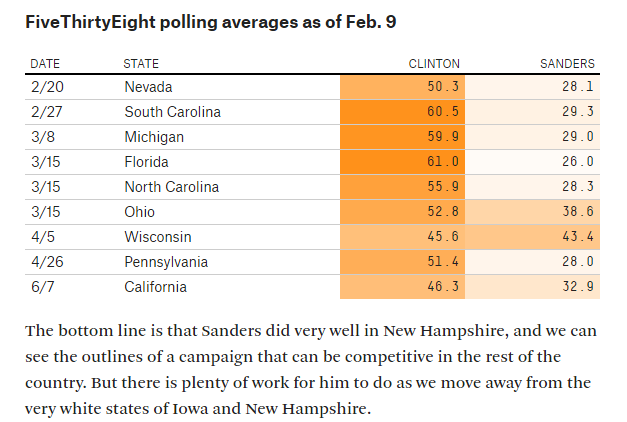 The theme of the night at Clinton’s New Hampshire primary party was best summed up by the Taylor Swift song that plays on loop at every event: shake it off. The mood was neither somber or defeatist. Instead the crowd was raucous and spirited. Clinton delivered her shouting over loud bursts of applause and chanting.

With an eye on the upcoming primaries in South Carolina and Nevada, Clinton emphasized ending bigotry and discrimination. Her campaign announced she will be joined on the trail by African American parents who have lost children to gun violence.

What Clinton said to Goldman Sachs