Douglas County, OR using dirty ballot tricks to finish off the slow murder of its libraries

We all know why this is happening: these commissioners or whatever are clearly psychotic.

Southern Oregon is a beautiful place full of the dregs of redneck mouth breather society. They don’t really have any need for libraries. They would vote unanimously for a gun library though.

Pretty sure this was one of Boss Hogg’s schemes on the Dukes of Hazard.

While I think this scheme is indeed underhanded and the library should not be cut, the county probably is in financial straits. A lot of Oregon counties used to get federal timber money to not cut down trees but that money is drying up or has been cut off. These counties often have trouble paying for police and fire services, much less libraries. They will continue to bleed residents who move to Portland or elsewhere to find jobs because remaining won’t be sustainable.

Libraries have been deliberately or accidentally destroyed or badly damaged. Sometimes a library is purposely destroyed as a form of cultural cleansing. There are examples of accidentally destroyed libraries by human actions. Other times they are damaged by natural disasters like earthquakes, floods or accidental fires. Library fires have happened sporadically through the centuries: notable examples are the destruction of the Library of Alexandria, destruction of Library of Nalanda in India and t...

I’m all for libraries (full disclosure, I’m on the library board of my Ohio country library system)…

That said, what kind of insanity is running the ballot initiative if the main way to get information out to the voters is the group that has OPENLY said they are against it?! Sounds like a pretty pathetic voter outreach to me (and yes, I’ve been involved with two levy ballots during my tenure, so I speak from experience)

I’m not buying this one. In Oregon, we vote by mail. A couple of weeks prior to the election, voters pamphlets are sent out to registered voters, with all of the candidates and ballot measures listed. There is an opportunity for all supporters/opponents of candidates and ballot measures to buy space (I think the candidates themselves get a freebie) to advocate for or against. So the voters will have that to consider.

As for all mention of the measure being scrubbed from the county website, that’s not true. It’s on there in the elections section, along with the other county measures.

It would be tragic if these people lost their libraries, and hopefully they have the good sense to override their idiot commissioners, but it doesn’t look like a nefarious cover-up to me.

Edit: I see near the bottom of the form that the county is not including an explanatory statement, which is required if the measure is referred by the county. So maybe they don’t do the pamphlet. I wrongly assumed it was standard. I’m a bit shocked that it’s not.

Anything to avoid socialism, I guess.

You have to move to Portland for that.

Nah, Portland is really just the wealthy’s playground. A cesspool of late stage capitalism, massive populations of houseless, insipid gentrification, and privileged white people (of which I am one of)… basically like SF but with less native wealthy people and more rain.

They would vote unanimously for a gun library though.

“It is a thing! They totally have gun libraries in America! Oh, hang on, it may just be a shop with a funny name…”

“Ah, it is a shop with a funny name. Of course it is. Heh. I didn’t actually think they were gun libraries. Not really…”

But I did for a few seconds. Oho, you guys and your guns. Oh how I laughed.

A lot of Oregon counties used to get federal timber money to not cut down trees but that money is drying up or has been cut off.

That is true. The other part of that equation is that a lot of anti-tax libertarians and conservatives moved into Oregon in the last 50 years or so, for the exact reason that Federal timber money paid for almost everything, and taxes were extremely low.

Now that the Federal money is pretty much gone, the residents literally don’t want to pay for any public service. Josephine county, Oregon, routinely votes against public safety. 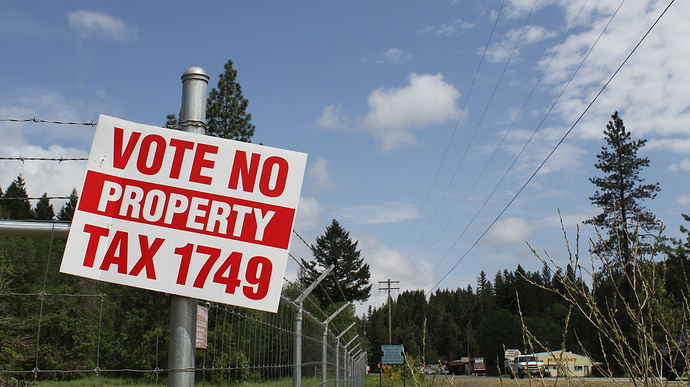 Two Oregon counties have reportedly rejected property tax increases that would have funded law enforcement and public safety services. The counties once received federal timber subsidies, but those days are over — and now they're scrambling to pay...

Oregon Was Founded As a Racist Utopia

When Oregon was granted statehood in 1859, it was the only state in the Union admitted with a constitution that forbade black people from living, working, or owning property there. It was illegal for black people even to move to the state until 1926....

I meant that from the 1960’s on, Oregon – especially southern Oregon – has been a destination for people who don’t want to pay taxes, specifically because the taxes are low and the O&C funds paid for almost every public service.

But yes, it’s unfortunately been a destination for racists for a lot longer than 50 years. That doesn’t really relate to my point, though.