DRM: You have the right to know what you're buying!

Consumers have rights? That’s so retro. Bet you voted Nader too, right?

(Note to Cory --> In the penultimate paragraph of the separate letter:

Today, we published a letter [https://www.eff.org/deeplinks/2016/01/you-have-right-knowwhat-youre-buying-online] signed by publishers, rightsholders,

the link is malformed and leads only to the deeplinks 404-ish page.)

Perhaps the EFF could make a DRM-contents version of the many Nutrition Facts labels used 'round the world. Call it something like Ownership Facts and list some ingredients analysis: Ownership status (you own the product, you own a license, you lease a license, etc.); Repair Status (you are/are-not allowed to modify the product, must use officially sanctioned repair facilities, etc.); Network Dependency (requires internet or no, performance penalties for not connecting, etc.); Network Security (maybe some 1-5 scales of data privacy and communication security); Dispute Resolution (free to use the courts, or limited to arbitration, or offshored to some distant land making lawsuit impractical, etc.); and the like…

…because it’s hard to catch the eye (and then the mind) of the casual surfer with nothing but another EFF wall of text.

I would further add that if the DRM infringes on the Doctrine of First Sale (or Patent Exhaustion) , the provider of the good shall be liable as if they wrote a bad check (a Class A felony) and be subjected to fines and “treble damages” up to the value of the good they sold.

If a company doesn’t label the deliberately disabled features of their product to temper a reasonable buyer’s expectations, they should be liable for fraud.

Silly example: I buy a new computer expecting to be able to use any source of Wi-Fi. 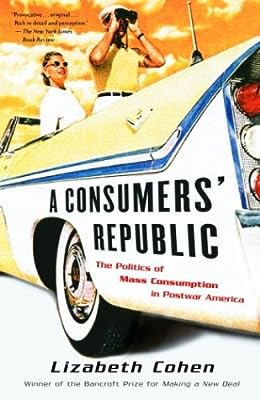 A Consumers' Republic: The Politics of Mass Consumption in Postwar America

In this signal work of history, Bancroft Prize winner and Pulitzer Prize finalist Lizabeth Cohen shows how the pursuit of prosperity after World War II fueled our pervasive consumer mentality and tran ...

When I buy an e-book, I first buy from a site that advertises the book as being DRM-free. If I can’t find that and still want the book, I buy from a site which has DRM that I can break. I don’t buy from sites like Apple that won’t let me remove the DRM.

Actually, it’s not that the link is malformed, it’s that the EFF seems to have removed or moved the letter. The same link is in an email I got due to my story being quoted in said letter. Putting “cache:” before the URL pulls it up from the Google cache.

Back when I posted, the “separate letter” link still worked, yielding the letter as a pdf. The link quoted from that letter was, on my phone at least, malformed, adding a trailing “]” to the url. Didn’t throw a 404 per se; a deeplinks page opened saying, in effect, “Huh?”