Not too bad, i’ve seen one other e-ink watch before i think. The one point of contention here is the battery, i think it’s a wasted opportunity not to have a rechargable battery of sorts.

here here.
a watch battery that only lasts 60 days?
that’s a deal-breaker.

i had a timex that went about 10 years.
the battery outlasted the LCD.

The mechanical dial watch in Interstellar ran for something like 25 years!

I always thought e-ink would use more power than the traditional LCD on a cheap standard watch, but i didn’t realise it was power-hungry to that extent.

60-days is still remarkably poor compared to a standard watch and you don’t get any smartwatch tech, looks pretty but it seems you get many negative points of a smartwatch without the good stuff

Maybe this kind of tech could be used in the watch strap in the future though: 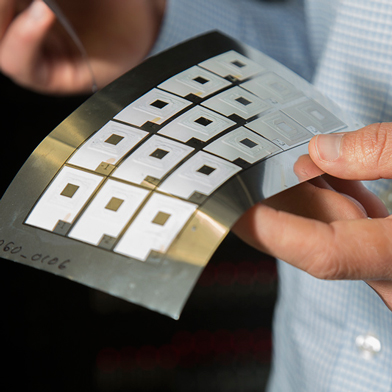 Imprint Energy is developing a long-lasting, bendable, and rechargeable battery.

E-ink has the advantage of using literally zero power when not being refreshed(over some suitably long timeframe the little electrophoretic elements probably diffuse back to grey; but ‘suitably long’ is long enough to be nearly irrelevant); but transitions are comparatively expensive and the drive voltage required is relatively high(not high as in literally shocking; but some little DC-DC converter has to provide 15 volts or more to nudge a pixel or segment, and that kind of step-up isn’t free).

Changing an LCD’s polarization state requires constant energy input; but not a whole lot of it(especially for simple displays using just a few segments, rather than a proper bitmapped display that needs a relatively large framebuffer, comparatively fast input interface, etc.) As long as you stay away from the backlight LCDs are pretty undemanding.

(edit: Editorial Time! I have to put myself in the “Doesn’t get it” camp on this design. The aesthetic is somewhat interesting, in a “Hey, a game set in a stark, two-tone simplified environment would look pretty cool; like a more Bauhaus version of that one game that mysteriously managed to get released for Wii despite being seriously gory”. However, the ‘minimalist’ is cranked high enough that the face effects appear quite close to being duplicable by a few layers of printed and die cut plastic with one or more driven by a basic quartz/mechanical movement of absolutely no distinction.

I’m just sort of confused by something that lands in the area between the Pebble’s ‘charge every 7 days but actually do some vaguely “smart” things’ and basically any cheapie’s years-long battery life and, once you get out of the really nasty end of the market, near indestructibility.

Maybe when we have ubiquitous nanopatterning and adding complex programmable elements to everything from bulk structural materials to disposable packaging is something we do for effectively no additional cost or durability risk this sort of thing will be routine; but for the moment it looks like a lot of comparatively delicate and power hungry electronics doing the job of some dirt-stupid and durable passive materials.)

a watch battery that only lasts 60 days?that’s a deal-breaker.

If users are given the ability to write watchfaces/bands I can guarantee the elegant minimalism will be out the door in 5 minutes.