Inkcase is an e-ink display for your iPhone

I don’t really buy that there is a battery-life angle here, because the kind of things e-ink is good for—notifications and reading plain text—don’t drain much battery life in the first place.

I think I may be misunderstanding what you’re saying here. If you’re able to receive your notifications without turning on the iphone’s display, you should be able to save your battery charge throughout the day, both extending the number of hours you can use your phone and minimizing the number of charging cycles over the battery’s life.

It’s the same concept of a smartwatch extending your battery life because you’re not constantly turning on your phone’s display to check on any new notification–you just look at the notification and decide whether or not to turn on the phone.

Why wouldn’t this conserve battery charge as they claim?

Because now you need to have bluetooth on constantly so that the e-ink display can be updated.

The only way to truly settle this question is to test it. This case would still cause extra battery strain from a constant Bluetooth connection, running whatever processor refreshes the screen, and keeping the screen up (some “eink” screens still require power, such as the Pebble smartwatch). If this power is less than periodically checking your screen, then I can’t imagine it’s by much.

Because now you need to have bluetooth on constantly so that the e-ink display can be updated.

Use low-power bluetooth protocol, from the 4.0 spec, and Robert is your relative.

…I for one would prefer wearable display goggles.

Edit: …and we need a wide choice of cheap e-ink display modules for DIY mods…

Wanting a minimal interface or an easy on the eyes display -sometimes- is the point here–switching to a dedicated phone isn’t an option for many who would like the benefits occasionally but still need a fully functional smartphone.

I do wonder why they are touting e-ink, but only showing an inverted (white text/black background) display, which is typically not what people (at least when reading long works) want. Does this thing even allow for black text on a tinted-background like a typical Kindle display? Can’t tell from the desperately-in-need-of-a-proofreader descriptions on the linked web site.

Ah… http://oaxis.com/ shows a non-inverted display on the “Android version” (which seems to be a flip-open case, not front-to-back like on the iphone one). Though there’s nothing but a picture on that site as far as I can see.

Those are the same guys that started inkcase plus on Kickstarter.
With abysmal results.
The promised software features never materialized and the discussion forum is full of disappointed backers. 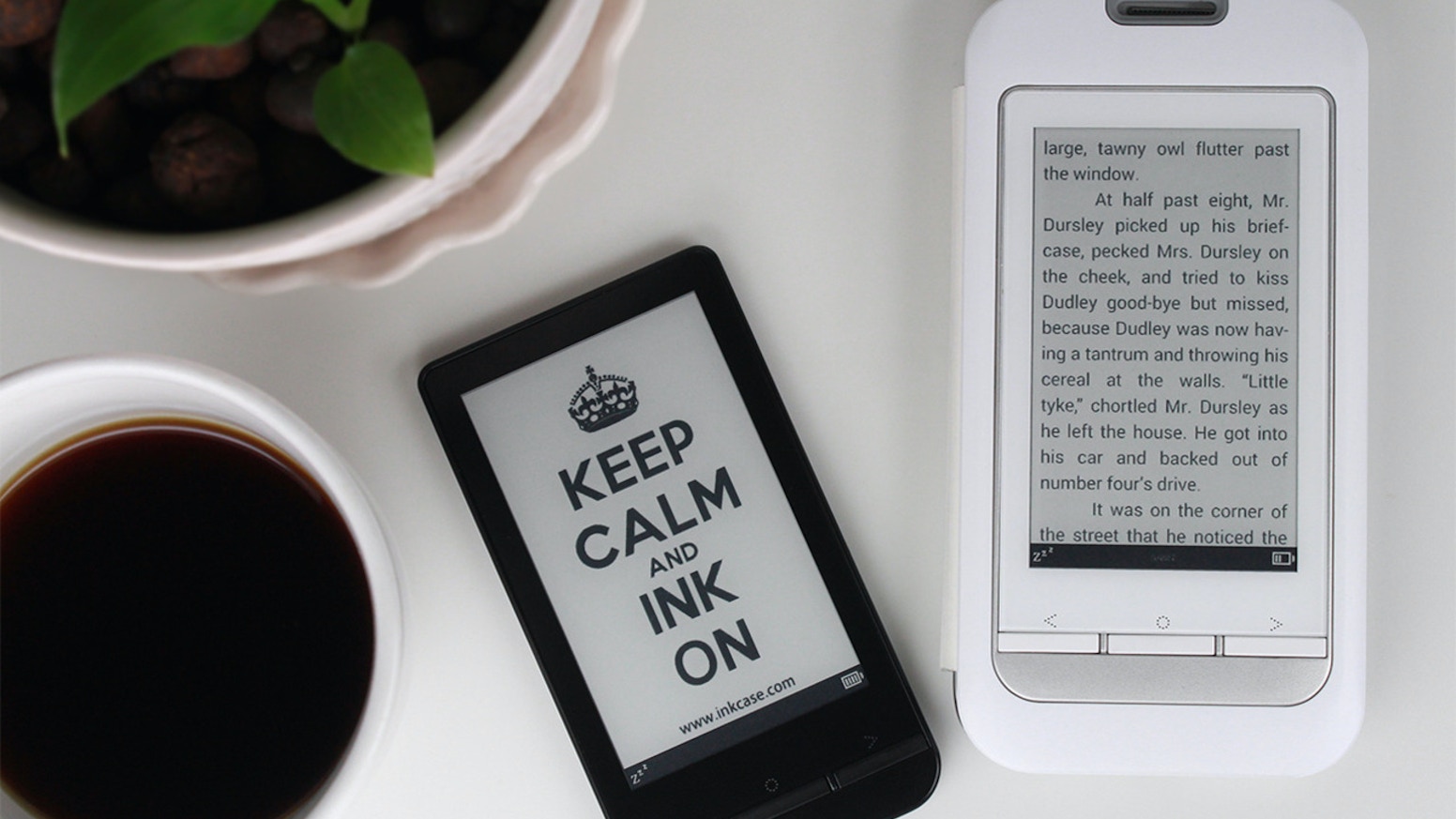 It should be a lot simpler to implement this for Android, since most modern Android phones have industry-standard USB OTG, so the e-ink display could be implemented as a straightforward USB peripheral, communicating and drawing power straight from the phone’s USB port. The fact that this peripheral that’s always mere millimeters from the iPhone nevertheless has to use wireless communication, contain its own battery, and have its own separate (USB) charging port, illustrates why I find Apple’s closed hardware and software approach so obnoxious.

The Jolla cellphone is said to have replaceable back covers that have a connector for communication with the phone’s electronics. If it is so, making an e-ink back cover should be even easier.

Thought. E-ink displays need just a bit of energy. Many phones have NFC coils in their backs. Could such display be powered and operated via NFC? At least a small e-ink display could work that way…

Actually, it’d likely be easier to implement for the iPhone because you have a much smaller set of sizes and connector locations to work with. It looks like they their Android version (which apparently was also plagued with problems) had 2 parts - the actual eink device, and a “FitCase” that could fit a range of phones.

At that stage I’d almost think you’d be better off just selling a 3.5" eInk screen that connected to your phone via Bluetooth that could be used with or without a case.

I would love an eink phone,

especially one designed to work with wearables like a smartwatch.

I wonder then why they didn’t use the Lightning connector instead of Bluetooth, a separate battery, and a separate USB charging port?

And they could then charge the phone through the Lightning link, when connected to the charger.