Eddie Huang - The Fresh Off The Boat Mutant

Not sure how the TV show will turn out, but this was a great longread profile for a Sunday morning. 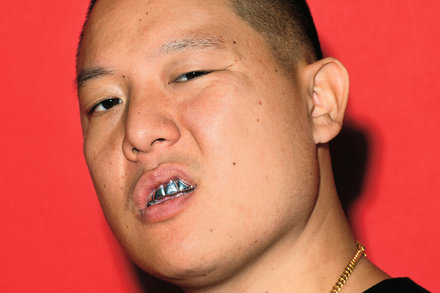 Eddie Huang Against the World

The performer, chef, writer and provocateur tries to take his brand of Asian-American anarchism to the mainstream.

I actually saw the tail-end of the pilot while channel-surfing the other day. I wanted to see the whole thing based on the ads, but I got caught up on something else and just saw the resolution/denoument rather than all the jokes and action, unfortunately. still, I’d definitely watch it again.

in an effort to remember the time-slot, I’ll type it out here for all of us:
Tuesdays at 8/7central ABC

The few asian dudes that I’m tight with are super cool–not because they’re my friends, they are objectively-speaking very cool guys–so they’ve made me familiar with how they don’t exactly fit into the asian community sometimes, but also how being a small minority in the US is an extreme outsider status in-and-of itself. so, because of them I think this show could be interesting to me. I couldn’t really tell by the little bit that I saw, but it did seem a cut above your normal broadcast sitcom, so i reckon i’m on-board for now.

The NYT link mentions David Choe briefly, and I really loved the show he did called Thumbs Up, it was on Netflix. pretty sure it was a Vice production. I first encountered him in that mag probably a decade ago, he wrote/took photos for a thing for them about the grifting tools he carried: a powerful magnet that I think disabled shoplifting sensors or something, a “superdollar,” you run thru the laundromat change machine then pull back out until you’ve drained all the quarters, etc.

that was dope, thanks. The asteroids are comin’, man…

He really reminds me of my friend Dave.

I think it’s getting better?

the parents are the show, IMO

this Repeat After Me show that’s on after it is actually making me laugh pretty hard. It’s the woman from Reno 911.

I think it’s getting better?

I’ve no TV so I can’t opine. But I do hope it’s got staying power, as I like everything I’ve read about Mr. Huang.

This topic was automatically closed after 741 days. New replies are no longer allowed.