The truth will set you free!

Unless you report truth that those in power don’t want exposed.

I think it’s possible that Sisi might have gone over the edge. He’s fully exploiting ISIS’s bombings to crack down on any number of political opponents… but hey, the liberals in Egypt supported his coup against the Muslim Brotherhood, too. Now they’re getting a taste of what MB has been seeing for decades.

I hate that such a promising uprising has turned into such a shit show. the current state of the middle east is a mess and a tragedy of epic proportions.

I hate that such a promising uprising has turned into such a shit show.

The best way to show the world that your country is fascist (or close to it) is to jail journalists who tell the truth.

Why do we always have to add that Amal Clooney is the wife of George? She’s an internationally renowned human rights lawyer. She happened to marry an actor. Her marriage to said actor is completely irrelevant to this story, it just continues the standard reporting trope that women are defined by the men in their lives, instead of, you know, the things that they do.

It does make one want to wander outside shouting, “The hell!? The hell!! WTF? Really!?”

Why do we always have to add that Amal Clooney is the wife of George?

Because she has his (famous and not very Arabic-sounding) surname and has only been married for a year? The NYT, BBC, Guardian, Sydney Morning Herald and most other main sites doesn’t mention it, in any case. On the other hand, AP did mention the relationship in a tweet, which wasn’t as bad as this headline: 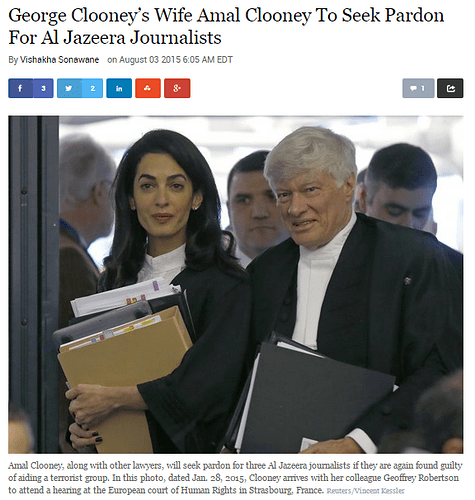 If anything, there’s much more attention on whether she is sufficiently stylish. I wonder how the world would be if we cared a little less about stars from the world of entertainment?