So an e-Cig that looks like a Men in Black neuraliser?

And they say e-Cigs are safe…

I want to live in a world where police statements are more credible than some guy on the internet.

Add it to the list of things that are perfectly safe so long as you refrain from being black.

So an e-Cig that looks like a Men in Black neuraliser?

Available on the BB Store for a low-low price.

Might not be the same model, but the heavy irony was too much to resist.

Chill dude. We were all newbies once.

Most of us didn’t setup our starter profile to look like a “brand embassador”.

Just don’t point them at a cop, okay?

That’s a lot of LOLs up there.

Edit - just to explain this, new poster Carmelle has been disappeared, and she sure used a lot of LOLs.

“They shouldn’t have called police — they should have called crisis communications,” the woman is heard saying on the video as she sits on a curb, her head in her hands.

“They just killed him,” she said, weeping.

Clearly the Police Departments need to evolve into two clearly named groups: the “Public Servants,” and the “Death Squads.” Just so there won’t be any surprises.

People are still surprised about the Death Squad bit?

The investigation just started, but based on the video voluntarily provided by a witness, the subject did NOT have his hands up in the air

Well, I guess “the subject” had it coming, then.

Also, calling the human being you’ve killed “the subject” sure must make it easier on your conscience.

As a long time San Diego resident I say that El Cajon [the box] is the Missippi of the suburbs here.

That’s pretty harsh. The suicide by cop bit seems so out of place (since it doesn’t logically follow from the first statement) that it’s jarring.
But it’s your opinion, I’ll just smile and nod politely.

What a load of crap. A cop committing murder. I refuse to get used to the this. We must take their money, their authority, their weapons, and their uniforms. We must end the police as we know it today. I support the complete abolition of the current system for completely new system based on upholding the law and providing actual security with minimal force.

Live a life free of law enforcement and if you get stopped just do what they tell you to do.

Sounds just ducky. I mean, what’s up with these people who do things that causes them to interact with the police? People really need to just stop being so … black. I don’t care if the same cop stops and frisks you every day, you need to just shut up and do what they want. Amiright? Just because you don’t like being pushed down on the hood of a squad car, pepper sprayed while in handcuffs in the back of the squad car, or having your little cousin shot for playing with a toy gun in the local park there is no reason to be upset. Just do what the person with the badge and gun says no matter what. Bow to your master, scrape your knees, and know your place… which is definitely below our vaunted and beloved police

Otherwise some people are suicidal and unfortunately prefer suicide-by-cop.

And some cops are homicidal and prefer homicide-by-cop.

And then after all that, they’ll shoot you anyway for absolutely no reason, whether you do what they say or not. Carmelle is totally right, it’s win-win! Except both wins are the cop’s. 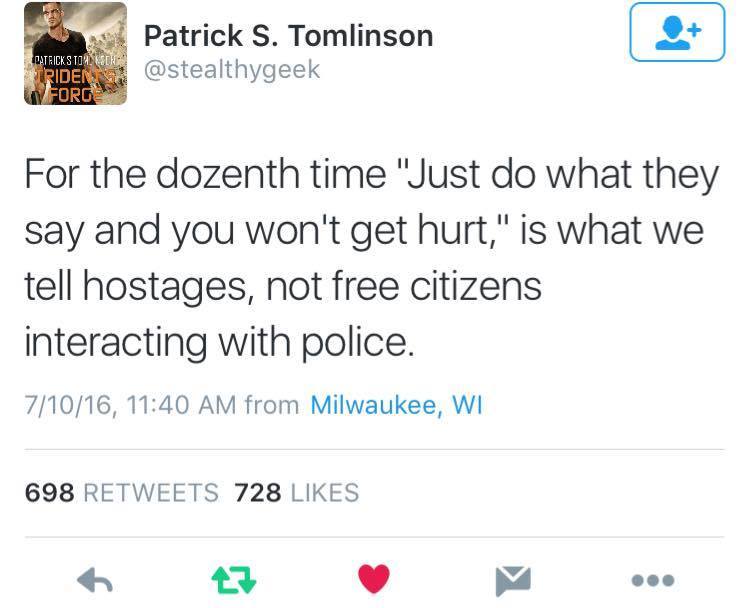