Excess female awesomeness. I’m so tired of being humiliated by it. Thank you Zuck.

For those of us who never liked Facebook, not being on Facebook seems like a win. Especially if they are so capricious as to kick people without explanation. Fried has an excellent web presence that she controls. And could probably make something better than Facebook if she wanted to.

“I got kicked off of Compuserve/Prodigy/Genie and all I got was this lousy t-shirt and - the whole internet.”

Ok… but unless we know the reason for the termination of her account*, this doesn’t really say or mean anything, does it?

I’m sure there could be some kind of a politically motivated/sexist reason, but that’s a total catastrophizing speculation at this point, no?

*If there is one and it isn’t just a technical glitch.

That adafruit blog entry gives me the idea that some backstory exists here which neither Cory nor adafruit are spelling out.
Yet?

Regardless of the cause, bringing publicity to the issue may cause FB to be more communicative, or perhaps even reinstate the account. If it’s just a glitch, maybe this will make them move faster to fix it. Can’t hurt.

But, in all honesty, she’s better off not being on Facebook. It’s been 5 years for me, and I’ve never missed it.

But, seriously, how do you get kicked off of Facebook? I’ve reported genuinely offensive instances of posting, reported instances of clear identity theft, and then checked back and the accounts still exist. It’s just… fascinating how irresponsible Facebook can be, and how inconsistent.

Fair enough. But that’s a solution for people with social clout, pretty much at the expense of those who don’t.

I have heard stories about identity thieves who make a fake account with the same name and manage to get the real account banned as a fake.

And she is a woman on the internet…

If only she’d adhere to their Nazi / Russian / Nut job requirements.

Their super smart software identified her as a hacker, and naturally it banned her.

BTW, I thought this was a great idea: 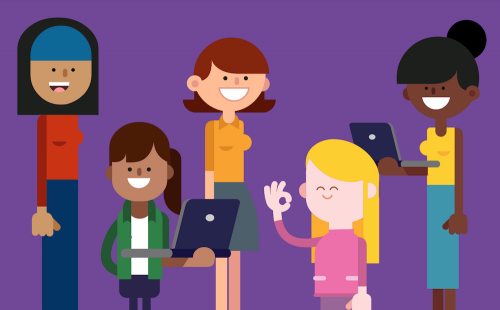 The CoderDojo Girls Initiative uses research and feedback from female Ninjas to recommend measures to increase the proportion of girls attending Dojos.

It’s working for me now. Whatever attention was brought appears to have caused it to be fixed.

But, seriously, how do you get kicked off of Facebook? I

Do something that impacts their ability to make money off you, of course. Nazis, aspiring Bond villains, sociopaths, and gamergaters are all welcome in Zuckerberg’s world. People who interfere with the monetization of their online identity, though, are beyond the pale.

And I’ve provided Facebook, after their “investigation”, with evidence of accounts that had copied and pasted images from other Facebook accounts for their profile pictures and I was still ignored and the accounts still exist.

In one instance, the identity thief even messaged me to chuckle and acknowledge my “good detective work”… and that account still exists.

I think it’s best to reserve judgement until we know more.

Maybe there’s a legitimate reason, maybe it was some bureaucratic error. I think there is a tendency to immediately get outraged, but I don’t want to end up like the idiotic Trumpsters who fall for Fox News promoting some story about “public school teacher fired for wearing crucifix” only to later find out the teacher was drunk on the job.

I can only conclude that there must be some trick to getting them to take action. Possibly being friends with an admin?

People who interfere with the monetization of their online identity, though, are beyond the pale.

Oh. And I thought just people of the female persuasion with nippels were beyond the pale.
/s