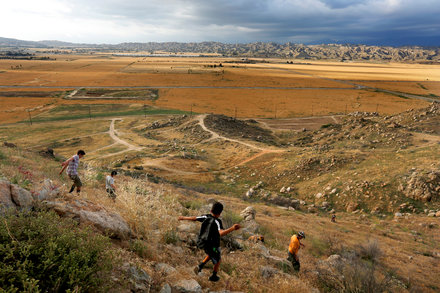 The advantage for developers is clear: Projects approved by ballot measures avoid legal challenges under the California Environmental Quality Act.

There is a twist, though: Residents often do not even get a chance to vote.

Once 15 percent of eligible voters have signed a petition, a project qualifies for the ballot, and local elected officials can either call a special election or accept the proposal without negotiating changes. Officials often approve the project to avoid paying for a special election that could further strain tight budgets.

“We’ve ended up with a warping of direct democracy to defeat strong environmental laws,” said Douglas Carstens, a lawyer specializing in land use and the environment. “It’s ramping up. Within a year or two, people will realize what a bad situation this is.”

I suppose there’s always the option of amending the constitution to explicitly forbid this sort of thing.

As a Californian, I have been increasingly annoyed with our initiative process that I generally refuse to sign petitions anymore. However, I would easily support closing this loophole and sign a petition to that effect.

It is amazing how much influence developers have. It’s not just with the local councilmembers, but with the public, too, because the developers convince the average yokel that development = jobs.

At least in my city, any possible controversial issue always goes to a public vote because our councilmembers are too afraid of losing their seat.

This topic was automatically closed after 255 days. New replies are no longer allowed.