To be fair, the lower part of the logistic curve looks a lot like an unmodified exponential curve.

Well… I’m not claiming the basic thesis about exponential growth is wrong per se but it’s not like overpopulation is not a (at least a potential) problem.

Hunger and lack of clean water may be a product of poverty, but poverty itself is linked to consumption of carbon and other resources which have to be mined or extracted from somewhere. We could shift our diets to a greater share of plant products without much real pain, but if you stop using biofuels (which I don’t consider a great utilization of our resources at this point of technological sophistication) the fuel will have to come out of the ground, at least for some foreseeable future. This will exacerbate the climate change problem and that will in turn hit agricultural production etc. etc.

The “wrong kind of people are having babies” argument is odious, but does anybody actually thing that we would be better off with 12 billion people on this planet?

But that’s nothing when compared to the alleged “exponential” human population growth, which persists despite decades and decades of slowing population growth. This one has a more sinister dimension, since the subtext is so often eugenic in nature: “the wrong kind of people are having too many babies.”

THANK YOU. I keep telling people this. Look at projections for population growth done by experts, they account for decline with good reason. Population is responsive to the environment. It’s not a single variable calculation.

Well… I’m not claiming the basic thesis about exponential growth is wrong per se but it’s not like overpopulation is not a (at least a potential) problem.

The part that bothers me is when people talk about population growth as the main problem in terms of resource management and environmental impact. It’s not.

There are basically two factors determining the extent of those problems: 1) How many people are on Earth, and 2) Per-capita resource consumption. But population growth has been slowing for generations now, and in fact we may even see “peak population” by the middle of this century if current trends continue. Meanwhile per-capita resource use has been skyrocketing, especially in the developed world.

So when I hear people in the developed world fussing about how we really must get this population thing under control to save the Earth it kind of feels like passing the buck. It’s mostly us car-driving, disposable-electronics-buying, meat-and-imported-fruit-eating people who are trashing the planet, not some family in rural Africa that had five children.

True. But it is kind of premised on the assumption that the poor people remain poor, or at least don’t adopt a lifestyle with the same level of resource gorging as we have.

So the family with five children in rural Africa does not represent a problem… as long as you more or less expect the children to remain subsistence farmers for their entire lives (and their children as well). Which strikes me as somewhat ethically problematic. (Yes, other societies may figure out a way to be prosperous in a more sustainable way than we are, but how soon and by what means?)

Population is responsive to the environment. It’s not a single variable calculation.

The way it responds can be pretty ugly though. Sure, some organisms’ reproductive systems are physiologically stifled in times of environmental difficulty, but more often the response involves starvation, predation, or disease.

The way it responds can be pretty ugly though. Sure, some organisms’ reproductive systems are physiologically stifled in times of environmental difficulty, but more often the response involves starvation, predation, or disease.

Humans have practiced family planning for millennia. There are also other pressures that keep animal numbers where they are in a stable ecosystem. Many species have lower fecundity when food is scarce or when population reaches a certain level.

So the family with five children in rural Africa does not represent a problem… as long as you more or less expect the children to remain subsistence farmers for their entire lives (and their children as well).

But again, that still goes to “those of us who live first-world lifestyles use too many resources” rather than “poor people are having too many children.”

So how many of those 9.7 billion will be named Clevon? 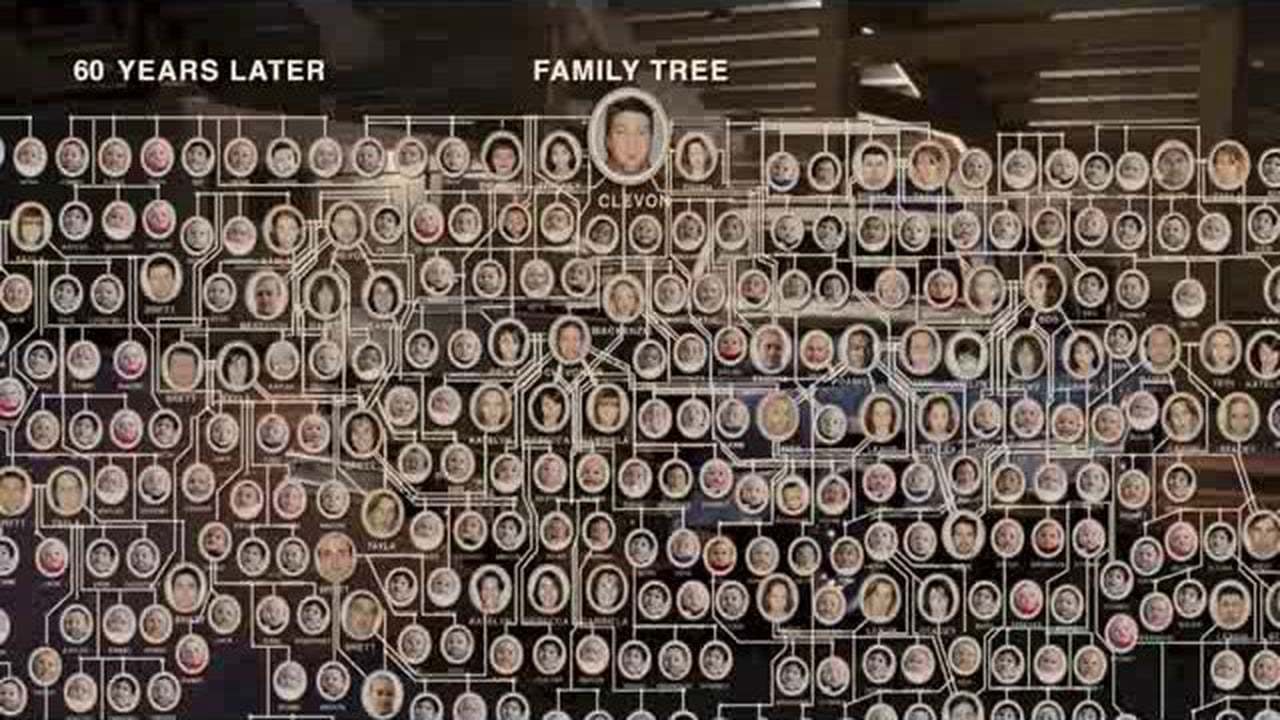 Yes… We certainly should consume less. No question about it. But I’m worried by our inability to put this realization into practical effect on a societal level. If we can’t bring ourselves anywhere near politically accepting the idea that maybe the GDP doesn’t really have to grow every year, forever, at the expense of the environment, how do we expect anyone else to buy it? Especially people who have not enjoyed the luxuries we take for granted in the geopolitical West?

What we have succeed in, if accidentally, is stabilizing population growth at some ~2 children per mother. So I guess that’s where I’m coming from on this issue. While the resource path to sustainability would be ideally preferable (on several levels), I don’t think it will ever be put into practice in a sufficient manner. And so I believe the theoretically worse solution should not be entirely dismissed - because we at least know it can be done.

Whether the population is growing exponentially or not, it is growing. As long as it continues to grow we can expect that at some point we will face a problem with limited resources, and at that point it may stop growing, but the cost might be an environment damaged beyond repair. We currently grow enough cereals to feed the entire world, but if there were a massive drought a la the Dustbowl, that would change things dramatically. I can’t say I have much faith in the ability of the human race to avoid catastrophes of its own making.

We certainly should consume less. No question about it. But I’m worried by our inability to put this realization into practical effect on a societal level.

Well, then that’s the problem we should really be prioritizing. As you yourself note, we’ve already more or less succeeded in solving the “population growth” side of the equation. All we need is for current population trends to continue for another generation or so.

Our track record so far has been pretty good, I’m betting at least a few of us survive to see the dystopian hellscape. Actualy, it seems population is declining in most of the wealthy nations. USA would be included, except for growth due to immigration. So maybe when The Pill comes to rural India, the curve will flatten out without continent-wide dieback.

Look at projections for population growth done by experts, they account for decline with good reason.

That’s your mistake, right there, see, looking at projections done by experts. They’re the ones telling us that climate change is happening as well, even though they’re clearly all in the pockets of the renewable energy industry. Obviously these particular experts are working for Planned Parenthood or some other bunch of extremists trying to force us to change our lifestyles to suit them.

For clarification, this is a joke. And it’s really depressing that I have to add this note. 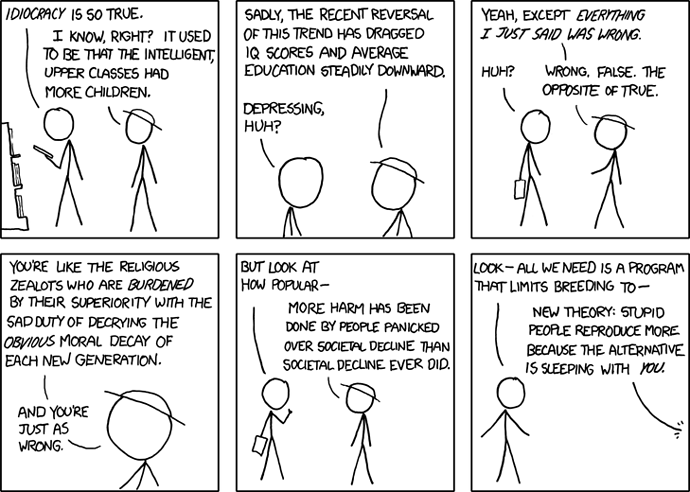 People aren’t going to change, for better or for worse. Technology’s going to be so cool. All in all, the future will be okay! Except climate; we fucked that one up.

The model that says human population is growing exponentially and will continue to do so at the same exponential rate indefinitely is almost certainly wrong. Not surprising as it’s stupidly simplistic. So what model of future population size would you prefer; Perhaps this one? 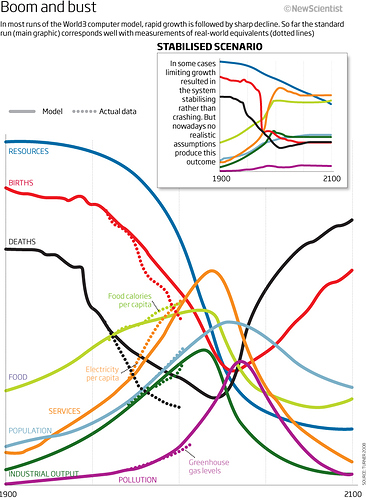 If the resource constraints don’t get you, the pollution will.

does anybody actually thing that we would be better off with 12 billion people on this planet?

I’m actually conflicted about this, in that yes, environmentally it is easier to improve sustainability of civilization at a smaller total population without sacrificing quality of life.

However, a larger population means faster innovation (for any given wealth and education distribution). One, there are more scientists/engineers/designers and there is more total surplus wealth/labor available. Two, the potential market for any new product/technology is larger, justifying spending more money to develop said product/technology (higher rates of return on R&D).

But it was growing exponentially. It’s wasn’t a stupid assumption to assume that wouldn’t continue.

If population growth slows you have to have a reason why. The idea that increased wealth means less reliance on children is not an obvious effect. Western society happened to turn out that way, but it easily might not have.

Get a good strong religious resurgence with an “Every sperm is sacred” attitude, and off we go again.

That’s assuming a fair division of capacities, resources and opportunities, which I would strongly argue would not be the actual case.

The likelier results of pushing towards the limits of carrying capacity are in my opinion large swaths of impoverished lawless or semi-lawless regions (likes of which we already see in Libya, Syria and Iraq and, to a degree, Afghanistan) bordered by 20-foot concrete walls mounted with autonomous drones and soldiers with orders to murder anyone coming within sight.