Facebook declares war on adblockers, claims it can prevent them detecting ads

As long as facebook thinks it knows what’s best for me and wants to force that on me without asking, I’m happy to just not use it, I’ve already got years of non-use.

it’s still, to them, a battle for control over what users can do on their own computers.

To be fair, they’re not exercising any control over what a browser does once it receives the ads. They’re just making the ads more difficult to distinguish from other content—like those magazine ads designed to look like articles.

Now, with such magazine ads, there’s a mandate that they be clearly labeled “advertisement”…

An advertising weasel at facebook used the phrase “We’re doing it more for the principle of the thing.”.

Engage all cranial pressure regulators! Fire control teams to the irony meter! I want a crack theoretical meteorologist determining the color of the sky in his world! Jaw-recovery team, prepare dropships!

I would dump FB, but it’s the only way I can talk to most family members and the Events feature is very useful. I block the timeline with a Chrome plugin at work and I really don’t miss it that much. It’s just those two things that I can’t find alternatives for that everyone would use.

I want to post this on Facebook while addressing my relatives and say, “this is why you should have followed me to Google+ years ago!”

“It just seems like a poor bargain to be forced to choose all or nothing. There’s a middle ground,” Mr. Bosworth said.

I’m not forced to choose ‘all or nothing’ - I freely choose ‘nothing’.

There is no middle ground for me: I have zero tolerance of ads. All ads. Everywhere. No exceptions.

Whoa. How do you make that happen?

All that it will take to defeat their ads is an ad-blocker with a crowdsourced repository of user-blocked ads.

Oh, “everywhere” meant “in a web browser.” I was confused.

Still, with such a setup, you don’t see (for example)…? 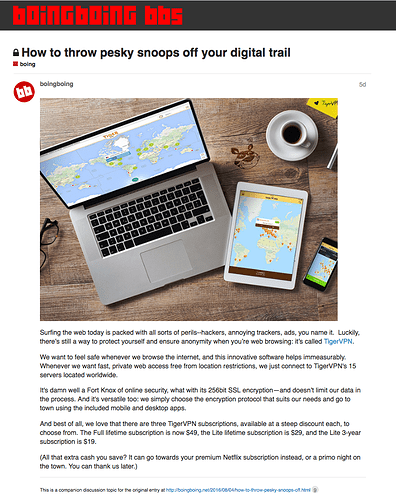 You can get close to everywhere by filtering at the router and OS level in addition to browser plugins. I have no banner ads on my firetv and Hulu shows me 2 minutes of nothing where the commercials would be. There isn’t really a plug and play answer though and stuff always needs tweaking. Skimlink URL rewrites, breaking websites, and evil modal popovers. Still waiting for my augmented reality sunglasses so I can turn the outside into ‘they live’

Social Fixer used to be one of my favorite add-ons, but it seems to be mired in development hell lately. I have switched instead to FB Purity, which among other things lets me squish “What’s Trending”. Between that and uBlock Origin, I have a very pleasant Facebook experience.

At least they don’t have auto-playing video ads. Is there no decent way of squashing those anymore aside from uBlock Origin? I thought we were long past such idiocy.

This isn’t really about new technology, or even about communication with the public; facebook is just trying to turn what would normally be another step in the arms-race between ad pushers and ad blockers into an attempt to reprogram the public into accepting less control over their property.

Sure facebook, it’s a “choice” between your control of my stuff or nothing, but we can avoid that! we just need to negotiate, right?

Or, alternatively, I could just ignore this nonsense and install the next iteration of ad-block software.

Google glass with Sharpie scribbled all over it? Although, for at least the first few minutes, that new-marker smell is an ad of sorts…

Simple: live in a state that forbids road-side billboards, avoid live mass-media (or use podcasts/DVR that you can FF through ads), use an ad-blocker proxy on mobile devices, and what @LDoBe said (except I use ghostery instead of privacy badger) plus Greasemonkey scripts for desktop/laptops.

Ministry didn’t say they were gone, just that s/he’s intolerant.

I imagine it involves a lout of incoherent shouting.

The web has become almost unusable without an ad blocker, and has been rapidly getting worse – for example, almost every web site these days seems to use a giant full page pop-up to show some trash (I don’t even know whether they’re ads or not, since I close them as fast as possible). And that’s /with/ an ad blocker protecting you.

Without an ad blocker, it’s practically impossible to use the web at all.

On the other hand, I don’t really see how this would change the Facebook experience since the only point of Facebook is to show spam and ads. I mean, the reason I have spam filters and blocked people is so I don’t have to see the latest chain letter. Why would I go to Facebook where there’s nothing else?!

Yahoo has been doing this for a couple of years already. They insert ad materials directly into their email and groups so that there is no way to separate them from the real content. Facebook will probably do something similar but less ugly.

What amazes me is why companies insist that eyeballs=money when they know that people are actively avoiding their products and services. Do they really see people who use adblockers as an opportunity - as if when they bypass the adblocker those who were avoiding ads will suddenly start clicking on them and generating sales? Views are not revenue when they yield resentment instead of sales.

Sure facebook, it’s a “choice” between your control of my stuff or nothing, but we can avoid that! we just need to negotiate, right?

Damn straight. The mistake most users make is assuming that they are alone. If it was just you negotiating with every company would be tedious and be difficult to get anywhere. But if a significant population really dig into them it has an effect. The rest of this population now probably feel like isolated individuals also. People need to organize and fight to protect their interests.