🔫 Firearms: Everything you wanted to know (and the opportunity to ask if you don't)

In computer security, there’s something called the Principle of Least Privilege…

I don’t think it works so well in the environment where the sysadmin is the federal government, and it chooses to determine what is the appropriate Least Privilege for you, wherever you happen to be, twenty four hours a day.

My first gun, a Browning BA-22 rifle, was purchased by my Dad in Japan when I was nine. I still have and treasure it.

I sometimes work on and off of horses, and more frequently four wheelers. I can keep a handgun in my bag or in a shoulder holster, and pretty much forget it is even there. A rifle, especially a scoped one, is awkward to carry, and you have to worry about banging the scope into something. Or rain. I carry a rifle when I can, because I very much enjoy shooting at small objects that are very far away, and it is a challenge to do that under differing conditions.
But I always carry a gun when I go into the mountains, which is most days. I understand that it is very rare that I actually need it. I also carry an MRE pouch in my pack, but I almost never get stuck on an unplanned overnight stay. Better safe than …

I don’t think it works so well in the environment where the sysadmin is the federal government, and it chooses to determine what is the appropriate Least Privilege for you, wherever you happen to be, twenty four hours a day.

Isn’t the Federal Government composed of us, citizens, and those we put into power?

At any given moment, at least fifty-one percent of us.

Note to all: please stay on topic. If you’d like to debate governmental regulation of firearms, there’s now a thread for that.

They are also crazy obsessed with guns

Some of them anyway. Most people here know nothing about firearms at all.

As for the airsoft market I’m 100% agreement

Well of course not all of them are. But I am consistently amazed how “right” they get depictions of fire arms in anime like Gunslinger Girl. Even watching Sword Art Online, when one character has a flash back of a criminal with a gun, I looked it up, and it was a Chinese knock off of a Tokarev. And if you are going to find a gun being used by a criminal in Japan, odds are it is a Chinese Tokarev.

The thing to understand is that these shows have a very limited audience who actually cares about these details than the actual storyline. Please dont take these shows as being representative of general Japanese cartoon/TV viewers at all.

Its exactly this sort of hyper focus on certain types of details that is the defining characteristic of Otaku. Note also that word still has very nasty connotation here. It was never otherwise unlike how the loan word version got used in American English.

All I am saying is I see the care to get details right more in Japanese media than in American media. An American comic book is more likely to have a cludged together weapon that looks realish, but not a real gun. (Though something like the Punisher would be more likely to pay attention to such details. Indeed Tim Bradstreets covers are very realistic.)

Anime and Manga often get every screw head in the right place. Even many of their fictional guns are realistic enough I would think someone could make a working replica, like in Hellsing. So someone at least cares about getting the little details correct, because the time and cost in doing so has to be more than not caring.

Handguns? I just hijacked your thread with a cup of Hereford coffee.

I have always been impressed with the guns in Archer.

Took this one out, thought I would show and tell

this is the one they modeled the Star Wars blaster on? 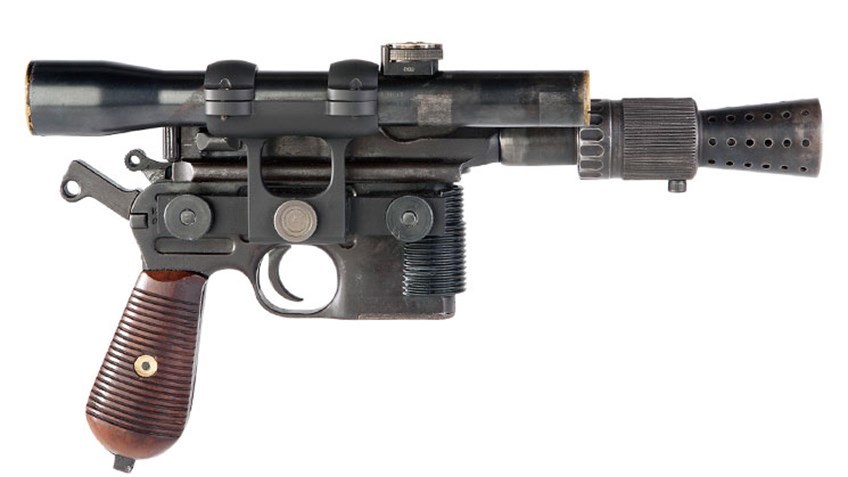 Jesus H Christ - someone HAD some disposable income.

And remember kids, stuff like this lies under Curios and Relics, thus it isn’t considered a short barreled rifle. Don’t put stocks on pistols normally (with out paper work and taxes paid).

WTF is that shot in, your fume hood at home? If you can’t tell, I am completely green with envy.

Yes, I have a place where I usually take images, but there is some other stuff there right now. The lighting is good in the fume hood, I sometimes shoot small objects there on a cloth background or something.
The hood is in the lab area of our shop. We do a lot of patination of metals, and mercury gilding. Old and dangerous techniques, but done under safe conditions.
I really like the C96. The cartridge is close to a 9mm (some are chambered for 9mm), it is fun to shoot.The only issue I have with it is that it is hard to keep it loaded with no round chambered. It has a great safety ( the lever under the hammer in the back), but I have a policy of never keeping a round chambered in any firearm that I am carrying, unless I am about to use it. Not that I would be likely to carry this around the ranch anyway. But that is an issue.

this is the one they modeled the Star Wars blaster on?

Not modeled - MADE. The original blasters of Star Wars were all based on and made from REAL firearms. Given that the prop departments in the UK had LOTS of old WWII stuff, that is why you see this and the Stormtrooper basters made from real firing guns, the troopers being British Sterlings. In the original films they actually fired blanks in some scenes which is why there is smoke in some of the scenes of the Tantive IV raid. Now not every gun was real - the ones not close up were usually resin casts. In RotJ one of the hero guns is made from a MODEL gun from Japan (Which means my blaster is nearly screen accurate and I could make it so if I chose to add greeblies to it.)

This is one reason why the originals are more grounded in a reality. And I am sooo glad they looked at gun design from this point of view for the new movies. The Prequels were obviously built by some prop guy who didn’t even play call of duty. Not all of their designs are horrible. but the Clone Trooper rifles just make a vein in my head pulse every time I see it. They obviously took a model of an original blaster and then flipped and copied certain parts. Which is why you have what used to be a scope as an awkward handle on the bottom.

You can find decent Chinese Norinco clones for a fraction of real German price. If you have friends in Canada their guns laws are ironically looser and they can import Norinco guns from China still. Though I don’t think you can import them in from Canada.