Seriously, who was the first guy who saw a duck and said to himself, “I’m gonna shove a tube down that thing’s throat and force feed it until its organs explode”

Though I’d largely like to stay out of this particular cluster fuck here’s something for color:

The Ethics of Foie Gras: New Fire for an Old Debate

A few years ago I wrote a piece called The Physiology of Foie: Why Foie Gras is Not Unethical which made its way around the internet and social media circles at the time. It's gotten tons of comments, most of them well-balanced, thoughtful, and... 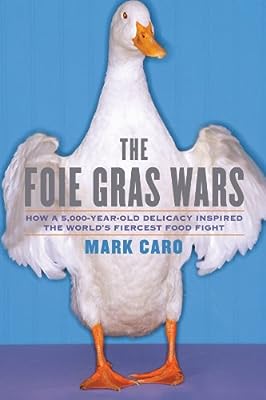 In announcing that he had stopped serving the fattened livers of force-fed ducks and geese at his world-renowned restaurant, influential chef Charlie Trotter heaved a grenade into a simmering food fig ...

It was a normal evolution of feeding procedures: farmers saw that the more the bird ate, tastier was its liver. So they gave them more food. Using a tube was just a logical step.

It´s just like babies, sometimes they don’t wan to eat, but we force feed them.

What shocks me is the hypocrisy, beef live in horrible conditions and is supped up with hormones forbidden in many countries, but what they found censurable in California is foei gras because reasons…

There’s also this great TED talk from Dan Barber about a producer of natural foie gras in Spain. His talk about sustainable fish is also worth a listen.

Great, now let’s hope they can now remove the daft ban on sheep lung… Hogmanay is on the way and I love a bit of Haggis.

Village Voice also covered this a few years back:

(Their answer is no)

Foie gras was a low-hanging fruit because it’s a luxury item. It’s a ban that doesn’t affect most people, so groups like PETA, who are seeking to ultimately ban all meat-eating, can target it without ruffling any feathers, so to speak. The irony is that while industrially farmed animals are kept in horrible conditions, ducks and geese raised for foie gras are not, at least in the US, and thus are actually kept in better conditions.

Nothing new about special diets for animals.

Japanese Beef get’s it spider web like texture of marbling from being feed a diet rich in beer.

And prosciutto ham depends on pigs feed a diet rich in the whey left over from the production of Parmigiano-Reggiano cheese.

And 4-H beef in America is great. These kids raise their cattle and feed it a mixture of grains and molasses. Then they sell it at auction.

Going by the videos I watched the force feeding is completely overshadowed by the conditions in which the birds are housed.
Caged animals with no room to stand up or really even move is disgusting and should not be allowed.

I would argue the force feeding is secondary to the slaughter in terms of morality. If you eat any meat and do not pay 100% attention to where it comes from and how it was raised, you have no say in this debate.
If you do pay attention and do not want to endorse cruelty even by association but still eat meat, I’d like to hear how you justify the slaughter but question the feeding.

Factory farming should be abolished. We should probably all get used to the idea of paying a lot more for meat.

Dan Barber has been the number one guy pushing Eduardo Sousa’s ‘‘natural foie gras’’ for the past five years or so. Interestingly enough Caro covered it around the same time Barber picked up the topic, and included it in his book. He raised some serious questions about the product. At the time (this was 6 or so years ago) Sousa apparently wasn’t producing any fresh product. Only packaged/processed/finished product. He apparently hadn’t ever sold any whole lobes. Wouldn’t show his full production process. And there were questions about whether he had access to enough ducks to produce the amount of Foie he was selling. It was also odd that the award he won, and a lot of the press he received came through a French Foie industry group that represents some of the least ethical producers in the business. The whole thing just seemed a little dodgy. Its been a bit since I re-read the book (my interest in the subject has waned but its good enough to re-read regularly) but it seemed like Caro came down on the end of taking Sousa at his word (ish), but that some one needed to take a closer look. Everyone else just seemed to take him at face value. And the closer look never came. I always found that odd, and I’ve always been curious to see if the suspicions had anything behind them.

I remember that one. This was all around the same time, there was a bunch of minor burbling in the 00’s then the Chicago ban came about around 06 and the whole topic seemed to explode.

Consider the possibility that this move only bolsters the government’s case when they have to move to defend the force feeding of prisoners.
If it’s humane enough for geese, it’s not torture.

Although there are important biological differences (geese have no gag reflex). The fact that we shoe horses doesn’t mean that it’s OK to nail pieces of iron to people’s feet.

EDIT: The converse also being true- the fact that you wouldn’t want a piece of iron nailed to your foot doesn’t mean we shouldn’t shoe horses.

Factory farming should be abolished. We should probably all get used to the idea of paying a lot more for meat.

What about gene-modding the animals instead to not have enough of brain to sense the environment much? Farming simple eat-shit-grow state machines with grossly limited sentience should not cause any harm, cruelty-wise.

Alternative to gene-modding is a suitable teratogenic chemical that will interfere with brain development in embryonal stage.

Edit: Just realized… this would be turning animals into vegetables!

Just before their migration the geese do this to themselves by gorging on food, which causes the fatty enlargement of the liver, in order to store energy. The enlarged liver goes back to normal after the migratory flight and it doesn’t seem to bother them.

I first heard about Sousa on This American Life in 2011. Unless the whole story is a complete fabrication, it makes a pretty good case that the problem isn’t the existence of Foie gras so much as the means often used to produce it.

If Californian restaurants can get Foie gras without torturing birds (admittedly a big if) then I say more power to them.

I heard the geese will eat all the food you give them. But to force feed them fattens them faster for processing of the bird. Does force feeding just comes from greed, and fast profit?

As fucked up as that sounds, I kind of agree with the principle. I always imagined a kind of vat-grown meat taking over the majority of production.

Creating genetically modified beings sans any kind of higher nervous system sounds ethically dangerous but I imagine there is an appropriate solution of that sort, given enough research and engineering.

I think I’m turned off by the idea of actual entities with genomes altered to ameliorate higher nervous functions because of the possible applications to humans. Guess I’m deep into the conspiracy fold on this one.

Of course, how a giant vat of stem-cell growth-assisted muscle tissue grown in a vat would manage without some kind of nervous system may very well throw a spanner into my ethical works.