Fox News yanked off the air in the UK

Karen Bradley said the transaction could give the Murdoch family too much influence over British media.

I think you mean the War of English Aggression.

“In the past decade Fox has notched up 22 breaches of its licence and Ofcom’s codes and rules. Of those, seven were against Fox News, with four last year including against a programme which featured a guest who said that Birmingham was a city “where non-Muslims just simply don’t go”.
Fox News was taken off air between 5am and 11pm on election day to avoid any issues with Ofcom”

You can also see the other problem from their viewing figures - I have no idea what Kix+1 is, but more people watch it! 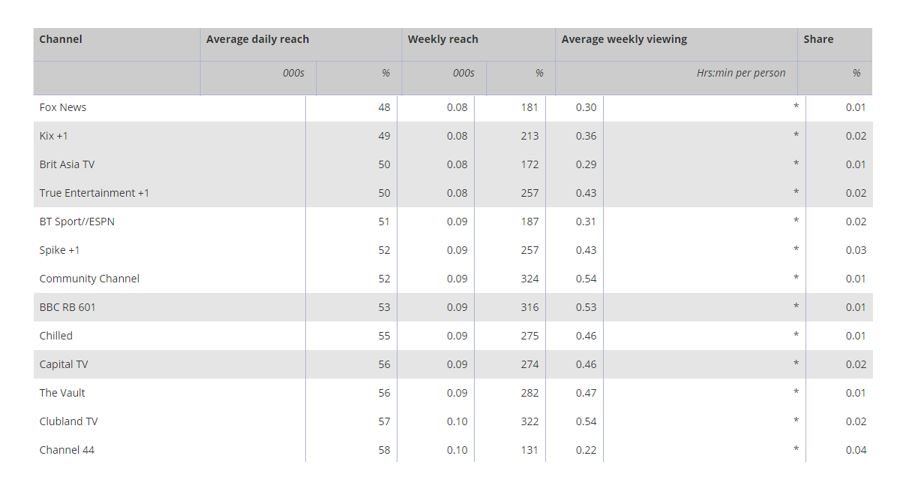 Pop Max (formerly Kix! and then Kix) is a free-to-air children's television channel in the United Kingdom, owned by CSC Media Group. As of June 2014, it broadcasts cartoons, action and adventure series, extreme sports and music videos on Sky and Freesat. Its target audience is 7 to 17-year-old boys. At 06:00 on 19 May 2008, Pop +1 ceased broadcast and was directly replaced on-air with Kix content. Medabots was the first programme to be broadcast under the Kix! identity.[citation needed]

News is supposed to be factual and true.

That road looks paved with shining intentions, but it leads straight to a very Chinese hell. Some enforcement of minimal standards is fine, but the bar must be purposedly set extremely low.

I don’t object to Fox News per se, tbh, but what I find extraordinary is that is so pervasive in public areas - to a foreigner, it looks like a Nazi wet dream. I personally would have no qualm with laws that force places like airports and bars to show a multitude of channels rather than staying on Fox (or in the UK, Sky Sports) 99% of the time.

What does the Fox say?

The data show that about 3 times as many people watch RT than Fox News in the UK - With an average of 1 min per person per week. Fox News average is unmeasured (as it’s less than 1 min).
http://www.barb.co.uk/viewing-data/weekly-viewing-summary/

See, this was news to me. Took a quick look, seems reasonable. Would you say the British standard is OK, or the “road to a Chinese Hell”?

It mosty is, but it’s joined at the hip with state ownership and control of terrestrial channels. Say you want to open a new radio - in UK you cannot just buy freq space, you must also submit a request to ofcom to justify what you’re going to use it for and why you think there is a demand for that. You also have to pledge a certain ratio of your content to public service (usually news bulletins, but also homegrown productions and so on) and a bunch of other stuff. This ensures your channel submission to certain rules, which ofcom can then enforce later (“you described news as a public service content, but they are too biased to be that - fix it or we retire your license”). For terrestrial TV controls are even stricter (although to be fair Channel 5 is constantly pushing the envelope in terms of showing as most cheap crap as possible), two out of 5 channels are state-run (bbc), at least one is state-owned (channel 4) although run independently, and then there are itv and c5 which are a mixture of public and private ownership if i remember correctly (feel free to correct me, i’ve not looked at them in a while). I expect most of the actual infrastructure is state-owned by now (ITV was the only company with some of that, back in the day). In such a scenario, applying direct and indirect pressure to comply is much easier than having to go through the courts. And of course, movie censorship is alive and well in this country…

For comparison, another scenario of heavy regulation I’m familiar with (Italy) is a complete shitshow. The infrastructure is mostly private, so private companies were able to basically flout the law for decades - they just applied political pressure to keep enforcement to nil.

In the US, the scale and typology of broadcasters’ ownership is so dramatically different, and so heavily stacked to private ownership, that I don’t see how you could enforce strong regulation without being so politically draconian that people on one side would quickly cry totalitarianism. Then again you seem to manage as soon as female breasts show up, so maybe it’s doable…

two out of 5 channels are state-run (bbc), at least one is state-owned (channel 4) although run independently,

The BBC is NOT state run. The state (the government) has no say in its output other than indirectly via Ofcom regulation. Whereas plenty of other states do indeed run TV mouthpieces. BBC is as independent as C4. I’m pretty sure ITV and C5 are wholly privately owned and run (again only subject to Ofcom rules) but no time to validate that right now.

The BBC is NOT state run.

Not certain as to which of Dyke’s comments you wish to cite, but whichever it may be, it probably amounts to allegations of attempted influence that does not amount to “state run”. Wanna see “state run” TV? Try China or N.Korea.

There are shades of grey. The BBC is at arm’s length, and you just need to glance at the Dyke story or how Cameron steered coverage by leveraging the funding negotiations, to see how short that arm is. They keep up appearances by letting a few big guns free to shoot, while everyone else is on a comfortable leash. It’s not NK but it’s not total freedom either, as much as we’d like to pretend it is. The BBC does some excellent work but there is no point trying to pretend it’s perfect.