Oh, speaking of Frankenstein, I’m suprised I haven’t seen the Summer of Darkness App on BoingBoing yet:

Conceived to celebrate the 200th anniversary of The Year Without Summer, this iPhone/iPad app tells the story of the famous summer Lord Byron, Percy Shelley, Mary Shelley, and their companions spent in Switzerland — the summer the world was supposed to end.

Basically, Frankenstein was written while the three were summering in Geneva in 1816 - but several recent volcanoes caused global temperatures to drop, causing crops to fail, the weather to be gloomy, and people to think it was the apocalypse.

These are journal entries and weather reports and other writings. Pretty fun so far.

And so does his monster. 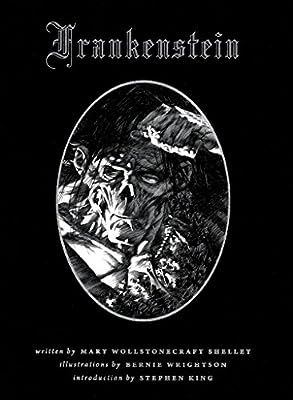 Few works by comic-book artists have earned the universal acclaim and reverence that Bernie Wrightson's illustrated version of Mary Wollstonecraft Shelley's Frankenstein was met with upon its original ...

I have a print from this illustrated edition.

According to the rules, three winners will be selected at random. So the quality of the story has no effect on the selection? Or does it mean that the submissions will be treated anonymously?

According to the rules, three winners will be selected at random. So the quality of the story has no effect on the selection?

That’s what I’d guess; there’s no mention of any selection based on quality of popularity.

Maybe the random algorithm will be weighted based on number of recommendations (like the NHL draft is random), but probably just random.

It’s too bad the Monster is so adorable; he’s been a subject for comedy for decades. It’s clear the sponsors of the contest want comedy. But Frankenstein is a horror story, Wouldn’t it be interesting to update the original, with current technology and more living-dead creepy goodness? With a nice big helping of, “My God, what have I done?”

Wouldn’t he have preferred to be a Frankenstein? It would mean that he wasn’t rejected by his creator and accepted into the family.