French Bigots: Sacrebleu! That is even worse!

So Muslim women who chose to wear a head covering can’t go out of the house, and children who are Muslim and observe Halal rules about eating get to go hungry during the school day…

So sick of this fucking endless parade of bigotry against all of us who are not cis-gendered straight white dudes from a Christian background… just sick to death of it… It helps NO ONE to discriminate against an already marginalized group!!!

Sometimes it’s not good to be French, like right now…

And yet they offer lunch options anyway. Think that’s of value to anyone, and think it matters if one group is excluded from that value?

It’s not the point that there might be workarounds…black people getting their own drinking fountains didn’t fix segregation.

It’s probably not a help to poor communities in France, where families might prefer to have their schools properly feed their kids while they’re there. With halal options no longer available these kids face the option of not eating at all, eating what they can (aka being able to eat less), or eating whatever the school gives them. To me this is not just discrimination but child cruelty

More and more, the Laïcité has been transmogrified from a tool to separate church from state into a particularly cruel and hypocritical form of pseudo-secularism. It’s not a co-incidence that change has tracked in degree and intensity with Muslim immigration to France (and also to Quebec, where similar crappiness is afoot).

Tthe problem here isn’t one of secularism per se but rather hypocritical secularism that gives the white Christian and Catholic majority loopholes to allow their religion’s food rules as the “default” while denying that privilege to others.

Specifically, it allows towns run by anti-immigrant and anti-Muslim and anti-Semitic bigots to make their schools less welcoming to Muslim and Jewish students while additionally allowing them additional the opportunity to preserve Catholic dietary customs.

I’ll put money on some small towns in France “co-incidentally” always serving fish on Fridays. In’m also sure if the French government mandated all vegetarian school lunches the leaders and many residents of those same towns would be objecting to it as an attack on national culture (because it’s not really about animal rights or climate change for them).

Secularism can co-exist with religious pluralism. That isn’t the case with the Laïcité as it’s been practised in France.

French public schools are famous for providing healthy and nutritious lunches for all students (Muslim ones now excepted).

Makes me wonder if they provide kosher lunches. That would prove beyond a shadow of a doubt that it was pure bigotry. (It’s basically the same dietary guidelines, even.)

According to the video, the situation is the same for kosher and halal.

The text seems to come from this article (which is slightly longer and repeated on many sites, no idea where the original is from).

No, now I do not trust news from a Turkish site close to the regime… I decided to find out more about the story and found the text used in the video posted on several (mainly Islamic) news sites (which I mentioned in my comment).
I do not disbelieve the story – that does not imply I believe everything on every site I read.

If they don’t then it’s proof French schools are just bigoted against minority faiths in general, instead of just anti Muslim. I wonder if they have vegetarian options.

The French have never been shy about antisemitism either for that matter.

This is being done locally by various mayors. If you remove halal meals because you are hostile to Muslims but hide behind animal welfare concerns, the obvious covering move is to remove kosher meals as well even if you have nothing against Jews.

French schools do provide vegetarian meals. IIRC some anti-halal communities now require students to register their preferences at the beginning of each term, so that Muslim students can’t choose the vegetarian option on days when the meat option happens to be pork.

Here’s a 2015 article from the Guardian noting the same thing. I highly doubt that the situation has changed since then. 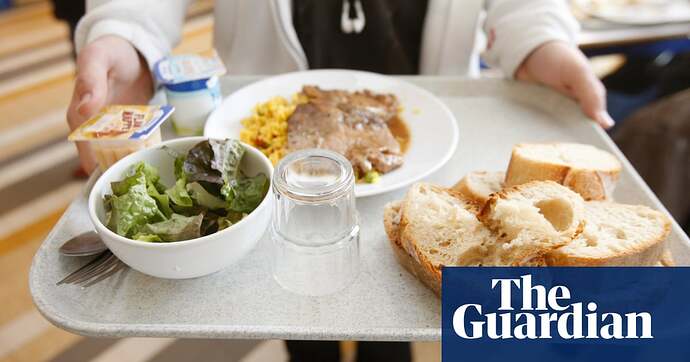 Pork or nothing: how school dinners are dividing France

The battle over national identity is being played out on children’s lunch plates. Is scrapping a pork-free option a victory for secularism – or just an example of religious intolerance?

Unlike in the UK, French state schools do not offer halal or kosher meat. Muslim or Jewish children who stay for lunch eat the same meat as everyone else. But on days where pork is served, a large number of town halls offer substitutes, such as a turkey sausage. Other towns offer vegetarian options.

This also further illustrates the problem. French state schools don’t offer halal or kosher meat as a matter of the state’s secularism policy, and leave it to local municipalities to find workarounds if they’re so inclined. A lot of smaller towns are run by bigots and don’t even bother to do that on days where pork is served.

That would prove beyond a shadow of a doubt that it was pure bigotry.

Sure, but given that the right wing is trying to cultivate support from the Jewish community by focusing on another out group, we should not wait for that to surface. The right wing in France will turn on the Jewish community once they’re done with the other groups they hate. They are for a “pure” France, purged of out groups, they’re just getting to them systematically.

Not in France. it is overwhelmingly the case that kids are sat down to a proper meal, all together at lunchtime.

I guess that may start declining and this latest fuckwittery is likely to accelerate that.

Tempted to ask if they refuse kosher meals, too.

You try to get a french person to eat a sandwich instead of a proper meal!

(Unless the sandwich is a croque monsieur/madame of course. But that is a proper meal)

Wow, that was a great piece, thanks! Hadn’t seen it before.
And the fact that they do it all for less than our shitty slop on styrofoam is really a point of shame.
But also to the main point of this thread, goes to show how refusing to serve Halal meals is not because of any creative or financial limitation. It’s pure bigotry. You wouldn’t even have to have separate options, or if you did, probably only a few times a year. All of the meals Moore mentioned would be fine for all religions, I think.

2 posts were merged into an existing topic: Sunlight is the Best Disinfectant