Frogs evolved black skin to adapt to radiation in Chernobyl

It’d be cool if the coloration were actually energy-producing, rather than merely protective, as is the case with some of the harder-core fungi in the zone of alienation.

In the voice of some bloated bigot on the internet: “THEY ARE MAKING THE FROGS BLACK!”

“Oh, you’re right, I misspoke. It’s really just that all the frogs without black skin died and the rare black-skinned frogs were better able to mate, and thus changed to overall trends in the population”

“so, if you could look right here at this definition of evolution for me real quick…”

I’m not sure exactly “how” melanin is able to absorb and transduce ionizing radiation, but since it is skin-level the result would be that it protects vital organs and prevents the cumulative effects of radiation exposure. Skin cells can be shed while, say, a liver can’t.

Chernobyl has proved a valuable laboratory for radiation research:

Radiotrophic fungi are fungi that can use radiation as an energy source to stimulate growth. Radiotrophic fungi have been found in extreme environments such as in the Chernobyl Nuclear Power Plant. Most known radiotrophic fungi utilize melanin in some capacity to survive. The process of using radiation and melanin for energy has been termed radiosynthesis, and is thought to be analogous to anaerobic respiration. However, it is not known if multi-step processes such as photosynthesis or chemosynt...

Communists did replacement theory! I bet these frogs are gay, to boot.

Did they also gain electric superpowers too?

well, i do think “evolved” is rather a strong word in this case. these frogs aren’t expressing new traits, and i doubt they’ve proved anything like it’s now become a dominant gene. frogs produce a lot of eggs and therefore have survivability dynamics built in to their existing genetic code

eta no one box:

Paul Kammerer has been called the perpetrator of one of the most celebrated scientific frauds of the early 20th century. He has also been defended as the victim of forgery by a lab assistant; some even say he was framed by political or scientific opponents. Now, a new analysis published this week suggests that his infamous experiments may have been the first demonstrations of a recently recognized phenomenon: epigenetics

One must assume so.

ETA: Ah, I see what you did there.

two-bit biochemist hand-waving explanation: the skin pigment melanin has a lot of “conjugated electron” moieties. that is, electrons which can readily shift to higher/lower molecular orbitals. so here comes a high(er) energy photon, either from UV sunlight or (Chernobyl) gamma radiation which strikes and is absorbed by melanin molecule via shifting the molecular orbital. this has the effect of stopping that high(er) energy photon from passing onwards and affecting any more vital nucleic acid molecule (e.g. DNA) which could cause tumors or other mutations. the melanin molecule then can revert to its lower energy state by a slower release of thermal energy. there… worth all you paid for it [wink] 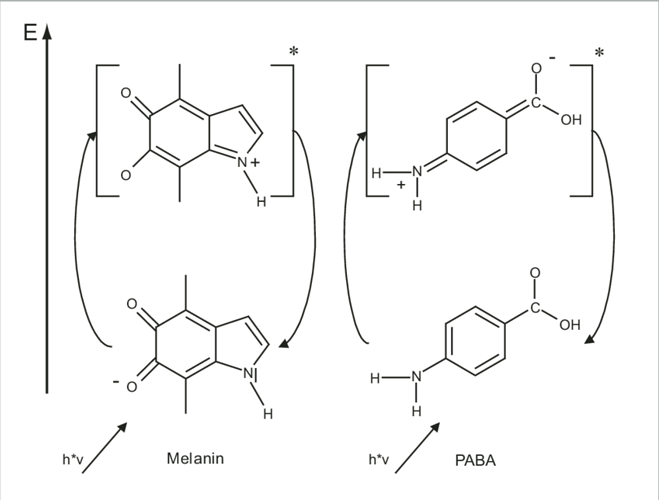 But seriously, thanks. I understood enough of that to gather that these frogs are both black and warm.

“so, if you could look right here at this definition of evolution for me real quick…”

Soooo many creationists explaining how “X isn’t actually evidence for evolution, because instead Y is happening,” where “Y” is actually a textbook description of evolution… Turns out that being completely ignorant about the thing you’re trying to deny makes it really hard to come up with an argument against it.

The protective power of melanin from ionizing radiation from radioactivity has me a bit confused, because my understanding was that radioactivity generally produced particles and photons with considerably more energy than ultraviolet light, where I wouldn’t expect the molecular orbitals to be relevant. I dunno, maybe there’s enough ultraviolet light produced either directly or indirectly from the radioactivity to make melanin beneficial.

You’re correct to be confused (and my explanation above was attempting to be a terse “hand waving” summary). As you elude to there’s sufficiently more energy in a gamma ray photon than a UV photon that we can’t expect the same capture mechanism (electron orbital pushing scheme) for both. There is nonetheless evidence of melanin affording protection against gamma radiation, and there are mechanisms theorized (typically involving re-dox pathways or radical formation yet which also manages a reversal via conformational thermal routes), but await (as always) more research. ((want to get into social sci-fi? does this mean humans with darker pigmented skin should be in the vanguard of radioactive spills? nah… better not go there [wink]))

They can hide from it better.