Water is for toilets

There’s the troubling correlation with tooth decay, too.

Effects of sports drinks and other beverages on dental enamel.

A high percentage of people consume soft drinks that contain sugar or artificial sweeteners, flavorings, and various additives. The popularity of sports (energy) drinks is growing and this pilot study compares enamel dissolution in these and a variety of other beverages. Enamel blocks (approximately 7.0 x 5.0 x 2.5 mm) were sectioned from sound extracted human premolars and molars and measured, weighed, and immersed in the selected beverages for a total of 14 days. The pH of all beverages was measured. The enamel sections were weighed at regular intervals throughout the immersion period with the solutions being changed daily; all studies were performed in duplicate. The data were subjected to one-way ANOVA with post hoc Scheffe testing. Enamel dissolution occurred in all of the tested beverages, with far greater attack occurring in flavored and energy (sports) drinks than previously noted for water and cola drinks. No correlation was found between enamel dissolution and beverage pH. Non-cola drinks, commercial lemonades, and energy/sports drinks showed the most aggressive dissolution effect on dental enamel. Reduced residence times of beverages in the mouth by salivary clearance or rinsing would appear to be beneficial.

Of course, the effects there are supposedly mitigated just by rinsing with water afterwards.

To be fair, water can kill if you’re severely dehydrated and drink gallons and gallons. My son was surprised when I told him electrolytes are a real thing.

Also most people who drink sports drinks do not drink them during sporting activities (period) let alone the activities that would really benefit from sugar water with electrolytes.

For their stated use, they work very well, and hydrate while maintaining your carbohydrate reserves so you don’t end up hitting “the wall”. But I haven’t found them to be useful unless I was running more than 15 miles at once. That is a short list for me as a life long lover of cardiovascular exercise of various kinds. I can’t imagine what it looks like for the rest of sports drink consumers.

All that said, this story is bananas. Not coincidentally, what you should be eating while drinking water after a workout. Just look at them!

Came here for that. Plan B initiated.

WC Fields was a Gatorade lobbyist?

If it comes from a bottle, it’s already not in your interests to drink it. The biggest sin that business has perpetrated on the American public’s diet in the last half century is the degradation of public water utilities, and the simple benefits of free, clean water…

To be fair, water can kill if you’re severely dehydrated and drink gallons and gallons. My son was surprised when I told him electrolytes are a real thing.

Too much of anything will kill you.

Except Boba Fett collectibles. One can never have enough of those.

Back when I was doing logistics for a long distance bike tour we would offer both water and Gatorade at the aid stations.

We found that at full strength, Gatorade was just too much for most people and caused a high amount of gastric distress after 8-10 hours in the saddle. We watered it down pretty heavily so it was about 3:1 water/Gatorade.

Personally, I prefer plain water (like from the toilet). 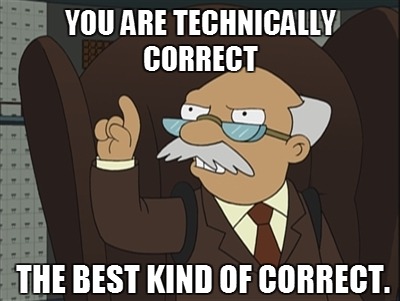 For their stated use, they work very well, and hydrate while maintaining your carbohydrate reserves so you don’t end up hitting “the wall”

I myself found that first sip of Gatorade was almost orgasmic when I had run 5 miles in brutal summer heat. But even I stopped drinking it because I just realized it was glorified sugar water. I do still sometimes drink other sports drinks but I will water them down.

I myself found that first sip of Gatorade was almost orgasmic when I had run 5 miles in brutal summer heat.

Yeah, that’s how I felt too. Turns out that when you have stupidly let yourself get very dehydrated, water with some sugar and salt is literally what the doctor ordered.

Then again, the recipe for Oral Rehydration Therapy (which is used to prevent actual death from dehydration) is 24g of sugar in 1L of water, where gatorade is 34g in 0.6L. I’ve mixed the stuff up at home, and it has that same insanely good feeling if you are just back from a run, but if I try to drink it when I’m not desperate for a drink it’s a kind of gross level of semi-sweet that really puts me off.

I don’t find them so refreshing, really. Water is better. The sugar almost makes me more thirsty. I also prefer to water them down, even if I am drinking them after a workout.

Yeah, there’s just way too much sugar in gatorade. If I need a hit of electrolytes, I add a little lemon juice and salt to water. I find it tastes better, but watch out for when it tastes like sweet delicious lemonade.

I can’t touch Gatorade - it gives me a painful, burning stomach immediately on drinking a mouthful of it, even when doing heavy exercise on a hot day.

There needs to be more to the case than is stated here.

Is actually not a misleading statement. Especially since it does not establish a causal relationship between performance and water, such as “keep your performance level high by avoiding water.” Like anything it is subject to context, but I would describe it as generally bad advice rather deception.

But if it was up to me, I would categorize all advertisement and marketing as being forms of harassment. The invention of the search engine long ago rendered ads irrelevant.

Grammar. How the fuck does that work!?