There is no such thing as HDTV antenna. Any old antenna will work. I’m still using a 30 year old roof top unit.

Hmm, up to 35 miles away, as long as there aren’t any hills in between…

I live in a valley, so I’d need a large tethered balloon and a very long cable.

The perfect gift your your grandparents!

co-ax thru window connected to stripped lamp wire on a coat-hanger armature, reporting in.

my market is flooded with channels. i disable the crap ones and still get the large networks plus probably 20ish good-to-mediocre channels. i’m in a low, heavily wooded location, so there’s a few that i want that don’t come in, but i have no confidence this or any of the many antennas like it on the market will do any better at pulling in those signals.

anecdote: i watched the first Superb Owl that was broadcast OTA digital with a simple paperclip; one wire straightened and stuck into the coax jack. perfect reception.

SRSLY?
You’ve got internet but you want to watch real-time TV channels? What are you thinking?

It used to be that some broadcast stations streamed their shows with comparatively minimal compression. Mpeg2 is less efficient than newer codecs, and 19.2 Mb/s ain’t what it used to be.

On Amazon there are 3 version.

Your description claims 25miles, shows no amplifier but is prices like the most expensive version. I have no idea what you are selling, and no idea if it is a fair price or not. 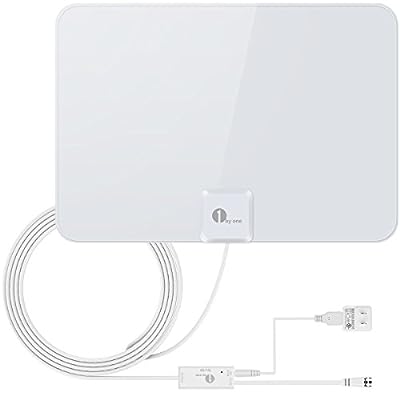 IIRC, amplifiers merely compensate for signal losses between the TV and the antenna. Which may be unavoidable if the antenna needs to be placed in exactly the right spot. But it’s all a bit voodooish to me.