Spoo are regarded with contempt by most species in Babylon 5; they "are the only creatures of which the Interstellar Animal Rights Protection League says, simply, 'Kill ‘em.’

Does the encyclopedia have an ebook edition?

Even better, it comes with an online edition. You can purchase it separately (and it will continue to be sold even once the print edition is finished).

WHAT ARE THE BENEFITS OF THE ONLINE MULTIMEDIA EDITION?
• Pay once, access forever
• Pinch and Zoom images
• Over 1,000 entries feature video related to the headword. These videos are in addition to the high definition CGI sequences fans have never seen before.
• Production notebooks for selected episodes. Production notebooks catalog the behind-the-scene reports and documentation including shooting scripts.
• Over time we will also be including convention video from when the show was in production as well as tons of behind the scenes photos.
• Searchable
• Continually updated
• Portable, always have it with you via tablet, phone or connected computer
• All entries are that contain other headwords are hyperlinked that entry.
• No shipping charges, tax or VAT.
• Takes up less space/weighs nothing
• View entries alphabetically, by episode or by category (aliens, ships, etc) or by source (example: all entries from Babylon 5 novel “To Dream in the City of Sorrows”.
• Exclusive B5 trivia, word search puzzles, crosswords

Well you still got the lurker’s guide to babylon 5!

Many, many, many moons ago, I did my own B5 encyclopedia.
Those who have nothing better to do (and who have a high tolerance for terrible jokes with high UK pop culture content) may look here:
https://www.scurra.com/babylon5/
I apologise in advance.

Spoo is a type of food popular in the Centauri empire, not an animal.
Some liken it to tasting like chicken, but not according to anyone that’s actually tried it.

Spoo is a meat based food product produced by the Centauri Republic and is a staple of the average Centauri diet.

The Spoo itself is a small, pasty white mealy creature that is ideally raised in a damp, m o i s t, somewhat chilly environment and is generally considered to be among the ugliest animals in the known galaxy, except by the pak’ma’ra, who think spoo simply look like they don’t get enough exercise.

“ "Would you like some spoo? It's fresh." "Fah! Get that away from me. Spoo needs to age. It takes time to cultivate its flavour. To eat fresh spoo is to insult a Centauri." – G'Kar and Londo. Spoo is a meat based food product produced by the...

EDIT: I really hate that people have such an issue with that “m” word (meaning not dry/not wet) that it has to be auto blocked here. So fucking ridiculous.

Just looked at the prices. Nope, not affordable, sad to say.

And that is why we need a neural net to understand what is pictured in the renders and recreate it at a higher resolution. A human could in theory do it frame by frame, so I guess in not that far fetched that a AI could do it.

I’m not saying it is happening right now, but the examples shown on various BB posts are encouraging. No hurry, I’ve got a few decades probably until full blown dementia. 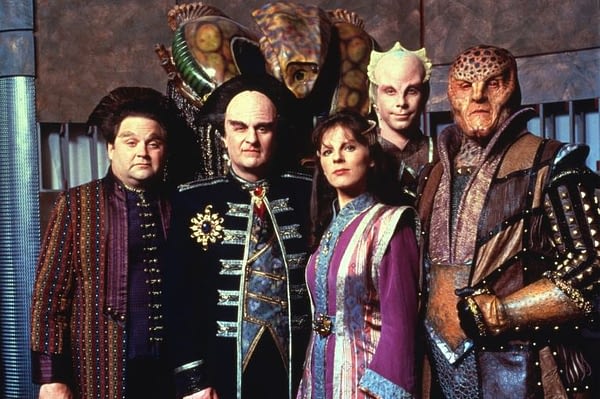 During an extended series of tweets on Thursday evening, Babylon 5 creator J. Michael Straczynski expressed at length that the award winning science

But what if instead we get this:

Wow! While I like the show and know people that worked on B5 … What does this get me that I can’t just learn from hitting some B5 wiki or something?

A pair of really heavy books, suitable for braining any Drakh who come to take you away.

My friends and I started re-watching B5 together, one episode a week. We’re up to episode 15 of season 1. This is going to take a while. But for one of us this is the first time he’s seen it.

Even if said AI improves upon this to some lower level of acceptability for production standard, I suspect @Glaurung (the most magical of Tolkien’s dragons), is still right: the audience isn’t there to justifiy even that level of effort.

Me! I love print. I’ve got a lot of books, and this was on the air during my twenties and I’ve fond memories of trying hard to scrape up a TV and a VCR to watch the latest, taped episode via friends.

It was a bit of a mess that when Netter Digital ripped away the show from Foundation Ron send them all the asset files with the filenames truncated to 8.3.

It was probably hell from them to get anything loaded. I bet nobody would have a working versions of the original scene files to re-render.