They want to make it easier to sell (expensive and highly profitable) silencers, and armor piercing rounds, you know, for those duck hunters who want to quietly shoot at kevlar-wearing ducks.

The sad thing is that:

A. It is indeed all about selling more product.
B. It’s indeed not about duck hunting or even hunting.
C. It’s not really about shooting people either (I suppose tangentially)

It’s about selling Machismo. If they could sell flaming codpieces in the name of home defense or whatever instead of something they had to spend a ton of money lobbying to sell, you can bet they would.

I know, baseball, guns, on Flag Day. Most American thing ever.

Silencers are not the same as surpressors

Is this event going to lead to a call to silence the violence-loving liberal libtards?

Owning a gun gnu basically turns you into Richard Stallman.

the baseball game had me going “this can’t be real, right?”

After airing it for several decades, the network cancelled This Can’t Be Real at the end of the 2014-15 broadcast season, stating, “There is just no demand out there any more for a distinction between satire and reality.”

Well wouldn’t you run away from a guy wearing that… also I kinda want one now.

Silencers/suppressors got more or less the same treatment as switchblades - they seem more scary and evil and weren’t that popular at the time except for certain criminal elements - or at least that was the perception.

Like a lot of things, there are a ton of myths and misconceptions. As other said, they don’t actually silence anything. That “pe-tew, pe-tew” sound in movies and video games is pure fiction. Yes it does quiet things down. No it doesn’t really make it any more dangerous. While it is a popular tool in gangster movies, actual use in the crime world is pretty low, even though any one with a lathe can make one (even before being added to the NFA list).

Removing them from the NFA would have no affect on crime, especially hot spots with high amounts of street crime, as suppressors make it much more difficult to conceal a gun. It might make a hit mans job easier, but lets be honest, “hit men” are mostly Hollywood myth/exageration, they aren’t nearly as prevalent as one would think from the movies.

Right now the number of lawful owners eclipses dramatically any criminals with them and it hasn’t been a problem.

Ironically, in some European countries, where there is less space to shoot, they are more common and way less regulated and seen as common courtesy. Heck you can buy them off the shelf in the UK, and people have gotten in trouble trying to bring them back.

There really is little reason for them to remain on the NFA with the absurd $200 tax and the restrictive class III for makers. It truly does make it much easier on your ears for all around. Even with hearing protection you can appreciate the difference. It also makes it more enjoyable for new shooters.

A. It is indeed all about selling more product.

If they take it off the NFA list, they will retail for $100 or less for many common calibers, until people start making them in China, in which you could easily buy a cheapy one for half that. OH sure, some will charge a premium, and some will be better than others. But the old, proven designs are duh simple to make - its basically tubes within tubes.

You’re right it is mainly a toy, but its a fun toy, and it has practical, real world benefits making it quieter for all around (including those who live miles from a shooting range). As well as indoor rangers where the sound reverbs and echos.

Silencers are not the same as surpressors

Everything the NRA and gun lobbyists do is to help manufacturers. The NRA doesn’t represent Americans’ right to own guns, they represent gun companies rights to earn profits.

also I kinda want one now.

Be careful what you wish for:

Interview with Blackie Lawless of W.A.S.P. - House of Hair with Dee Snider

Interview With Blackie Lawless for House of Hair Online By Ray Van Horn, Jr. HOUSE OF HAIR: I’d like to start by talking about you growing up on Staten Island. There are so many notable musicians from the area I feel like there ought to a book...

BL: You know, the old joke was when I had the exploding codpiece. It blew up on me on opening night in Dublin, Ireland in ’86. We had tested that thing for months and it came off without a hitch. What happened was the explosives were flown over for the show and they became compressed because of the altitude.

“I didn’t think it would affect ME!”

It seems that those who predicted more political violence if Trump was elected were correct, I guess.

Generally a derailing tactic. If you don’t know single-action from double-action, you have no right to point out the fact that bullets kill people.

Because hate crimes are apolitical? I have seen a lot of people saying the guillotines are coming around here, a joke but a joke that comes from a true spot.

Everything the NRA and gun lobbyists do is to help manufacturers. The NRA doesn’t represent Americans’ right to own guns, they represent gun companies rights to earn profits.

Those who root for the arrival of the guillotines should spend just a moment or two pondering the fates of Hebert, Danton, and Desmoulins.

I didn’t realize that ear plugs and safety ear muffs were no longer an effective option.

It depends on the situation, at a shooting range ear protection is definitely better and should be used even with a suppressor. If your hunting then being able to hear others around you, or worst case another hunter down range of you, can be very critical.

It’s a tribal identity thing, like geeks echoing obscure movie quotes (most of the sources of what was ‘obscure’ when I was a proto-geek are now so mainstream it seems odd to think they once were almost secret codes). You see this crop up in a lot of technical fields and hobbies. It becomes a way to separate the casuals from the hard cores. 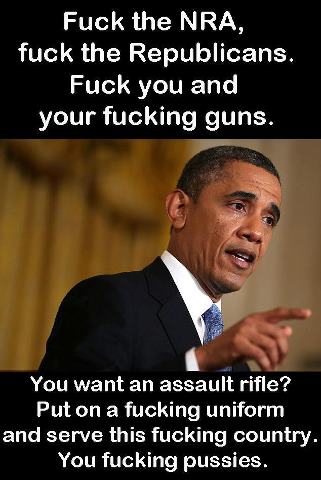 I confess from the start of this: I enjoy unproductive talk. Boasting, bloviating, berating, shouting, snarking, and swearing are all pleasures, indulged with little if any guilt. My purpose is not… 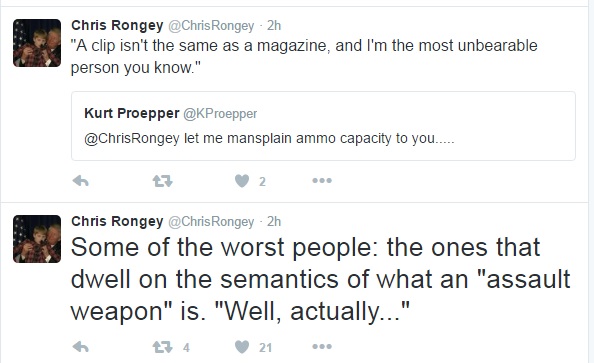 In Support Of A Total Ban on Civilians Owning Firearms