If we had MOAR guns, then the ‘good’ guys would take out the ‘bad’ guys!! The NRA says it so it must be true!!

Dear God how awful. Is the shooter very close to the airport, or are they overreacting?

Planes fly right over there on final to Lindbergh, real low-- at that point, they’re fifteen seconds off the runway.

So knife attacks are the NRA’s fault too?

Too bad we don’t live in the utopia of Europe where nothing bad every happens and everyone is tolerant and rational and everyone gets along.

Throughout Europe's migrant crisis, Sweden has laid out the welcome mat for... 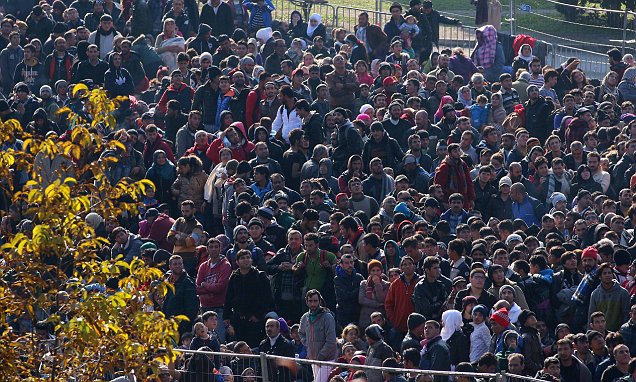 Shotguns have 'virtually sold out' in Austria amid migrant fears

In a country of 8.5 million people, there are now an estimated 900,000 firearms in homes, with gun dealers report that it is women driving the sales rush.

You could do better than quoting the daily mail.

A stabbing rampage? Was it an exchange student from Britain or something?

I know it’s a rag - it came up in the top searches. But even a broken clock is right two times a day.

ISLA VISTA, CA—In the days following a violent rampage in southern California in which a lone attacker killed seven individuals, including himself, and seriously injured over a dozen others, citizens living in the only country where this kind of mass...

I promise you we are not living in paradise over here. But maybe you shouldn’t quote the Mail, it is not known for reliable reporting on anything–especially not on matters concerning refugees, they have a history when it comes to people having the audacity (Edit bcs spell checker) to flee war. So maybe you need to dig a bit deeper.

Nontheless, as far as I am aware, Europe is not yet up in flames and things are ticking along just fine. There was a high profile right wing attack against the Mayor of Cologne who is known for her support of refugees http://www.telegraph.co.uk/news/worldnews/europe/germany/11939731/German-politician-stabbed-on-campaign-trail-is-elected-new-mayor-of-Cologne.html.

All in all, curiously enough, we still mange to have less people killed by guns, longer life expectation, lower infant mortality, and smaller prison population than the US, so whatever we are doing can’t be all bad.

Visualization of firearm-related deaths per 100,000 by country:

even a broken clock is right two times a day

So one has fired shots but not killed or injured anybody and is being contained by the police, and the other is a knife wielder who injured five but didn’t get anybody killed but himself?

Those are pretty awful ‘rampage killers’.

No one confirmed as dead in either location, no one even actually wounded in San Diego (at the time of this writing, and hopefully to the conclusion of the incident), and flights are allowed to take off, just no landing. I’m as horrified as anyone about all the shootings and am no fan of the NRA, but I don’t think ‘rampage killings’ is quite justified as a headline here.

Even a two headed nickel is fair half of the time.

Visualization of firearm-related deaths per 100,000 by country:

Could you give us a source for this please?