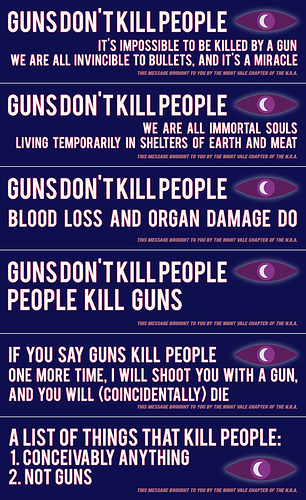 Do you like quality, exclusive merchandise designed by independent creators that makes everyone feel good? Then this is the place to which you must be.

OK - what law would stop people from irresponsibly keeping firearms accessible to toddlers? Please be specific.

Would you be able to enforce that law, or is it the sort of thing that is used to charge after the fact?

I puked in my mouth, thanks BB…

You shouldn’t leave box cutters, chainsaws or rat poison where your toddlers can get them either. Boxcutter crime has killed 2996 people in the last 15.1 years. Sharp object control now!

I suppose those statistics include The Albequerque Kid, a boy so ornery, and fussy ‘bout his eatin’, he once shot his own parents for ordering a pizza, ranch-style…

Yeah. Good luck with that.

Came from a guy with stuff for brains and stuff for ethics so I know it’s true.

But don’t you see? If those people who had been killed had had guns on them, they could have shot the toddlers first, thus neutralising the terrible threat.

This is what some people argue. Those people are fucking morons.

There are things that can be done to seriously reduce the incidence of firearms violence and mishaps. This, for instance:

Gun laws in Australia are mainly the jurisdiction of the country's states and territories, with the importation of guns regulated by the Federal Government. A person who possesses or uses a firearm must have a firearm licence. Licence holders must demonstrate a "genuine reason" for holding a firearm licence and must not be a "prohibited person". All firearms in Australia must be registered by serial number to the owner, who also holds a firearms licence. Firearms were introduced into Australia wi...

I didn’t say that. I asked what laws one thinks are prudent, specifically, to prevent children from using improperly stored firearms.

I guess mass restriction, banning, and creation of a massive licensing and tracking entity may help curb the 43 toddlers out of 300+ million Americans for hurting themselves and others. Whether that is prudent or not, I dunno.

The other issue of violent crime is a different issue. Australia never had the violent crime rate the US had because its social-economic make up is different as well as the various cultures we have in our great melting pot.

The photos of the girl holding the AR pointed at someone and the other with the handgun not pointing it downwards are chilling to me. I learned how to shoot rifles in the Boy Scouts and learned a healthy respect for the position of a muzzle. The other photos seem to be of kids in various levels of firearms education, and that’s fine. The headline photo’s actually an airsoft gun, which is probably better for initial education.

No guns kept in a home where a child lives. At all. There’s one for a start.

Children are not known for their lockpicking skills. No unlocked guns in a home with children, yes that is simple common sense. Guns are one of many things that you have to keep away from kids. You don’t have to remove every sharp or poisonous object from the house when you have kids either.

And to you - that is a prudent measure? Really? How about stairs? 100,000 children a year are treated in ERs due to falls from stairs. Twice as many children (~100) drown in Bathtubs per year in the US.

Unless were’re prepared to interpret having children as waiving any and all Constitutional rights, I don’t think that’s going to fly.

Not to take anything away from the overall point being made, but there’s no way that little girl could lift the white & pink rifle like that if it were real.

Ok then, amend the constitution.

And to you - that is a prudent measure?

Yep. I’d much rather see that than more innocent people getting killed