"Gravity" floats in on rave reviews

Spoilers ahead. In fact, if you are worried about spoilers, why the hell are reading this discussion thread? Go away. Watch the movie.

Do you know what I actually like the best about Gravity? How few Hollywood tropes it had. After watching the Hollywood trope filled abomination that was Elysium, you really can appreciate Gravity. If Gravity had been written by the same monsters that wrote Elysium, it would have been filled with tearful flashbacks of her child, some long and drawn out shitty dialog from Cloony when he was floating off, and some hamfisted moral dropped on your lap with the subtly of an asteroid.

They did so much right with Gravity. They let it speak for itself. On top of that, they made a vague effort to keep it realistic. They took artistic license, but only when needed. Sure, Hubble and the ISS will NEVER been in even vaguely the same orbit, and maybe the debris wouldn’t be such an epic and dense buckshot, but outside of a few bits and pieces here and there… not bad.

In my jerk off fantasy, Hollywood is going to see the epic reviews and big box office numbers and go “Hey, maybe we should shoveling stupid cliches and tropes into all of our movies. It appears people like them better when we don’t do that.” I won’t hold my breath. I am sure some asshole gave Michael Bay another 100 million to make another atrocious transformers movie.

“gravity gets to expose factual errors in astronomy”

I think Rob’s trying to point out that astronomers make mistakes too.

I, for one, was fine with the artistic license on orbital mechanics. Rarefied debris traveling so fast you’d only see the hole it made in you wouldn’t be much of a visual feast, and explaining inclined orbits, probabilistic mechanics and how much energy it takes to change orbits quickly would not fly with a movie theater full of flatlanders. I can even deal with them depicting the MMU as though it turned on a dime. I do wish they’d shown the liquid cooling undies that keep astronauts from cooking in their own bodyheat. They went to such trouble to point out that there’s no sound conduction in space. Well, guess what, no thermal conduction either! If I want to see Sandra Bullock in her gym clothes I can watch any one of a dozen other movies.

If I want to see Sandra Bullock in her gym clothes I can watch any one of a dozen other movies.

You can never have enough of Sandra Bullock in her gym clothes.* 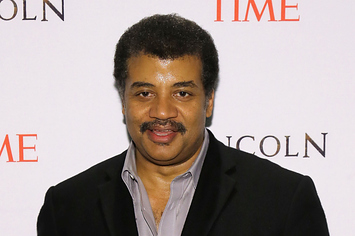 The renowned astrophysicist is apparently unhappy with some of the factual accuracy in the Sandra Bullock-George Clooney space-set thriller. Some SPOILERS ahead.

The only thing I didn’t like was how Sandra Bullock’s character was at the start of the movie – screaming and so afraid that she doesn’t make a sensible decision for about half the movie. I realize this is the kind of character you want to see succeed, and that when she finally does, you agree she’s really earned it.

It’s just a pet peeve, where I don’t like helpless frightened female characters. Ex-Buffy fan, what can I say.

I was skeptical any astronaut would so thoroughly panic. But if there’s any situation that could make the right stuff lose it, that’d probably be it. Me, I’d be filling my adult diapers.

I wish I could go and watch it. But it’s only showing in “Real3D” which I cannot stand with my vision, it makes my eyes hurt for days after watching a movie using that process.

Interestingly enough, I have no issues watching IMAX 3D movies, but it’s not showing there here.

I really enjoyed it. I can overlook differences from reality in a fictional story … if the story is good enough, and this’d one is. The visuals, though … wow. I felt like I was on a rollercoaster for an hour and a half.

More of this plz!

I got my money’s worth in the first 20 minutes, after which, this film completely and utterly failed to disappoint.

In my jerk off fantasy, Hollywood is going to see the epic reviews and big box office numbers and go “Hey, maybe we should shoveling stupid cliches and tropes into all of our movies. It appears people like them better when we don’t do that.”

Money talks. Tell all your friends they have to see this!

So Sandra Bullock is in her gym clothes while exposed to the vacuum of space? Because unless she’s in the vacuum then the ambient air of the space station conducts both sound and heat.

No, she gets out of her suit, and underneath she’s wearing gym clothes instead of water-cooled underwear.

Meh; this film has earned itself a ton of artistic license.

Yeah exactly. I’ve read reviews that claimed she was acting unrealistically, or stereotypically “feminine”, but really, nobody has ever faced what she did – the closest was the Apollo 13 astronauts, but they had Houston to tell them what to do. Yes, she maybe prepared for similar situations in simulation, but there is a big difference between simulation and reality.

Eh, it didn’t seem like she was unduly terrified to me. They make it pretty clear that she is a scientist first and foremost who happens to be on the ride because she is useful. They make it a point to mention how little training she has. Maybe I am misremembering, but the only thing she does “stupid” is panic (but still move) while she is being flung around madly… and I think that seems like a legit response. Otherwise, she is rightfully giving off the “holy shit this is scary” vibe but otherwise constantly moving. Like I said though, maybe I am misremembering.

I assume he is referring to the way the precession of Mercury and observed light bending around the sun helped prove Einstein’s General Relativity, but I’m not sure if this is best characterized as a ‘facutal’ error in astronomy.

OK, let me start off by saying, wow.

And by “wow” I mean, you must see this in an IMAX 3D theater if at all humanly possible, because it is as close as going to space (or at least orbit) as most of us are ever going to get.

Every shot is just a jaw-dropper visually, all the best shots of Earth from the STS and ISS we’ve seen over the years on various websites, suddenly and gloriously up-rezzed, reproduced, simulated and rendered with such loving grace that it feels like a love letter to the Earth.

Which is really what this movie is all about, a testament to the beauty of our planet, our relative fragility outside of its embrace, and the cold logic of Newton’s Third Law.

The rest of the movie hangs together well enough, but the script and writing seem to realize they are eclipsed by the visual impact of the movie, so they just put in their service and call it a day. Which is a shame, because the only things marring this spectacle for me was too many cringe-worthy moments where I felt they went for the formulaic route too many times.

When surrounded by such incredible realism and attention to detail, it only serves to sharpen the other aspects of the film in which those qualities are lacking. The writing/acting contrast between Bullock and Clooneys’ personalities was so extreme that Clooney almost seemed like a inflated cartoon superhero every time he was on screen, thus losing believability. And without spoilers, what the heck was up with that dream? Again, it comes down to believability, and in a film like this, I just think they could have done it better.

One more spoiler alert: The ending. WTF? A lake/sea? the odds of that landing are so astronomical (haha see what I did there?) that I was half-expecting her to get attacked by a shark or something before it was all over. It was almost getting to that point.

Overall I give it a 7.5 out of 10, CBB (Could Be Better) but indeed a remarkable cinematic effort and well worth your money to see it in an IMAX 3D Theater

I was told this anecdote by an ex-president of 20th Century Fox:

When Sony, a Japanese company, bought Columbia Pictures the executives were explaining that for every 20 movies made only 1 is hit. The Japanese spoke in Japanese to each other and then said to the movie executives. “Please only make the hits”.

The point being, at the point a movie is green lit no one has any idea if it’s going to be the next Gravity or the next Waterworld.

I won’t hold my breath. I am sure some asshole gave Michael Bay another 100 million to make another atrocious transformers movie.

Even worse, he’s taking on the classic manga Pluto (eventually) and is changing the TMNT in to aliens from another planet

I especially appreciated the Soyuz interiors. It looked like the producers had modelled the interior of a real vehicle right down to having the correct switchgear. Not many movie makers go to that amount of effort for authenticity.