Gravity - one hell of a thriller

So I just saw this in 3D, and came away mightily impressed.

I’m aware Sandra Bullock is considered by some to be the kiss of death for a movie, but it was the character she played I was annoyed by, at least until she found some gumption about 2/3 through the flick… anyway, I guess it was necessary to the story.

Clooney, as ever, was hugely charismatic, but the two leads were bit parts next to the environment 600km up and the absolutely stunning effects and nightmare scenario.

Here I was thinking CGI has taken the magic out of movie effects, but no - I’m wondering how Alfonso Cuarón and company managed to do an entire film in apparent zero-G without CG-ing the whole thing. Damn impressive.

If 3D doesn’t bug you it’s a no-brainer for this one. Felt like I’d got my money’s worth after only 20 minutes. Utterly spectacular, and I shit you not - this is easily one of the five best thrillers I’ve ever seen.

I may to try to get over my loathing of Sandra Bullock. Not watching it in 3D, mind.

This is the second rave review I’ve read for this in 3D, from people that are not prone to humoring nonsense.

I want to say it was epic and awesome… but you know.

Suffice to say I was agog from go to whoah.

In the first few minutes I was creaming my pants over the realism, and fervently hoping it inspires some proper hard SF movies… in one or two scenes I was almost in ecstasy over the sound - it was exactly as if the mike was in one of the spacesuits - all you can hear is breathing, the suit’s life support, the astronaut’s voices, and the sounds of the work they’re doing - as conducted by their suits! Fucking sweet. Physics nerds will be in raptures.

I don’t think it’d be accurate to call this a SF movie though - it’s more of an alternate history, since it includes a space shuttle in action.

Anyway, come the conclusion, I was feeling everything the folks who made this film wanted me to feel.

Never heard of Alfonso Cuarón before, but I’ll be keeping an eye out for his name… he wrote the screenplay with his brother (I presume; it’s someone who shares his surname). It seems to make for a good result when siblings collaborate in creating a movie… although I guess there could be just as many stinkers that don’t spring to mind.

Never heard of Alfonso Cuarón before

No, wait a sec - he directed Children of Men.

This guy is developing a pedigree par excellence; he can make a five-star movie starring Sandra Bullock!

…You have to admire her for at least one thing, though - how many female actors would’ve kept that surname?

Not watching it in 3D, mind.

From an IMDB review:

Gravity is the best 3D film ever. Ever.

When I don’t have to pay double the 2D price, I’ll be more interested. Or when 3D films let me focus on what I want to.

And when it comes to this movie, the only criteria should be whether you can handle 3D or not.

This experience is worth >$40. Way better value than a rollercoaster.

Reckon I should go watch it again, on acid.

That film was as excellent as this one, although close to the other end of the intensity spectrum.

In my experience anything with space involved is a must see in 3D.

Hah, the flick I just mentioned wouldn’t benefit a whole lot. Seen it?

True, but the majority of that took place on the moon… which technically isn’t space! not many gratuitous shots of planets or floating in space.

Since you said ‘technically’, Ima have to counter with the fact there’s no atmos on the moon, and you said ‘anything with space involved’ : p

Hard vacuum = space, right? There are no atoms or molecules bouncing into you. We can’t be talking outside a gravity well, but I guess you could stipulate freefall as a condition…

Hah, you’ve out technicaled me!

Since this is still open:

‘Gravity’ Fact-Check: ‘Death in Space Is a Cheerful Death’

The movie "Gravity" depicts two astronauts fighting to survive while floating in the void of space. German astronaut Ulrich Walter explains what the film got right and wrong -- and what actually happens when you puncture your spacesuit.

Thanks for the read.

I posted this before the BB article.

Typical IKEA rookies. Use the free pencils to mark your path, don’t have the meatballs and you’ll be fine.

3D lensflares are a real treat. 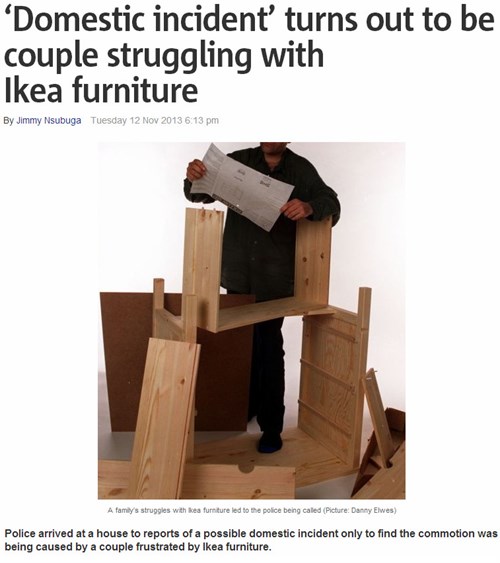 IKEA is the End of All Relationships