Yeti’s are lovers, not fighters.

I have this book! Love the cover for sure, and Brown’s stories are almost always effective on me.

Yeti’s are lovers, not fighters.

They can be both! Perhaps fighting is more of a hobby.

It doesn’t have “The House” but it does have the hilarious “Armageddon” which I recently recommended to a friend who lives in Cincinnati. He texted me a picture of a Frederic Brown book he’d just checked out of the library and asked, “Ever heard of this guy?”

I couldn’t text back fast enough how excited I was even though it had been decades since I’d picked up a Frederic Brown story. That prompted me to get Carnival Of Crime which was a fun read, although not as good as his science fiction.

I will call him George, and I will love him, and hug him, and squeeze him, and pet him, and keep him for my very own.

Wow! We had that one in our school library in the '70s. I checked it out several times. Still remember the story depicted on the cover! Good one. Always liked Brown, and Corben.

Love me some Corben art!

He looks so happy to have found a friend! It must be lonely up there above the treeline.

There’s someone who posts around here whose avatar is from the cover of Brown’s Martians Go Home!, though I think that art was from Frank Kelly Freas and not Ricard Corben.

I saw the original cover before you edited it! 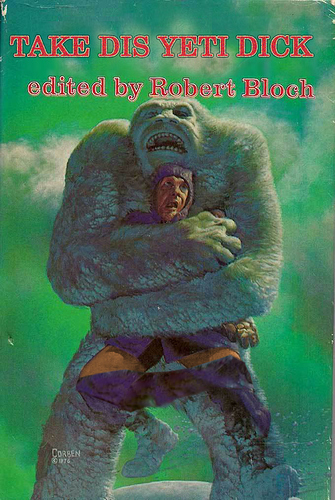 Unless you’ve read this fun story, you don’t know how right you are.

I still have this SFBC book. One of my favorites as a teen. Today Brown is mostly known for (inadvertently) contributing the story upon which Star Trek’s “Arena” (the one with the Gorn) is based. But he was a master of the short story. Wry and clever.

OH hey - I didn’t read close enough - Richard Corben did the cover. He is an indie comic god, and lives near-ish to me. I took a drawing class he was in. Supremely talented.

Just saw some of the covers. I thought Stephen King was nightmare inducing.

and lives near-ish to me

I would be afraid