Originally published at: Guy figures out what obscure hockey game was playing on the background TV in 'Gremlins' bar scene | Boing Boing

That is some great detective work and a lot of dedication by him. I don’t watch enough sports to have even the foggiest notion of who wore what jersey, or how big hockey arena sizes are.

Well, that’s a load off my mind.

This is exactly why I love the internet.

Science can always use better pattern recoginition and creative thinking, and if only the peeps on the internet who had the mad skillz to figure this stuff out, like the exact song from some obscure TV show/movie, the exact location on the planet from a single blurry photo, etc., could use their skills to find cures for diseases or other things to make the world a better place.

Who’s to say this work isn’t already making a difference?

Someone watching this may learn a new technique from him which may result in their producing a more significant outcome in a different instance.

Or what if his sleuthing skills were picked up by a researcher and fed into an AI? Recognizing colors, uniforms, styles, dates, and then applying that to photographs where sports backgrounds are visible could help automate the identifying dates and places of evidence.

There are already huge catalogs of this kind of data used in CSAM cases, where hotel room photographs are used to identify individual rooms by things like lamp styles, furniture upholstery patterns, carpeting, artwork, plumbing fixtures, etc. His work could contribute to pinning down or corroborating exact dates and times of an event.

A friend who recently retired from our investigations team used to work as an Army investigator. He examined digital cameras and photos from a particularly notorious human rights abuse event, and used cross correlation to synchronize the times between the cameras. His research proved in court that three different people were taking photos from different angles, and was able to cluster all of the conspirators together at the one event, helping result in the convictions of all of them.

Of course there are plenty of negative examples, too. The FBI used photo evidence taken during the George Floyd protests to identify individual protesters. So the techniques can be used for both good and evil.

Don’t count him out just because he posts to TikTok.

Wow, I’m glad to have been introduced to this guy’s content, as I was actually trying to research something like this back when Peacemaker came out and didn’t have any success, luckily he’s got me covered:

Reply to @markusdennison Can’t get enough of these #sports #football ... |...

I don’t know anything much about ice hockey; however, in the footage of the programmes, Averill seems to appear in both games? 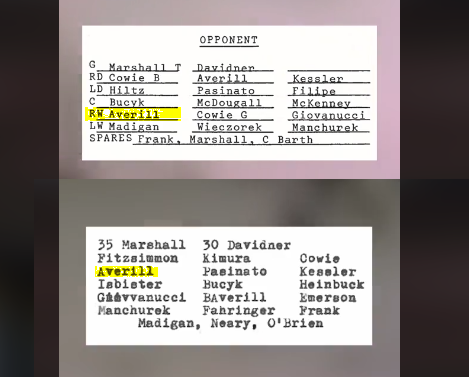 And possibly twice in the second game, if “BAverill” is a misspelling.

Edit: the top screenshot is of the line-up for the first game, and the second line-up is for the second game.

I’m sure he could look into it deeper, but it isn’t that uncommon for brothers to play on the same college team. (Especially at a smaller school.)

“Averill” is likely the older brother, with a younger “William” (or Bill) joining the team later. Most players won’t have their first initial on their uniform, so the second player would have the initial added to their jersey to differentiate them on the ice.

TikTok embeds on BB have never worked for me and I don’t have the app to click out somewhere and find it. Can someone summarize how he did this so I don’t have to find a way to watch a platform that I never want to touch?

The detective worked out which teams were playing by looking through the uniforms of several leagues in the appropriate time period.

Once he found the teams, he was able to identify the stadium by the doors visible at the end of the rink, behind the goal.

This gave him the venue and a spread of dates when those two teams played there.

Finally, he looked for players who wore the #13 strip, this allowed him to reduce the possible dates down further.

I’m not certain that his working out adds up, as the name he mentions appears in both of this final two suspect games

Don’t count him out just because he posts to TikTok

Here it is on TikTok. I don’t have an account and I was able to watch it in a browser without the app.

Here’s his YouTube channel, the video is not posted there yet but he does have a few like the one in this post and he explains how he does it. 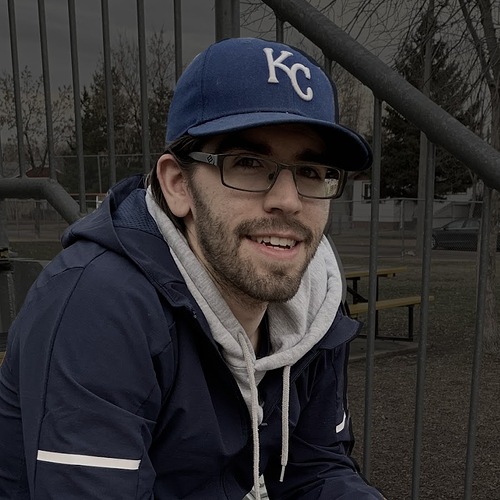 Share your videos with friends, family, and the world

I would like to go on the record to say I always look for TikTok videos I want to post on YouTube because I’m aware it’s a hassle. This guy has a YouTube page but hasn’t posted this one there yet.

The detective worked out…

That’s pretty amazing. Thanks for the summary! Much appreciated.

Thank you! We appreciate you.

. I don’t know why the TikTok embeds specifically don’t work for me on BB, but I’m happy to not have to install Chinese government spyware on anything I own. If there’s no alternative, I’ll go on with my life without seeing the content (even though sometimes I really want to see what the adorbs doggo did

That was a great summary @euansmith !