"Why does the radio play the same songs over and over"!

Perception is everything. Even space.

Time is an illusion, lunchtime doubly so.

This is one of the difficult storytelling issues in any “choose your own camera angle” medium.

difficult storytelling issues in any “choose your own camera angle” medium.

I never really thought of it that way, but that’s a valid point. I suppose that is why so many video games make cutscenes part of the narrative for anything that is important. I don’t know how many times I have missed a door in a dungeon or didn’t find the right person in a room to talk to in order to advance the plot because the camera angles never clued me in.

I suppose VR is going to make this even more of an issue.

I can tell you from personal experience that 360° shooting is also a massive challenge. We went in for a shoot with one of our puppeteers at one point, and she surprised the cast by springing on us that the camera guy wanted to shoot in 360° with a ball of GoPros. None of us is the kind of puppeteer who needs to be behind one of those stupid little stage things, so puppets weren’t the problem. But if you know anything at all about directing or editing, you know you’re constantly working against people’s weird expressions, that one bad line, or that one weak delivery, trying to keep them off camera and deliver the audience’s attention seamlessly to the story.

I asked the camera guy what his plan was for editing, and he said he was just going to do it in one take. That still didn’t account for the fact that we were shooting in the round. Where a traditional film would zoom tight on the focal character’s face, or where there would be a two-camera setup on TV, here the viewer would have the opportunity to go look at pretty much anyone else while that character was talking. I don’t think we’ve collectively developed a perfect visual language for shooting in 360° yet – you’re right about video games, Ben, there’s a lot of tension between on-rails dragging the player through cut scenes versus letting the player explore. And sometimes it means you can go stare at something that isn’t narratively important, which leads to the kind of hilarity Birgirpall exploits to excellent effect.

tl;dr: anyone who 1) springs 360° shooting on you and 2) pretends like he’s mastered a brand-new medium which hasn’t had time to develop a visual language yet is a liar. Our poor puppeteer wasted a significant amount of her budget renting a space and paying for that pointless setup, for a bunch of weak-looking footage where everyone was effectively in a theater-in-the-round loose shot.

So periodically, youtube embeds do this thing where they load with completely unrelated content. It happened just now, and I felt the need to share this little bit of my universe’s weirdness with the rest of you. Instead of hacker puppets, I got… The Hambone Kneeslap. It’s actually worth watching!

I always thought Working Girl had a horrible last shot because instead of dropping the camera as it pulls out to make her position a soaring achievement the director pulls straight out, placing her in a rat race grid. I was young when I saw it(and I haven’t seen it since) so apparently I only half got it. In looking for some photos to illustrate my point I came across this Guardian blog which says:

"The final scene, an unsettling counterpart to the sunlit beginning, is where Nichols’s scepticism hoves into view again. Having been convinced of her guts and determination, Trask has given Tess an office and a secretary, everything she has dreamed of all along. With the door closed behind her, she calls Cyn and bursts out: “Guess where I am?” An exterior shot slowly zooms out to reveal her window as one of a grid of nine, then 25, then 49, then 81. She is a unit in the machine of profit and loss, more worker ant than romantic heroine. "

So I guess it was intentional? 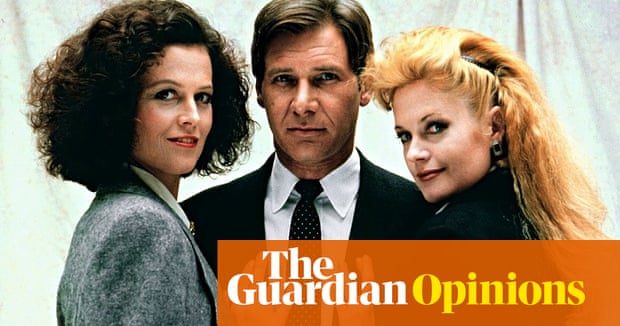 David Shariatmadari: The late Mike Nichols’s fairytale of an ambitious woman in 80s Manhattan is undeniably fun, but it is also a more genuine portrait of ruthless business cut-and-thrust than Oliver Stone’s Wall Street

I think it is far more interesting to encourage each person to perceive what is presented in their own way. This maximizes possibilities and creates more interesting relationships. As contrasted to each viewer framing things the same way, creating redundancy. It might be a bit “existentialist” of me, but I think that as an artist, the best you can hope for is to help the viewer to better understand their own perceptions. Others experiences can help to inform their perceptions, but ultimately their subjectivity is what they have to work with. This is not really a “guided” process. I think that modern/post-modern media is largely focused upon subverting the subjective, hence the desire to develop formulaic media with the pretense of delivering uniform experience which they hope can be consumed with predictable results.

Formalisms save time and money.

They certainly can, but any measure of efficiency depends entirely upon what one’s goals are in the first place. Truly artistic formalisms are still the subjective business of the creator, and cannot be directly communicated. I suspect that those who deny this have goals which don’t involve any sort of art, and so are in the wrong “business”.

Truly artistic formalisms are still the subjective business of the creator, and cannot be directly communicated.

It helps if you can write it down in the script.

Camera angle makes all the difference. When the camera was at just the right angle an attractive woman appeared.