Here are some words that don't exist in English but should

Originally published at: Here are some words that don't exist in English but should | Boing Boing

Gigi is Tagolog for the feeling you get when something is so cute you want to squeeze it.

Years ago after learning it, I started using the Spanish term “nervio”, which conveys the same concept.

My favorite of these is Schnapsidee. " A Schnapsidee literally means a “booze idea” and is a term commonly used to indicate that an idea sounds crazy, useless, or completely foolish."
Word of the Week: Schnapsidee | Culture | Arts, music and lifestyle reporting from Germany | DW | 26.09.2016.

ETA: Nope, just watched that part of the video. I was pronouncing it right!

I stumbled across a Japanese word, yoisho - よいしょ- which, as I understand it, translates as “slumping in a chair after a big exertion.”

Cute aggression, or playful aggression, is superficially aggressive behaviour caused by seeing something cute, such as a human baby or young animal. People experiencing cute aggression may grit their teeth, clench their fists, or feel the urge to bite, pinch, and squeeze something they consider cute. The first research into cute aggression was led by Oriana Aragón.[A] The term "cute aggression" was published widely in 2013, after Rebecca Dyer and Aragón presented their team's early research on t...

That’s so adorable I just want to eat it up!

Tell me about the rabbits, Dyer, Aragón, et al.

There’s always this “dictionary of things that there aren’t any words for” courtesy of Douglas Adams and John Lloyd
. 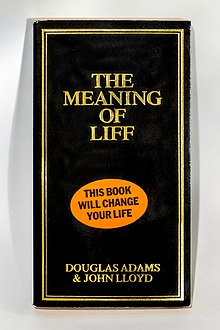 The Meaning of Liff

The Meaning of Liff (UK Edition: ISBN 0-330-28121-6, US Edition: ISBN 0-517-55347-3) is a humorous dictionary of toponymy and etymology, written by Douglas Adams and John Lloyd, published in the United Kingdom in 1983 and the United States in 1984. The book is a "dictionary of things that there aren't any words for yet". Rather than inventing new words, Adams and Lloyd picked a number of existing place-names and assigned interesting meanings to them, meanings that can be regarded as on the ve...

I have thought it unfortunate that English uses the word “spicy” or worse “hot” to refer to both “pepper-y” and “horse radish-y” which are quite distinct sensations.

Many of these words are perfectly cromulent.

The Korean word ib-i simsimhada means that you want to eat something not because you are hungry but because your mouth is bored.

We have a very similar word in Japanese: 口寂しい (kuchi sabishii), which literally means “mouth lonely.” It’s also used for like when someone smokes a cigarette or chews on a pencil just to have something in their mouth.

Unlike the Korean word (which is a verb), the Japanese is an adjective describing the state of just wanting to have something in one’s mouth, whether it be food or something else.

Alongside that there’s now the Dictionary of Obscure Sorrows (book and site) which is beautiful, poetic and erudite and … like the title says.