They have an interesting relationship dynamic.

I love how they both have gloves, safety glasses, talk about safety all the time - and then you see the camera guy with no glasses and no gloves stick his lens and face straight over that blender.

That the biggest overreaction to the appearance of fog that I can possibly imagine.

no glasses and no gloves

And with the amount of liquid nitrogen that guy had, its the asphyxiation that is the real danger.

Using liquid nitrogen to reconstitute melted ice cream is silly. You can make your own ice cream by just mixing the ingredients and then stirring in liquid nitrogen. Which could be a lot better than what looks like maybe post-takeover Breyers they had.

No surprise that it’s his job to explain things, nor that hers is to reply “Oh!” and get over-excited sometimes.

“Let her speak, please!” That’s what a member of the audience yelled at last weekend’s World Science Festival in New York during a panel on "Pondering the Imponderables: The Biggest Questions of Cosmology." Video of the incident has since gone viral,...

So the guy is the knowledgeable level-headed half, and she’s the hysterical accessory?

And with the amount of liquid nitrogen that guy had, its the asphyxiation that is the real danger.

Nope. You need much much greater volumes for asphyxiation to be an issue.

In other words, evaporating everything in cup increases the total gas volume from 49000 L to 49350 L, and the O2 percentage in the room drops from 21% to about 20.85%. Which is nothing. You suffer a greater decrease in O2 partial pressure by climbing a 500 foot hill.

I love how they both have gloves, safety glasses, talk about safety all the time

With liquid nitrogen, those gloves are quite literally worse than useless.

If you small amounts of liquid nitrogen onto your skin, it evapourates before ever touching you, it just creates a cushion of suddenly expanding gas between your skin and the liquid. You can dip your fingers into the liquid for a short moment, nitrogen never touches you. The difference in temperature between you and the liquid is over 230°C; it’s like pouring boiling water onto a frying pan at 330°.

Crappy thin black nitrile gloves, like the ones they are wearing in this video, don’t protect you from liquid nitrogen. They are worse than nothing, because they will trap the nitrogen and freeze and hold it against your skin for long enough to do serious damage. You need big thick multilayer cloth gloves that a small spill can’t penetrate and cool down enough to harm you, and that will buy you enough time to rip off and throw away in a big spill.

Also, those aren’t safety goggles, or even safety glasses. Those are sunglasses. Better than nothing, but not much.

How much liquid N2 was in that first styrofoam cup?

I’m talking about this thing! He said it took three weeks to make. 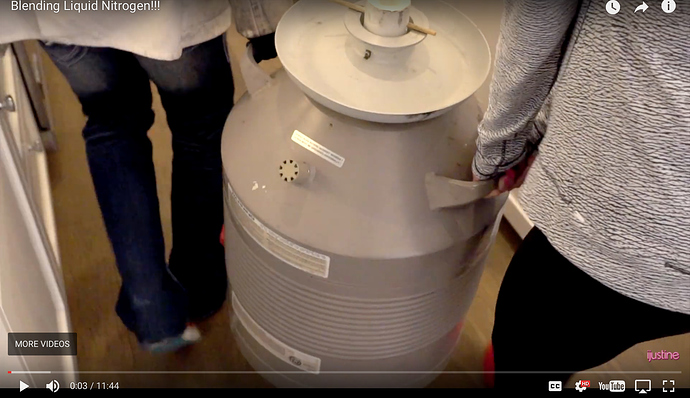 So the guy is the knowledgeable level-headed half, and she’s the hysterical accessory?

Wouldn’t it be cool for once to have it the other way around?

This video did nothing except make me sad.

I’m talking about this thing! He said it took three weeks to make.

Oh! Yeah, ok, that looks like about 20 L. If you dumped all of that out on the floor all at once, in a sealed room, I could see that being cause for concern. Not an “everybody dies” scenario, but maybe a “we should all leave the room for a while and if you’re not quick about it you might get dizzy and fall over” scenario.

Did he make his own liquid N2 generator or something? Sound like a hassle. It’s not like liquid nitrogen is a rare or precious commodity. My local gas supplier would fill that dewar for maybe $30.

They’re like the Regis and Cathy Lee of lost fingers and blown up kitchens.

Yeah, but what if you’re wrong, and the room is actually 12" on a side?!? That’s a very common mistake, you know!