So much for the theory that, at least in this case, vinyl has a wider spectrum than digital: 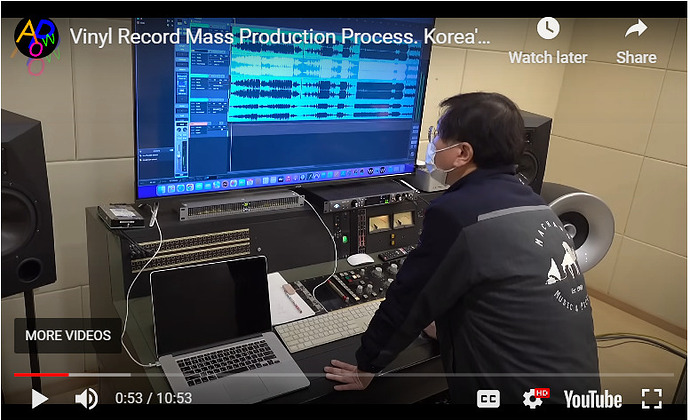 Still though, I’m a firm believer that perception is reality. Especially when it comes to gorgeous blue vinyl.

I just hope this means I might be able to get pressing done either cheaper or quicker than in the US, since almost every plant is months behind schedule, or charges twice as much to get it done fast.

Although it was enjoyable to watch, it could have been enhanced with a narration of why particular steps were being done. I’m probably spoiled by How It’s Made.

It was surprising how much of a manual process that was.

So much for the theory that, at least in this case, vinyl has a wider spectrum than digital:

Gotta get yourself one of those Edison Home Phonographs. 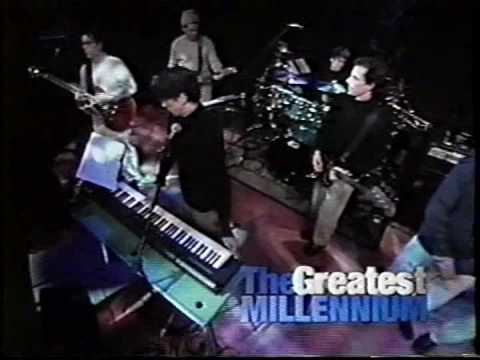 It’s such an involved process! Lacquer, master, mother, stamper. I kept flashing back to the process they use to make giant telescope mirrors at the U of A, with all the spinning and cleaning and etching and coating.

I just hope this means I might be able to get pressing done either cheaper or quicker than in the US, since almost every plant is months behind schedule, or charges twice as much to get it done fast.

This is the only vinyl pressing plant in South Korea, so they could be very busy themselves.

By the way, there seem to be several Korean manufacturing process channels on YouTube, which title their videos in the same way and might well be run by the same people. Someone somewhere has probably done a deep dive into the economics of this microgenre.

It looked like most of the manual work involved making the master discs. In spite of the metal master and still soft vinyl, I wonder if the masters are limited as far as pressings before new masters are made for the next batch of vinyls.

There’s a Wikipedia article which points out while pressings were originally done with the negative master, the mass production method produces stampers which are then used in the presses to make vinyl records. This is in the OP’s video, but I needed a second watch to realize those steps were included.

r/vinyl - Approximately how many pressings are done with a particular stamper...

Our unofficial motto is “run it till it dies” inre stampers. That being said, “till it dies” does not usually make it much past 1000 records. We consider any stamper that still turns out a quality record after 1700 presses a “miracle stamper.”

Update: we pulled off a miracle stamper tonight! Tribe Called Quest’s “midnight marauders” ran over 2500 copies on an A/B set before we pulled it with negligible noise besides the DJ’s samples.

Yeah, that belt sander throwing grit everywhere. Anyway, all that effort, and he drops the needle into the middle of a track of some scratchy hundred year-old song.

I imagine that the video producer deliberately used a recording that was out of copyright instead of whatever the plant was really working on.

Just taking this opportunity to post a photo I took just yesterday, on a private tour of Sam Phillips studio in Memphis: This antique (and no longer functional) Neumann lathe that was used to cut Booker T and the MGs’ “Green Onions” – 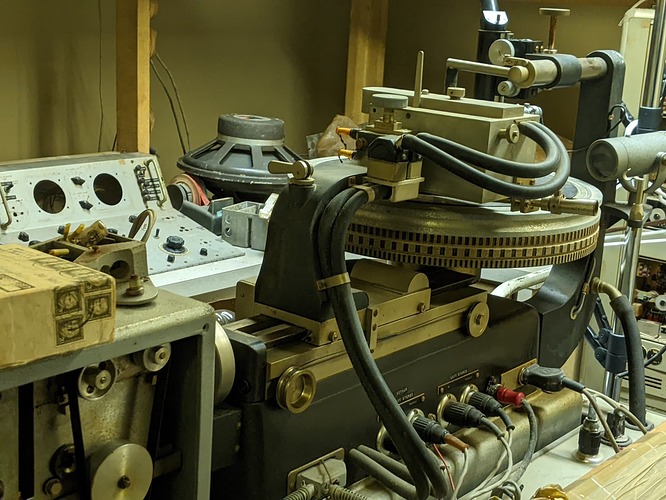 Then there was the guy with the watch. A professional car detailer once told me that if he ever caught one of his people wearing an exposed watch or ring while working a car, he’d fire them. They can scratch, see.