Thats true but its like in many cases you can just smash a window, but it makes noise and gives you no deniability. This is true for hammers and bolt cutters but torx screwdrivers are not traditional house breaking tools.

Any lock can be broken, but at least it should be obvious that somebody broke the lock.

Not just any screwdriver, but one with a star bit.

Locks are usually not temporally transitory. The lock will still be there when you come back from Home Depot with the right screwdriver.

Should be easy enough to wreck the screw heads, though…

…but fundamentally the problem with all locks of this type is the need to allow access for a potential battery change.

To be fair, I do know people for whom having to use a screwdriver represents an insurmountable obstacle.
Because there isn’t an app for that.

We live in the age of “good enough”. I am afraid that there enough people who will gleefully continue to buy and use these sort of things confident that an casual tieff would also be dumb enough to be thwarted by such a device.

I just bought half of dozen of them on the BoingBoing store!

The lock is also irrelevant to anyone with no desire to get to the locked up location/item, so that right there is another big group of people who this lock can best.

There is a place for security by obscurity, especially for things that are only left for a little while. I secured components onto my bike by using fasteners that require tools a thief would have no reason to carry. I secured my car stereo system in the same way, using a variety of different headed screws. Physical security is similar to outrunning bears. You just have to be faster than the tasty human standing next to you, not faster than the bear.

Of course having said all that, the purpose of a lock is to get a higher level of security than simple obscurity, so this is a no go. Most digital locks seem to have old fashioned keyways as backup, which is a simple solution to dead batteries.

I thought the headline was a joke.

The headline is not a joke.

They will be soon… 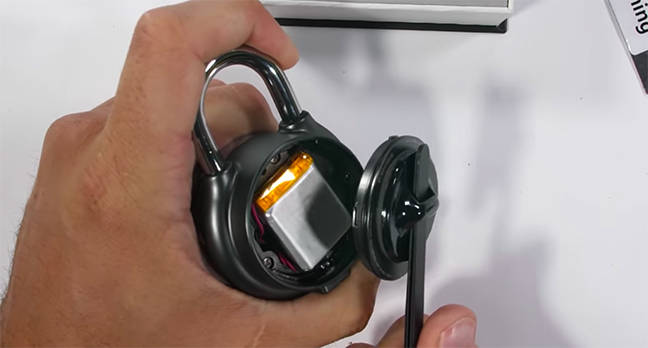 Why don’t they just round out the screws once they are in? It’s what any sensible person does to latches/hasps, for example where they secure outdoor gates/sheds, etc.