Originally published at: Hiker near Los Angeles stands her ground when she comes face to face with a bear (video) | Boing Boing

Tagged, too, from that left ear.

“Ohhhh-kayyyy… You’re not the person who tagged me, are you? Don’t think so. I’m just gonna skooch by here… Alrighty then, let’s just mosey along, and… Hey! Are you following me?? Crap! Probably wants to tag me again! I’m outta here!!”

Know that if I was in Montana or anywhere else in the world, I most definitely would NOT be standing there letting it pass.

As someone who has NOT gone through bear training (but often spends time in NY-area places where the bear population seems to be exploding), what is different about California bears that makes them more chill than bears in Montana or anywhere-else-in-the-world (which presumably includes my area)?

And WTF are you supposed to do on a narrow trail like that when a bear comes moseying down the way?

what is different about California bears that makes them more chill than bears in Montana or anywhere-else-in-the-world (which presumably includes my area)?

For starters Montana still has Grizzly bears, which are far more likely to attack humans than Black bears.

For starters Montana still has Grizzly bears, which are far more likely to attack humans than Black bears.

The National Park Rangers are advising hikers in Glacier National Park and other Rocky Mountain parks to be alert for bears and take extra precautions to avoid an encounter.
They advise park visitors to wear little bells on their clothes so they make noise when hiking. The bell noise allows bears to hear them coming from a distance and not be startled by a hiker accidentally sneaking up on them. This might cause a bear to charge.

Visitors should also carry a pepper spray can just in case a bear is encountered. Spraying the pepper into the air will irritate the bear’s sensitive nose and it will run away.
It is also a good idea to keep an eye out for fresh bear scat so you have an idea if bears are in the area. People should be able to recognize the difference between black bear and grizzly bear scat.
Black bear droppings are smaller and often contain berries, leaves, and possibly bits of fur. Grizzly bear droppings tend to contain small bells and smell of pepper.

No joke though, there actually was a big pile of bear scat on the sidewalk in front of my next-door neighbor last week. Unfortunately it looked like the poor thing was having a bit of looseness from whatever unhealthy junk food it had gotten out of a trash can. Or maybe it had just eaten a lot of avocados, which the local bears are known to be fond of.

The bear ran away once past the hikers, but during the lead-up…

Her insta also says she’s an MMA fighter, so probably some steel in those nerves

Yeah, it’s cool. Brown bears ain’t gonna do shit. All cool. Be cool.
Oh…he’s gone? Let’s get the fuck out of here before he comes back and changes his mind.

If I’d been the hiker, the stench of my terror loosened bowels would have probably scared the bear off.

Or maybe it had just eaten a lot of avocados, which the local bears are known to be fond of. 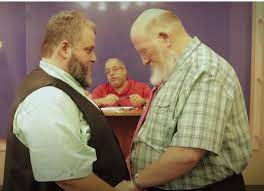 Just a couple of trail walkers passing each other. “Hey,” “hey.”

I’ll take the bear encounter any day over the hikers that bring bluetooth speakers.

“Dinner bells” from the grizzly’s perspective.

This is an awesome encounter, something special. And good on her for having those steel nerves!

And WTF are you supposed to do on a narrow trail like that when a bear comes moseying down the way?

Black bears are not aggressive and want nothing to do with people. The correct action is to make a lot of noise and scare them off. I did this on a trail two weeks ago. Carry an air horn on trails for the purpose, but yelling or banging hiking poles together works just as well.

Grizzlies are a different story. In the very unlikely event you encounter one, fight for your life. It’s your only option.

The only explanation I can see for this bear behaving this way is that it is overly-accustomed to people. People have probably been feeding it and someday it will have to be destroyed because wild animals always become dangerous when accustomed to us.