What a spectacularly spot on parody! Moore’s and Cook’s pantomime is hilarious! SNL can learn something or two from this skit alone.

Love this, the only inaccurate parts are the model shots. Those were always amazing in Century 21 productions.

And hand and feet close ups (shots of feet walking); those were always real hands and feet, which even as a 5 year old I found weird.

The Mysteron Head Explosion was far more destructive than the Scanners’ one.

What a spectacularly spot on parody! Moore’s and Cook’s pantomime is hilarious! SNL can learn something or two from this skit alone.

They had the opportunity. Moore and Cook as a duo were guest hosts during SNL’s first season.

ETA: I’ve been watching all the Gerry Anderson stuff recently, and I have to say Dudley has the marionette movements down perfect.

I find it amusing that Master Spy undermines his own reputation with his constant attention-seeking behavior.

And the best dialogue I’ve heard comes from Joe 90 (IIRC)…“Let us out of here at once! We’re British!”

I don’t think we got Joe 90 in Boston. What was it about?

Basically, “Hey, let’s temporarily transplant the knowledge of X expert into my son’s brain here and send him out on life-endangering missions!” 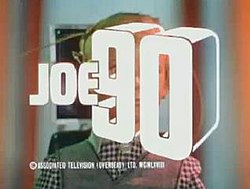 Joe 90 is a 1968–1969 British science-fiction television series created by Gerry and Sylvia Anderson and filmed by their production company, Century 21, for ITC Entertainment. It follows the exploits of nine-year-old schoolboy Joe McClaine, who becomes a spy after his adoptive father invents a device capable of recording expert knowledge and experience and transferring it to another human brain. Armed with the skills of the world's top academic and military minds, Joe is recruited by the Worl...