…Yup! It looks like you can associate mental illness with just about any social ill we have a name for, and make it seem like it’s the kind of problem that normal people shouldn’t really ever have to think about. Usually I notice this whenever the red team/GOP is shrugging off another shooting. Since it’s mentally ill people that the story is really about, there’s nothing to be done. Homelessness is the same way.

It’s another way of implying that this is a social problem we can never really hope to solve, so by imagining its victims as all mentally ill, we can keep it at a safe distance from our real selves.

My home town. Last year or so, before the mayor tried to sweep the homeless out of Seattle by stealing their belongings and putting up fences, I remember driving north on I-5 and being stunned by all the tents everywhere.

Then I noticed those gentrifying neighborhoods with the $2500 one bedroom apartments were trying to get the homeless out of downtown.

A few months ago I drove past a truck from the city. They were taking homeless people’s tents, sleeping bags, and belongings and chucking it all in to go to the dump. I’ve never been so mad.

The Seattlish has some good coverage on this, because not many other outlets seem to care. Our city council recently rebelled and got the mayor to slow the fuck down.

I get tired of hearing how the cops are scared of the homeless. I was a psych nurse in locked psych units in the area. Same demographic. We didn’t get weapons and armor, and did just fine. As did the case workers, and out reach staff.

Last I heard the mayor wanted to build fences for an astronomical cost (initial and yearly upkeep) instead of shelters.

Outside the Amazon headquarters was a covered wooden stand with two people giving out free bananas. When I asked them what they were doing, they said, “It’s a PR thing.” I asked what the message was, and they told me about the good features of the banana, and that it kind of looked like an Amazon logo.

“Just look at it,” one of the reps said. 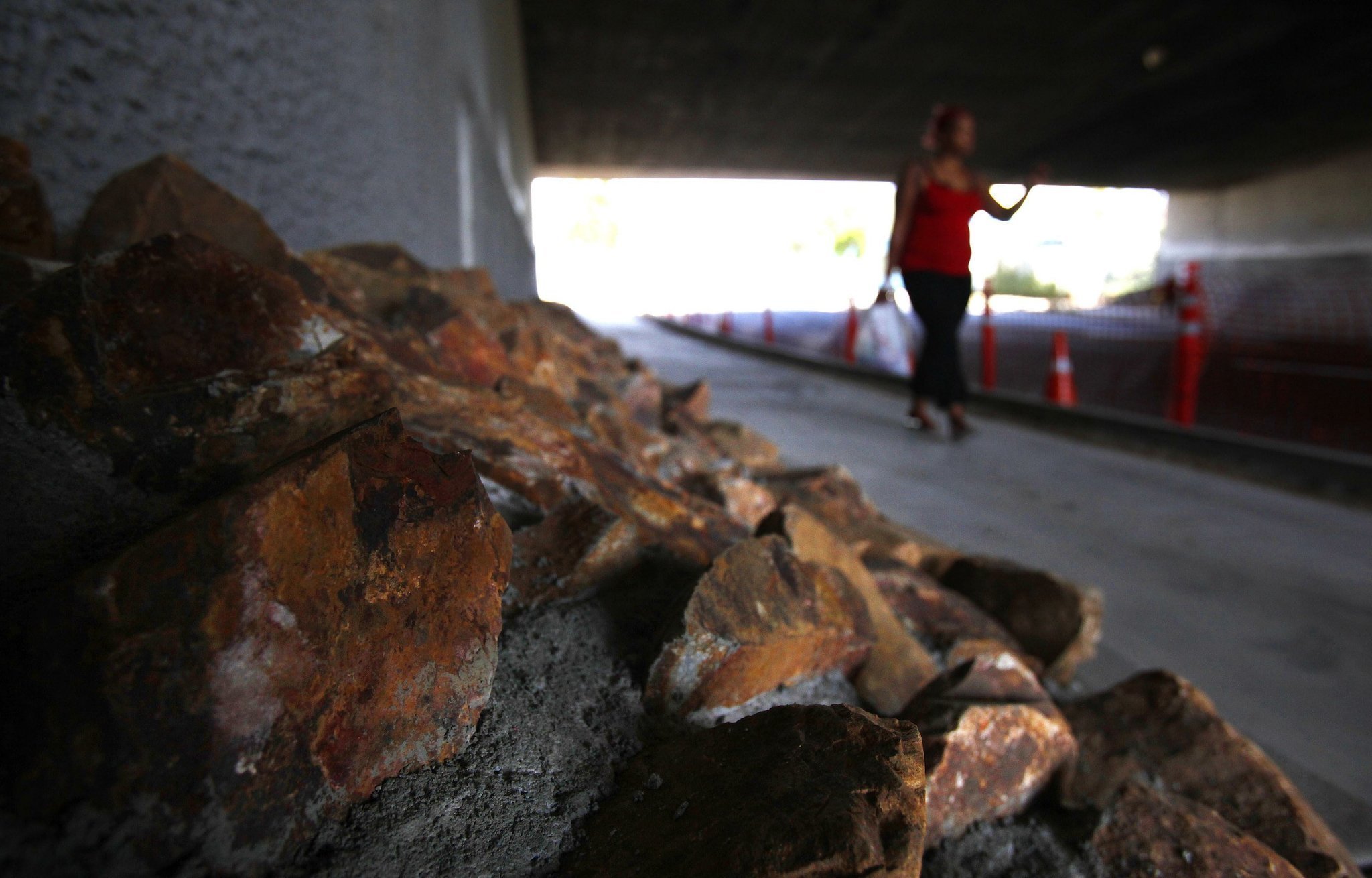 Rocks to oust homeless were about baseball, not neighbors

In late April, after jagged rocks were installed along a freeway underpass to drive out homeless encampments, a city spokesman told reporters the project was at the request of residents of Sherman Heights, a working-class neighborhood just east of...

Rents go up, wages stay the same. The rich get richer and the poor get poorer. I hope to not be alive when we reach the breaking point.

If it were me and I was spiteful, I would scatter dog kibble between the rocks to encourage this place to be home to the largest rodent colony. The city would then be forced to remove these rocks at their own expense by the public health authorities.

Sometimes cleaning up a mess entails making a bigger mess in the interim.

There will only be more homeless people in the future, the professor said. More and more people will find themselves unable or unwilling to go along with the program. They too will be surplus, and society will eventually look for a place to store them, like refugee camps, or prisons, because they will become numerous and it will become a big problem.

Sometimes cleaning up a mess entails making a bigger mess in the interim.

How is the “Housing First” movement more than a giant real estate developer welfare program?

Oops, sorry. I meant to ask how is the “Housing First” movement more than another giant real estate developer welfare program?

And instead of coordinating safe supportive services to people in the camps, the unsheltered people there are driven out and dispersed.

From the third essay:

When I spoke to the homeless people, though, it was never a big trend that put them on the street, it was something small, or a collection of small things that finally did it. Maybe they said the wrong thing in a relationship, they had one too many fights, and it ended, and they got kicked out. Maybe they got sick, and lost a job, and couldn’t afford medication, or became addicted to it. It was never an earthquake that did it. It was a slight gust of wind.

That is the scariest bit.

It’s not people who gamble away their money, or get their money stolen from them, or their mortgage went underwater, or any of those things. It’s just normal people who hit a patch of ice in the road and are into the guardrail before they have time to react.

I don’t have a solution, but a suggestion. As the articles pointed out, there are many different problems, so perhaps triage is in order. The homeless could be divided into those just needing help to re-enter society, even if it means relocation to places with affordable housing, those needing institutionalization for severe mental problems and a third category for the ones needing skill retraining to re-enter the work force. The idea there are no jobs is an insult to the many having a second or even third job to make ends meet.
Triage requires great resources and no possible on a local level. Currently, the political will doesn’t exist to enable this.

That’s a great start to raising the question of how best to reduce the risks of further harm.

Subject slumlords to fines, civil forfeiture and incarceration for the negligent acts and omissions of their agents. Impose rent controls.

I’d vote for all of those provisions today.

In the 1980s the republicans disassembled the federal mental health programs. By some estimates 500,000 patients were turfed out.
The closed facilities have never reopened. The lost beds and role of the caregivers have been handed off to charities running shelters. (God bless the Church Ladies, but they are not psychologists. And any one of them will gladly tell you they are overwhelmed.)
Mental Illness is the fucking problem. The greed pigs of the Me Generation snorted up the safety net. And the greed pig crooked investors of the Great Recession are just keeping the party rolling.