The only problem represented with that picture is power. In the first one the green is the phone which obviously gets its power from the battery. The digital setup has the DAC/amp powered by nothing which obviously doesn’t work. Sure in a bluetooth configuration it’s fine, but I’m quite happy with my corded setup. Besides would this mean the end of the Apple white ear buds or would they go wireless as well?

Power was just assumed on my part (I made the diagram). There’s no real difference in the setup but layout, and additional compromises mean moving the DAC/amp away from the mainboard to where it’s more vulnerable to failure, more likely to be compromised in quality, adding more bulk to headphones and so on. It’s a bullshit move on Apple’s part.

Cory, are you really not aware that Apple removed DRM from all their music on iTunes years ago after fighting the Music Industry for years to do that?

Fast Company’s Mark Sullivan asked me to explain what could happen if Apple went through with its rumored plans to ship a phone with no analog sound outputs, only digital ones – what kind of DRM badness might we expect to emerge?

Next from Mark Sullivan:

I can see how getting rid of an analog output could pave the way to DRM (right now deactivating analog output for certain media would affect too many users; when most of them have DRM enabled headphones, this could change). But I see no indication whatsoever that Apple is planing on doing so. I think a fair article should highlight that (it’s like suggesting that increasing gun control would “open the door” for the government to suppress its people without offering any other indication that they might want to do so.)

Remember blue-ray? It is often cited that one of the main reasons Apple doesn’t include blue-ray capabilities into their products is because the DRM would be too invasive. They would need to change the operating system so it wasn’t possible anymore to record the screen in certain situations, which they weren’t interested in doing.

And lastly, hardly anybody does analog copies of music anymore since the late 90ies. iOS supports USB audio adapters which still could be used to make lossless digital copies, if anyone wanted to.

great real benefits of having a digital audio connection on a device. ::

What are they? Honest question.

They’re doing this because people who actually use their iPhones to listen to music do so wirelessly.

out in the open (Sonos) or over bluetooth headphones. Apple is a consumer products company, so it’s completely sensible for them to be building what makes sense for the majority of their consumers,

Citations please (that all who listen to music on iPhone do so wirelessly and that a majority of Apple customers want analog out to disappear). Millions of wired headphones sold annually. I am not looking forward to more points of hassle and failure in what should be a simple system. I listen to music with wired headphones for sound quality/no extra batteries, protocols, connections, incompatibility, hassle. More technology should be justified with some type of benefit. But more importantly, if it works well, and everyone has the options they need at the moment already, I’ll stay skeptical.

It’s pretty easy to Google, but here you go anyway.

Despite criticism, it appears that Apple’s decision to drop the 3.5mm headphone jack might at least be well-timed. According to NPD, Bluetooth wireless headphones exceeded sales revenue of th…

Randell monroe seems to see the trend going the other way. 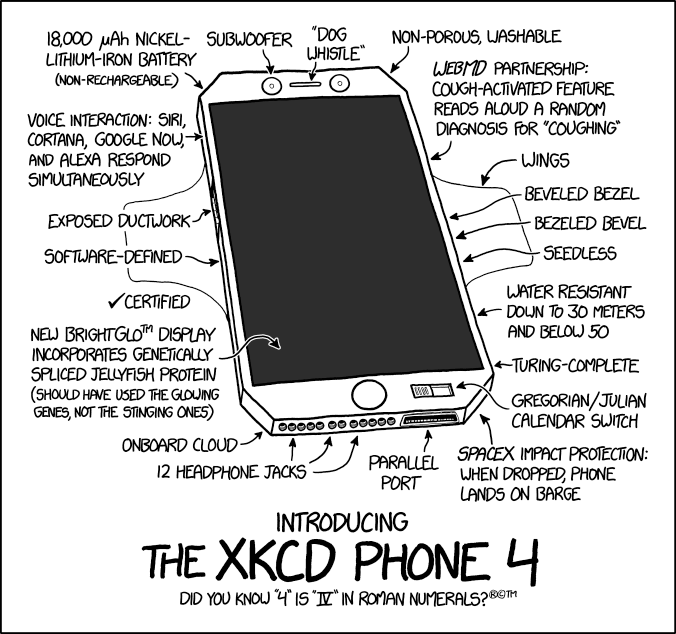 The SpaceX system carefully guides falling phones down to the surface, a process which the phones increasingly often survive without exploding.

Digital only outputs just open up the possibility of an equivalent to HDCP for audio devices, which doesn’t make sense if the file itself is DRM free. And the DRM free nature of modern music sales is because of public pressure for what Cory describes to not happen, not because people could just bypass it with the analog hole.

Right, but even then there is an analog signal coming out of the DAC to drive the speakers.

Yeah, but then you have to start modifying the headphones to record audio, which apart from being seen as black magic by the sort of people who have these ideas (“We put a Warranty Void sticker on it! They can’t get through that!”) would still leave you without the analog signal designed to convey the audio between appliances and leave you only with the final waveform specifically for the speakers, which would likely yield lower quality rips. Of course, all of this ignores the part where the weakest link in the hypothetical DRM chain is the fact that the upstream audio file itself isn’t DRMed in the first place, and the fact that, as nasty as the RIAA are about things like ContentID, even they can appreciate the fact that their profits improved rather than plummeted since that change.

I’m unaware of a DAC that outputs waveforms specifically designed to output to a speaker type.