How a Pythagoras Cup works

But what was thinking of is a currency that actively resists hoarding.

Plutonium-239 is perfect for your needs. Hoarders can be easily found by looking for the mushroom clouds.

I was pondering on this very same thing earlier and there is a fix for that. The mug/cup can have a false base/cover that creates a buffer for the hole and has more openings to the outside… there are a few different ways to design it that i’ve thought of but they’d all functionally make it impossible for someone to easily cover the hole.

So why does the liquid continue to empty after the cup has been filled to a certain point? Does it have to do with turbulence in the “u-tube”?

It’s a siphon; by filling it past a certain point, you’re priming the siphon.

I am not sure what either of you are getting at, either because I am slow or trying to multitask now. But what was thinking of is a currency that actively resists hoarding.

Just a joke about the finite amount of gold one can butt smuggle. Incidentally, Butt Smuggle is the name of my next Village People cover band.

I like @the_borderer’s idea, but it’s actually pretty difficult to get even highly refined Plutonium-239 to make a large explosion. Without the bomb mechanism to implode it, a critical mass will spontaneously explode, but will quickly disperse until the chain reaction is no longer sustained, long before sufficient explosive yield to create a mushroom cloud. However, you could measure someone’s wealth in how quickly they died of radiation poisoning

I think I read about it from Charles Stross.

I love Charlie’s books. I’m sure he’s used that for some brilliant plot mechanism somewhere. I feel like there was an H-bomb in The Atrocity Archives, but it’s been a while since I read that one.

I actually meant to ask what the mechanism is that causes the siphon to continue to pull water up from the bottom of the cup.

Looks like it’s actually a quite complex issue, and may be caused by either the pressure differential created by the water flowing down through the bottom of the siphon, or if the siphon works in a vacuum, something called the “chain model” involving the tensile strength of the liquid.

Just to point out the YouTube channel “Periodic Videos” is not Poliakoff channel, is actually one the channels run by Brady Haran, including the marvelous Numberphile. Polakoff is just the tame chemist who appears in most of the video.

Geez, it’s just the same principle as a flush toilet

Auto-flush in urinals, actually. Most modern toilets use flap valves.

i always thought of him more as the chemistry Stig.

The mercury-and-water trick should work with any two liquids where the first-poured one is much denser than the second-poured one, no? So if someone used, say, thickish honey instead of mercury, they could top up with wine and still not poison themselves. Sweet wine was more popular in ancient times anyhow.

Making a working one of these is… difficult. So many things can go wrong, one little crack, or a small break where air can escape and it won’t work. I have yet to make one that truly functions as it is meant to. You also can’t test the seal and width of the channel before completing the structure of the piece.

While looking through my ceramic photos I also came across some of a more recent piece that didn’t turn out to my expectations and thus was left incomplete (I decided not to glaze fire it, as you can clearly see). If anyone wants an explanation on what is/what it was meant to do just ask and I’ll do my best to explain it. 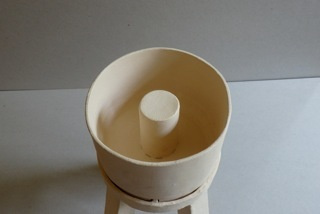 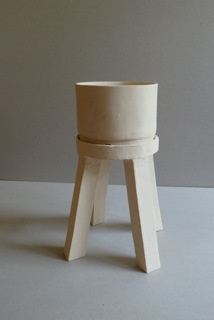 The mercury-and-water trick should work with any two liquids where the first-poured one is much denser than the second-poured one, no? So if someone used, say, thickish honey instead of mercury, they could top up with wine and still not poison themselves. Sweet wine was more popular in ancient times anyhow.

So, who’s drinking all that Mad Dog?

So if someone used, say, thickish honey instead of mercury, they could top up with wine

The density of honey is not that much greater than wine, I think. Offhand I can’t think of any safe to drink liquid with a density much over 1. The only room temperature high density liquid other than mercury I can think of is bromine - not recommended - and if I’m allowed hot drink temperature there’s gallium. Other than metals, glasses, carbon and ceramics, there’s remarkably little around us outside the density range 0.5 to 1.5.

Why not just use some semi liquid clay?

Or just drink the damn wine.