How aerogel is made and why it's so cool

Twice as dense as air? How dense is air? And while you’re at it, what’s your favorite color?

I think they used this stuff to gather cosmic dust in a probe. IIRC the probe had a hard landing when it came back down. Never heard what they gleaned from it.

Yes, that is in the video.

A cubic meter of air weighs a bit more than a kilogram, apparently. 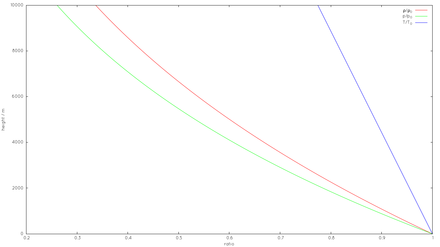 The density of air or atmospheric density, denoted ρ (Greek: rho), is the mass per unit volume of Earth's atmosphere. Air density, like air pressure, decreases with increasing altitude. It also changes with variation in atmospheric pressure, temperature and humidity. At 1013,25 hPa (abs) and 15°C, air has a density of approximately 1.225 kg/m³ (0.001225 g/cm³, 0.0023769 slug/(cu ft), 0.0765 lb/(cu ft)) according to ISA (International Standard Atmosphere).[citation needed] Air density is a proper...

It sounds weird to say, though one should keep in mind any air you might be holding is probably floating (along with you) in the bottom of a big sea of air we call the atmosphere.

At what altitude, what temperature, what level of humidity? Blue.

Cool, I’ll have to watch it later.

I always wondered what the stuff was and how it was made, this made it pretty easy to understand.

I could have sworn I saw something that looked like aerogel floating through the sky occasionally at Maker Faire though maybe I was just seeing things.

I remember this from reading awhile back about the creation of aerogels, that one of the processes by which they produce the silica gel is using a precursor called tetramethyl orthosilicate, which is a real baddie. It’s basically a liquid that deposits silicon dioxide when it reacts with water. So if you breathe the vapor, it immediately begins depositing silica crystals in the cells of your lungs. It can also blind you instantly.

There is a company offering an aerogel based building insulation which infuses a crushed aerogel powder into a polyester fiber batt resulting in an insulation batt that has about twice the insulation value per inch than the best foam insulations. Its expensive, but not prohibitive.

It’s like trying to figure out how heavy water is while diving. You’re in it so trying to lift it doesn’t really work.

My trials (in German)…
http://illumina-chemie.de/aerogele-part-1-(work-in-progress)-t4458.html

In short: It´s more complicated that it seems…

A new Batman villain is born

It’s too bad that making it requires the whole autoclave/CO2 thing. An aerogel 3D printer, hmm…

Looks like you got pretty close though! Was that for work or play?

Was for play…have the possibility to use (with knowing of the PI) the fume hood in the university where I work. So I can shift things which are not wise to make it @home to this place…

Made other syntheses in my basement: http://illumina-chemie.de/bis(25-di-t-butylphenyl)-34910-perylenbis(dicarboximid)-t3647.html where I think that the risk would be okay…

PS: Here a link to my “photographic and printing work” http://illumina-chemie.de/chemigrams-and-co-t4590.html
Most of the links in that thread are English…