How to decode the images on the Voyager Golden Record

Raises a good question. If you gave the voyager record not to aliens (because we don’t have any on hand) but just a seemingly random group with credentials that wold be logical to give weird astronomical junk to that have no knowledge of voyager’s record… could they work out how to play it using JUST the instructions posted on the side of voyager?

So things like this where you have someone that isn’t going to instantly know ‘oh that’s hydrogen electron oscillation and that is a pulsar cluster’ is good.

This is top-quality nerdery and I commend you for it.

I think here on earth it’d be hard to find the kind of people you describe (group who would logically receive astronomical junk) who didn’t have some prior knowledge of the voyager mission, or turntables, etc.

This record has fascinated me since I was a kid; what was on it, how did they choose the data, how did they encode it, expect it to be played and why couldn’t I ever find a list of the actual sounds and images?

Brilliant work decoding it, and kudos to the original scientists too. A Cryptic Crossword puzzle for an alien race that tells them how to solve it, with no human numbers or letters? Wow…

There are some weirdly cryptic images on that disc by the looks of it; and I’m from Earth.

Impressed with the nerdery but am I wrong in taking away the impression that as a device to give information to aliens, it kinda fails?

While JPL is not able to post the full gallery of images on the record, others not so terrified of offending the copyright gods have done so. The link below takes you to copies of the original images, presumably translated from whatever obsolete data format was used back in 1977 to JPG, rather than decodes off the record. Scanned from the long out-of-print book about the record, Murmurs From Earth. Kudos to Ron Barry for doing it the hard way. 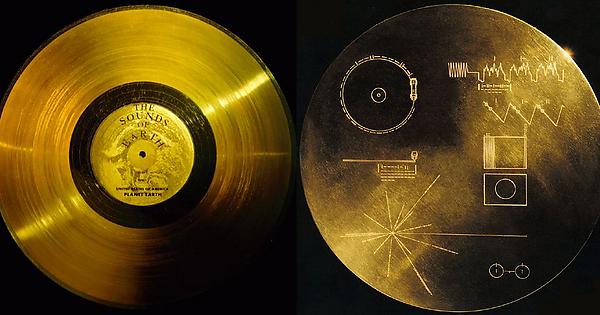 I think here on earth it’d be hard to find the kind of people you describe (group who would logically receive astronomical junk) who didn’t have some prior knowledge of the voyager mission, or turntables, etc.

You’re quite correct, but still something that needsto be kept in mind when doing these things.

impressed with the nerdery but am I wrong in taking away the impression that as a device to give information to aliens, it kinda fails?

This was in 1977. Digital encoding (for visual or audio) was just a gleam in Sony’s eye. Even the highest of high end supercomputers was hard pressed to depict full colour images at all. Voyager itself sent its picture data back in an analogue stream rather than as bitmaps, IIRC.

And the mandate was to put the message on the spacecraft in a format that would A, survive for millions of years of space travel, and B, not exceed whatever miserly weight budget (a few kg?) they were able to squeeze onto the spacecraft. An analog LP was really one of the most information dense data storage devices available at the time. Especially for encoding sound, it was really the only game in town.

I think at some point they decided they wanted to send sounds, and that meant they had to use the weight budget to send a record and record player. and phonograph stylus. Which meant that a collection of engraved plaques to convey visual and symbolic information as well was out. So they encoded the visual information they wanted to send on the record, using the technology available at the time.

This has always kinda blown my mind. There’s a bravery and optimism in executing something like this that I have trouble wrapping my head around. Visionary nerds rock.

About to have one of those moments when I get mad a Carl Sagan for dying all over again.

Well, we don’t want the B Ark types figuring out where we are now, surely?

I swear – that video could have been directed by David Lynch, and featured in Episode 8 of Twin Peaks: The Return.

Those low-quality copies of the images were not taken from the encoded data but most likely scanned from Murmurs of Earth, the 1978 book by the original Voyager Interstellar Record committee.

This was in 1977. Digital encoding (for visual or audio) was just a gleam in Sony’s eye

It looks like digital encoding was released to the public the same year.

It was probably developed too late for the Voyager record team to make use of it though.

If they were Aphex Twin fans, probably.

Ron Barry: is there a better way of getting the audio samples other than downloading the lossy mp3 file on soundcloud? Could they be uploaded to the google drive where your temp images are stored? I think it might be fun to try and play with this myself and working with the mp3 would be suboptimal.

Also, I’m sure this is not the best way to get things to Ron Barry. This seems to be his only contribution to boingboing. Anyone have any great ideas for this?

could they work out how to play it using JUST the instructions posted on the side of voyager?

I think the hope is that Voyager would be picked up while in space (as opposed to crashing into something which would make the point of deciphering academic)… meaning aliens with the know-how to be in space in the first place would have a much better chance of deciphering the instruction plaque than would some random group.