How to make a primitive cord drill and pump drill

“Look around, can you form some sort of rudimentary lathe?”
-Guy Fleegman, Galaxy Quest

His video where he builds a tiled roof hut is staggering.

His whole channel is inspiring and staggering. And his style of documenting his working process is quite great. I re-found his channel coincidentally just the other day, and couldn’t stop watching.

These types of drills - built with metal as well as wooden parts, are still used by some bench jewelers. With a little practice they can be operated one-handed if required. 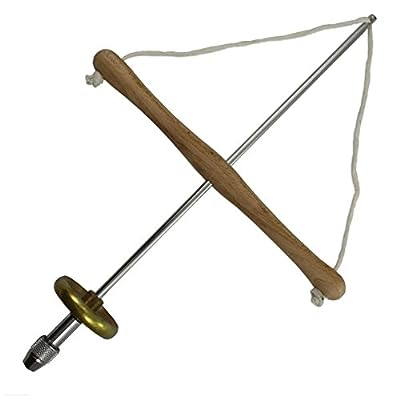 Twirl the string on the shaft and push down on the wooden bar, causing the drill to spin. Brass wheel is weighted , giving the required momentum to repeat bit like a yo-yo Supplied with an extra colle ...

They were featured on Make Magazine online a couple of years ago:

Yep, it’s mesmerising. I love the wordlessness. I subscribed a few months ago.

Agreed. Good inspiration to go bang up my knuckles for a bit.

The hardest part about making this drill is getting the hole in the rock without already having the drill!

A slightly more tech-advanced version:
http://www.garrettwade.com/garrett-wade-yankee-push-drill-gp.html
Threaded shaft and strong spring for return, in one convenient package. Bits are stored in the handle. I love my push-drill.

He’s lucky that the dirt in the area is fairly clay-rich, once you get below the loam level. My soil is too sandy; it I tried to do anything like that, it would fall apart.

I used to use these silversmithing - I preferred them vastly to pendant drills, although they really only work with the tinier drill bits.

Love this guys channel. The forge is a good one.

The amount of work and skill that went into his building is, to borrow your term, staggering.

But, the one thing that bothered me about the video was at the very end, when he makes the torch to show the inside of the hut. I appreciate that he only wants to use things in the video that he crafts himself, but he is filming himself with what I assume is a modern camera.

Using a flashlight would have better displayed his finished product.

However, this is a small gripe, and for me this video was mesmerizing.

Thank you for the link.

The culmination of the series, where he builds his own electric toaster from scratch, including a hyrdo-electric plant and pylons, is also staggering.

Watching how he created the grate for his mini-kiln, I think he formed the flywheel out of clay, then fired it like his roof tiles.