How to restore cast-iron waffle irons for fun (and waffles)

Way to go. Good job on that!

If you want to evenly space them, it's easiest to alternate between the Arctic and Antarctic. Some people just go to the Arctic twice, near the equinoxes so the visits are almost 6 months apart, but it's not the same.

If you’re ok with a complete “re-seasoning” of the pan, you should really take a look at electrolytic removal of the corrosion and contaminates. It’s easy, a cheap car battery charger, some scraps of steel, a plastic tub big enough to hold the pan, and some washing soda.

Here’s a random link to someone who did a good documentation of the process. The resulting gross orange water can be disposed of in the drain, it’s just rusty water. 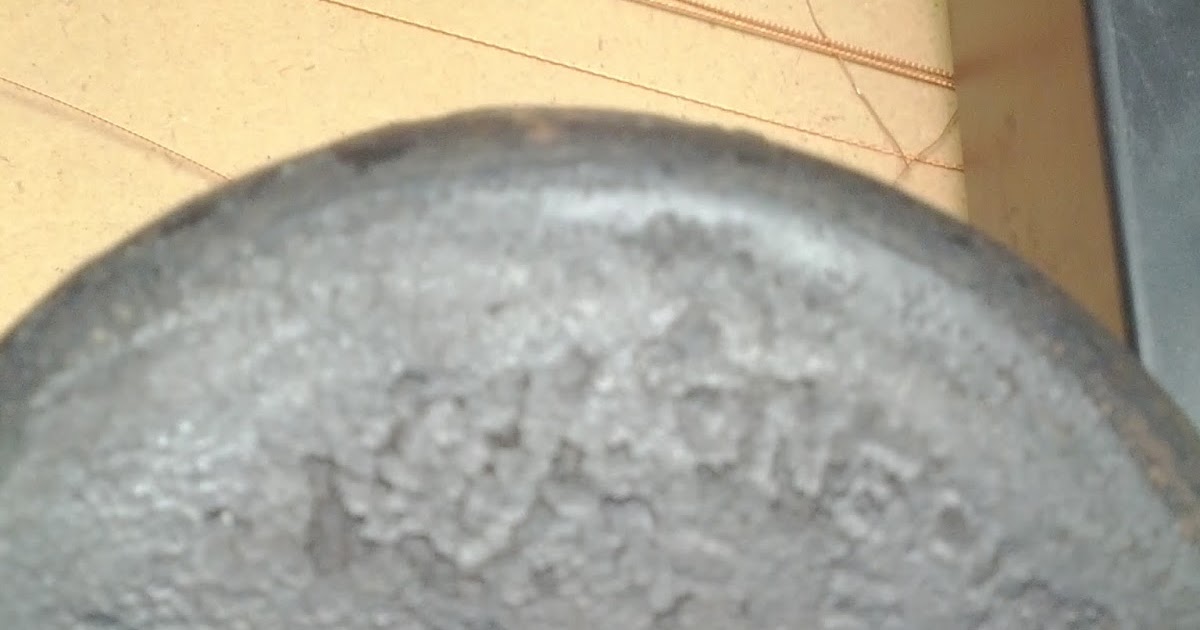 How to clean cast iron cookware with electrolysis

While out antique shopping about a week ago, Krissy brought home a nice Wagner #3 cast iron skillet from an antique mall in Delaware, OH.  T...

I use a food safe brush, like the kind you use for basting, for seasoning my grill pan. The bristle kind of brush is fine as long as it doesn’t drop a lot of bristles and you pick them off your pan. The silicone ones are not as good at putting down a really thin coat of oil but aren’t going to leave bristles behind. And don’t use your good brush on a hot pan, start with a cold/warm pan.

I understand that PAM-branded sprays of actual oil are a thing now, but standard PAM uses lecithin, an emulsifier.

I dunno what it will form,exactly, if you pyrolyze it, but I’ll bet it’s not the durable polymer that oils produce.

Also, be careful about caked-on grease in a self-cleaning oven. It can melt, overheat, and catch fire.

Ever watch someone try to extinguish a fire in a self-cleaning oven that has a high-temp lockout on the door?

It can be pretty amusing, assuming you don’t actually burn down your kitchen. (-:

Using a self cleaning oven, while easier, will inevitably result in a stinky house and likely a burnt out oven element. If you have patience, and live in a warm area, the best way to remove the burnt on organics is to use simple lye. Yes, it’s caustic, but it’s far less energy intensive and you can use it until it’s pH neutral and simply dispose of it.

Lye will remove the organics. If you are left with oxidation, you can either use electrolysis as aaronsb suggests or you can soak it in a mild solution of something to remove the rust. I like citric acid, available at beer and winemaking stores. Other more patient folks use a mixture of molasses and water. You can source molasses for animal feed at most feed and seed stores. Vinegar will work too.

For the love of Pete, if you hear someone telling you to burn off the caked organics by tossing it into a fire and heating it up to cherry red, ignore everything else they ever tell you about cast iron. Heating cast iron that hot is so close to it’s melting point that it will irreversibly change the makeup of the pan and you will never get a satisfactory seasoning on it again.

A bottle of pure lye - water - a six gallon homer type bucket with lid - let it soak for a few days - not done? Leave it longer.

You can keep reusing the solution for ages. Looking dirty doesn’t mean it won’t work.

Of course - I don’t have kids - so I can just leave that laying around.

I keep the solution in a 5 gallon bucket on the back porch with a lid snapped tightly on it. Keeps the kids and the critters out. If It’s going to be a while, I just use it like it’s drano. Of course, it’s getting harder to find straight lye, thanks to the tweakers.

Yeah I just wanted to second the ‘electrolysis’ thing… please don’t use the self cleaning oven… especially on a nice old Alfred Andresen heart iron… also, the handles weren’t made to withstand SCO temps (which vary a lot from one brand and model to the next). Lye and electrolysis are so much better. If you are serious about cast iron, follow the instructions at http://www.castironcollector.com/restore.php also lots of good info at the /r/castiron sub at Reddit.

and I know a little something about cast iron waffle irons. 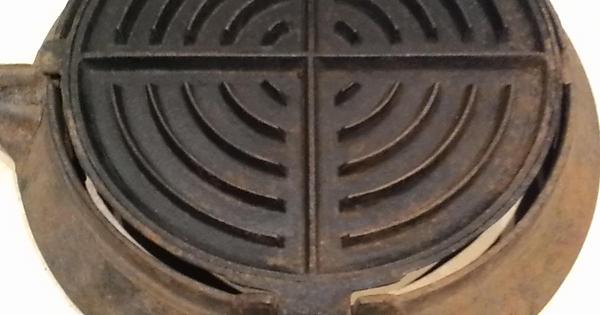 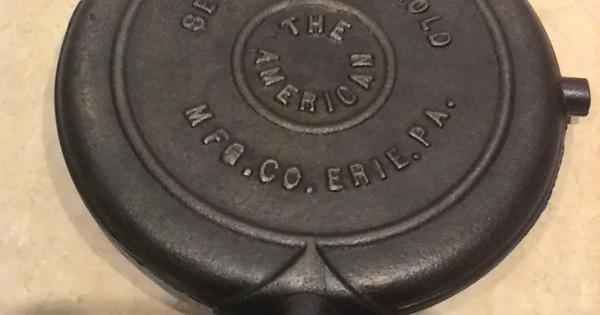 As this went from hobby to mania, cast iron started piling up around the house. I had to limit myself. I decided waffle irons were the way to go, and once I had restored a new one, it must be gifted away to friends who would appreciate it.

I totally went down this same path with old electric fans and Telechron clocks. I won’t spend over $10, and I only buy the really iconic ones, and I give them away after I restore them.

It sounds like you have a method that works a lot quicker than electrolysis (which I used successfully on my electric tractor mower deck restoration) and a lot less caustic nastiness than lye (which I use yearly to clean my firebox windows).

the handles weren’t made to withstand SCO temps (which vary a lot from one brand and model to the next).

Assuming that the handles are cast iron, they’re made of EXACTLY the same material as the rest of the pan, and are certainly capable of withstanding SCO temps. They’re cast. From iron.

I’ll agree that cleaning temps vary, but they’re in the range of 900F +/-100F. Cast iron melts above 2100F. It’s pretty safe, in the hottest of self-cleaning ovens on the planet.

likely a burnt out oven element.

I’ve never, ever heard of this happening. I’ve cleaned two full oven shelves of iron, without it happening. “Likely” is simply not true.

I like the sound of your method, but there’s really no reason to shy away from the oven method - as long as you clean them well, as the article noted, and have the windows open (because: burn odor).

Lovely stuff. My oven is fine. Temps aren’t so high it has ever damaged anything. Iron needs to get a lot hotter than my oven to damage it. Does a fine job of baking off the seasoning tho.

Other people’s experiences may vary.

The author uses a spray bottle to apply the light layer of oil, but I do it with a rinse under hot water for the first coat - which is the easiest to overdo, because there’s nothing but the surface texture to hold the oil (the polymer layer built up by “blackening” tends to get “thirsty” for oil in at least the next few coats).

No soap; just rinse off the oil with hot tap water, and you’re good to go. After that, I use a paper towel to spread the oil, and a dry towel if I get too much on - but as I mentioned, it’s much more tolerant in those layers.

Some of us don’t have self cleaning ovens too.

We love cast iron here at Serious Eats. We know many of our readers love it too. And for those who are really, really serious about it, the next step is to go vintage. But just how do you fix up a rusted century-old pan? We went to a pro to find out.

If you’re going to burn things off and you don’t have a self cleaning oven or just want the smoke and stink outside. A grill, particularly propane works well. But heat alone doesn’t seem to good at stripping the season entirely, even if its fairly good at burning off crud. And it doesn’t remover rust or other issues. Just burns off the carbon and food deposits. And much of the season. Pretty much exactly like preheating your grill before you clean the grates does.

I understand that PAM-branded sprays of actual oil are a thing now, but standard PAM uses lecithin, an emulsifier.

That does not mean its not an oil. It means its contains an emulsifier to keep the oils its made of combined and flowing smoothly. It also contains an anti-foaming agent, and it looks like rosemary extract as a preservative.

I’ve heard any one of them can lead to a weak, short lived season. But it won’t harm the pan to use it. And it does create a season that’s otherwise identical to any other oil.

It works, but its messy (smokey house), hasn’t seemed totally effective when I’ve tried it, and requires an electric oven with self clean cycle or propane grill.

I have a bucket on the patio with my lye / water. I got the lye at a local old school hardware store. Those old hardware stores are about my favorite shops on earth.

So for applying the cooking oil, can we just immerse the thing in a tub of oil and then let it drain?